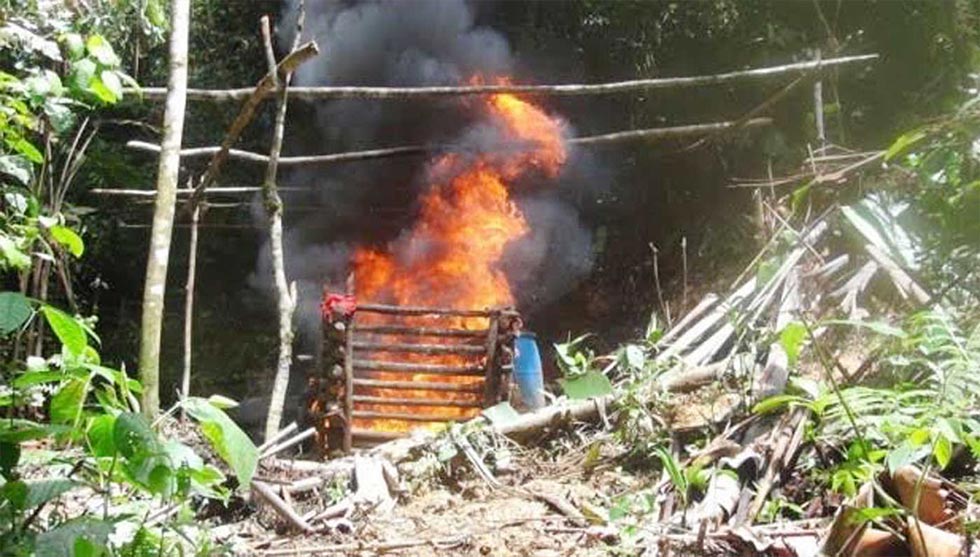 The operation led by the Air Force and National Police blew to pieces 104 laboratories used to process and manufacture raw coca leaf into coca paste.

According to the police, the labs in the Guaviare province had the capacity to annually produce 100 tons of cocaine, or 15% of the country’s estimated total annual potential production.

Soldiers then carried out a major ground offensive trying to assume control of the areas around the labs.

In this operation, 1.7 metric tons of cocaine base, 66 liters of liquids for processing, 5.6 tons of materials and 38.080 kilos of soaking coca leaf being prepared for processing.

In the area, several of Colombia’s most prominent illegal armed groups are active, among them the dissident 1st Front of the FARC.

Three presumed guerrillas, allegedly belonging to the 1st Front, were arrested in the operation in spite of and ongoing bilateral ceasefire between the government and the guerrillas.

The first front made headlines when they announced their refusal to demobilize if peace talks with the administration of President Juan Manuel Santos are successful.

The FARC leadership subsequently expelled the front from its organization, which in June signed a bilateral ceasefire with Santos in anticipation of the final peace deal.

The expulsion made the 1st Front immediately vulnerable to air strikes.

The government’s massive military operation shows other possibly doubtful FARC fronts the military can attack individual fronts if the guerrilla units do not obey orders to demobilize and disarm.

The Santos administration and the FARC have been negotiating peace for more than four years.

In return for political participation, the FARC has vowed to abandon drug trafficking and other criminal activity the guerrilla group has used to fund its 52-year-long war with the state.