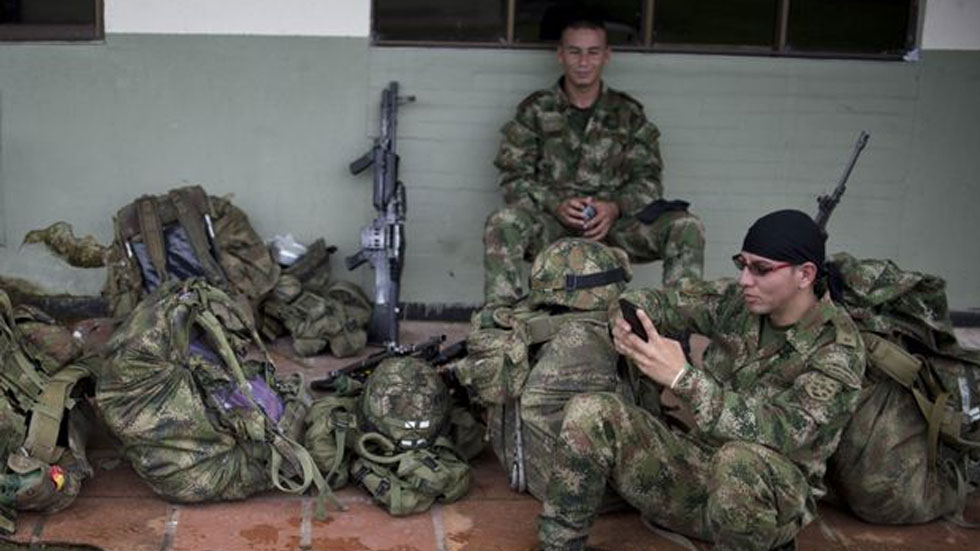 Colombia’s military is failing to enter former FARC territories, effectively allowing paramilitary groups and drug gangs to fill the void and set in motion a new wave of terror, homicides and forced displacement.

In November, the Colombian government signed a final peace agreement with the FARC in which it agreed to provide protection for demobilized guerrillas and secure areas formerly held by the FARC, basically fulfill its constitutional duty.

Virtually all FARC guerrillas, with the exception of dissidents, are either in pre-grouping areas or the demobilization and disarmament camps they were scheduled to move into after signing peace in September last year.

So many words, so little action

During the FARC’s demobilizaiton, the military would embark on “Plan Victoria” and effectively take territorial control and allow the installment of civilian authorities as part of the peace deal with the FARC, as soon as possible without endangering a ceasefire announced in August last year.

However, both President Juan Manuel Santos and the military have failed to keep their word, leaving a dozen civilians dead already, more than 150 displaced within the last few days, and hundreds of thousands of Colombians either in, or at risk of, paramilitary rule or turf wars.

“The message is very clear: Any criminal who believes he can take over the territories will find the presence and perseverance of our security forces and the State there.

Multiple witnesses from former FARC areas have told Colombia Reports that military activity in these territories has been either non-existent or limited at best in spite of international pressure.

In both June and November last year, the United Nations warned of the emergence of paramilitary successor groups and turf wars as the main threat to peace once the FARC had demobilized..

Todd Howland, a representative for the UN High Commissioner for Human Rights in Colombia, said that killings have been on the rise.

“We are observing on the ground that there are many post-paramilitary groups that are entering various parts of the country. The FARC are leaving power gaps without transforming the illicit economics. Greater government effort on this issue is needed.”

The government apparently made no greater effort and the killing of local leaders has only increased since then.

According to the United Nations, almost 100 families fled into Venezuela at the end of the week after being forcibly displaced by various illegal armed groups.

Locals recently blocked the demobilization of the local FARC front, claiming that they had already been threatened by the “Aguilas Negras,” a paramilitary group that, according to the government, doesn’t exist.

Colombian Defense Minister Luis Carlos Villegas subsequently promised to deploy more troops to Catatumbo in response to the farmers’ worries. On Monday, he announced the addition of 2,200 additional soldiers to the region.

But after having been caught making multiple false promises, hardly anyone has confidence in the minister responsible for a peaceful transition of power in former FARC territory, but which is evidently failing.

Jhon Jairo Jacome, editor of local newspaper La Opinion, challenged the minister. Jacome told Colombia Reports that if it were true that 6,300 soldiers already were stationed in Catatumbo — as the minister had claimed — they would already be able to control the approximately hundreds of members of illegal armed groups active in the lawless area.

“This is just one of those announcement that they make from Bogota. It won’t end up becoming a reality.”

President Juan Manuel Santos has assigned 4,000 soldiers to Putumayo, according to Caracol Radio. Military Commander Juan Pablo Rodriguez said that most of these forces have already been deployed.

However, none of the sources consulted by this website could confirm any significant military movement, and none held much faith in the national government or the military’s promises to provide security, leaving the civilian population exposed to a major paramilitary expansion by the AGC, turf wars, and civilians taking the law into their own hands.

Local journalist German Arenas told Colombia Reports that there has been no visible military presence in Putumayo since the FARC moved into their demobilization zones on February 2.

He attributed this in part to the sheer expansiveness of the areas left behind and the difficult terrain.

“The areas are very large, with lots of jungle, and sometimes the army isn’t familiar with the zones or how to move through [them],” he said. “The truth is that people here aren’t expecting the army to arrive.”

Arenas notes that the region has experienced relative peace since July 2015, but communities have grown concerned now that the FARC have left.

“The worry in the communities is that crime is arriving, acts of robbery, assault, muggings, things that when the FARC were here weren’t occurring because the FARC would punish offenders,” he said.

“There is no state presence in [Putumayo] right now. The areas are unprotected.”

According to Arenas, the Constru drug trafficking group has simply filled the void left by the FARC in Putumayo, despite the fact that the defense minister declared them completely wiped out in December.

“Constru is continuing to operate more strongly than before and have made it clear that they plan to control the zones left behind by the FARC, to dominate the territory and control the coca business,” Arenas said.

Bordering Ecuador and Peru, and home to 20,000 hectares of coca according to Usme, Putumayo is a key area for drug trafficking routes.

“The Constru will very surely threaten farmers who comply with the substitution of [their] coca fields,” Arenas continued.

Earlier this month the Colombian army entered Ituango, one of the FARC’s most important strongholds and a major cocaine corridor..

A local resident, who also asked to remain for security reasons, told Colombia Reports that the country’s main paramilitary group, the AGC, has also entered the region.

The paras held a meeting in one community. When a community member called the Governor’s Office to denounce their presence, the paras held another meeting shortly after asking why someone had made the call, asking what they had done wrong.”