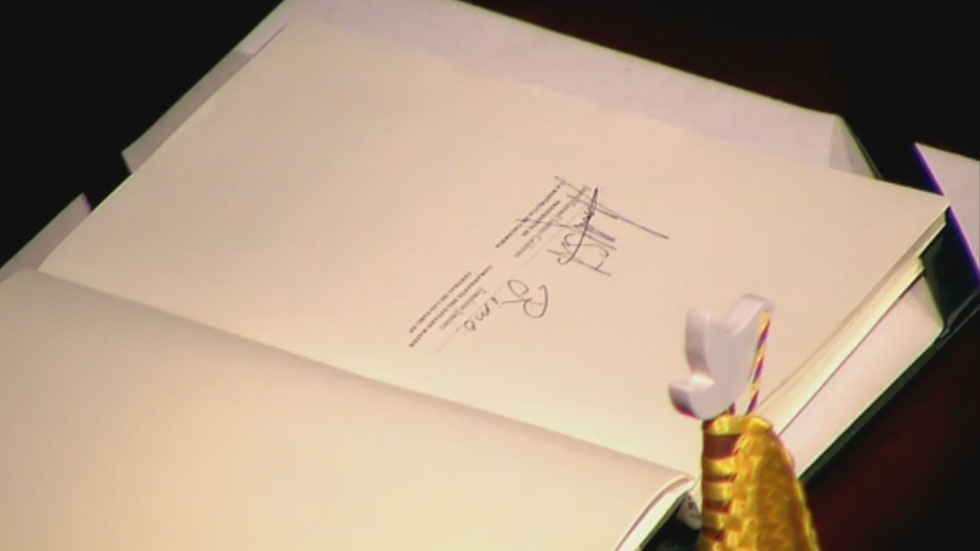 The president and the FARC leader signed the deal in a low-key ceremony in Bogota’s Colon Theater, without the presence of world leaders who had amassed to take part in the initial ceremony.

That peace deal, however, was trashed in a referendum days after the formal signing and the government was forced to renegotiate terms, hoping to receive increased support.

After having integrated a lot of “adjustments and clarifications,” Santos was able to sign peace for the second time.

“The FARC, as an armed group, has ceased to exist.” Santos, for the second time, said upon signing.

Londoño, whose nom de guerre was “Timochenko” said the agreement “put a definite end to the war so we can confront our differences in a civilized manner.”

As both men shook hands at the signing, there were loud cheers and applause from those in attendance as many hope that this revised deal will finally bring an end to the saga.

“We can turn the page on violence,” Santos declared in his address as he praised the “persistence” of the negotiating teams.

FARC leader Timochenko declared, “the word should be the only weapon in Colombia”, adding that the new deal accommodated “the concerns made by many sectors” of the society.

Despite the controversy surrounding the deal, many international observers have praised the efforts of the two sides for reaching a compromise after almost five years of negotiations.

“In a world convulsed by conflicts, people praise us for having achieved peace,” stated Timochenko.

Because the initial deal was rejected by Colombia’s voters in an October 2 referendum, just days after its first signing, the renegotiated deal will now be put to congress for ratification next week.

The new deal will be fast-tracked in order to have it ratified by Congress before their Christmas recess, thus enabling the process of demobilization to begin for the left-wing rebels.

The first deal was rejected by public referendum with former President Alvaro Uribe leading the “No” vote campaign.

The former president, embroiled in scandals involving war crimes that will be tried in the post-conflict transitional justice system, has also rejected the second version of the deal.

Successful implementation of the deal would bring Latin America’s longest running internal conflict, which has displaced millions from their homes and caused the deaths of at least 260,000 people, to an end.