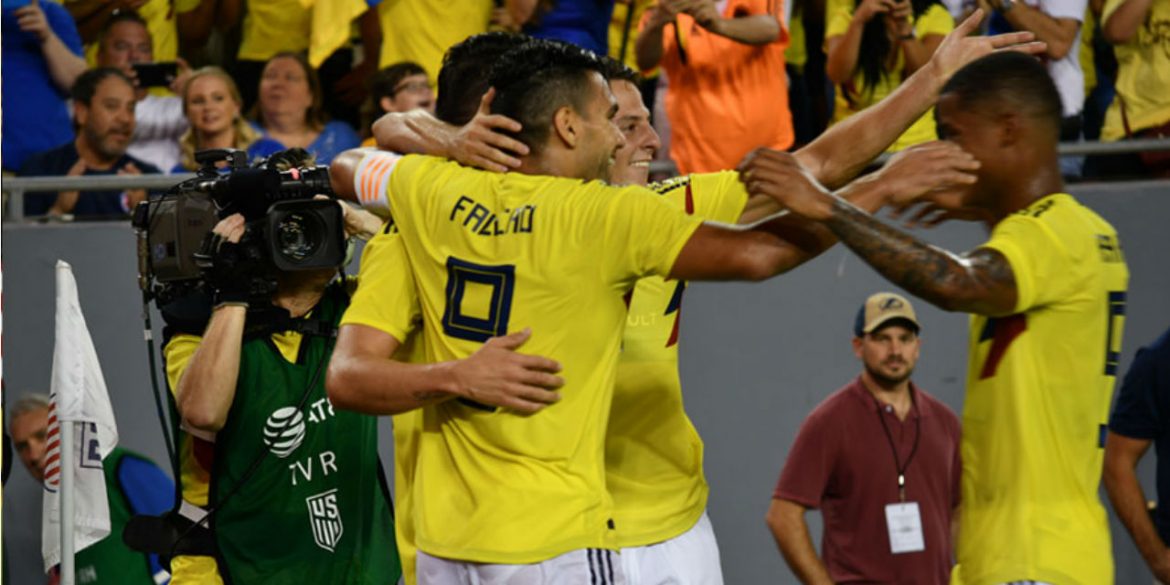 Colombia’s national football team on Thursday secured a 4-2 victory over the United States in a thrilling friendly encounter in Tampa, Florida.

Despite being punished for a couple of defensive lapses, three second half goals added to a first half stunner by James Rodriguez were enough to see Arturo Reyes’ side run out comfortable winners with the Colombians’ attacking quality shining through in the end.

Caretaker coach  Reyes said this week that “our idea is that the majority of players get minutes” in this series of friendlies but still opted for an experienced starting XI for the clash with the US at the Raymond James Stadium.

Despite the absence of defenders Yerry Mina, Cristian Zapata and midfielder Carlos Sanchez from the squad, Reyes called on the experience of the likes of James Rodriguez and Juan Cuadrado in midfield and opted to pair the veteran duo of  Radamel Falcao and Carlos Bacca in attack.

“Los Cafeteros” dominated the opening exchanges and team captain Falcao should have given them the lead in the 3rd minute but the Monaco striker blazed over the crossbar after getting on the end of an inch-perfect Santiago Arias cross.

The US responded in the 16th minute when Julian Green cut in from the left and unleashed a powerful shot but the ball just  flashed past David Ospina’s post.

Colombia broke the deadlock in spectacular fashion in the 36th minute when Rodriguez curled a sublime effort into the top corner of the hapless Zack Steffen’s net seven years to the day after his international debut.

Falcao almost doubled the lead three minutes later but his half-volley was batted away by the Columbus Crew net-minder.

As the US struggled to contain wave after wave of Colombian attack, James almost registered a second in the 40th minute after being put through by Cuadrado but his close-range effort was cleared off the line.

Colombian right-back Arias was a constant thorn in the US side throughout the first half and almost scored just before the break as he fired into the side net after sneaking into the box following intricate link-up play.

The US started the second half with real intent and were level within five minutes when Kellyn Acosta took advantage of a lapse in concentration in the Colombian defence to ghost into the box and finish past Ospina.

In a remarkable few minutes, Colombia pushed forward hoping to restore the lead but Matues Uribe coughed up possession cheaply in the midfield with US striker Bobby Wood capitalizing to fire his side 2-1 up in the 53rd minute.

The diminutive attacker made an instant impact releasing Arias down the right with a slide-rule pass in the 56th minute with the Atletico Madrid star pulling the ball back for Bacca who cooly slotted past Steffen to restore parity.

Quintero again turned provider in the 75th minute when he got on the end of a Bacca flick to put Falcao through. Colombia’s record goalscorer made no mistake as he fired his side back into the lead.

Substitute Miguel Angle Borja put the result beyond doubt in the 78th minute when the Palmeiras striker converted an excellent James cross with a spectacular overhead kick to make it 4-2.

Colombia continued to search for a fifth and Quintero went close in the 80th minute as he saw his fierce drive come off the post with Borja denied a second in the 87th minute as Reyes’ side finished strongly to secure the win.

While Colombia’s temporary coach will be disappointed with the defensive lapses that allowed the US back into the game, he will be pleased what was a devastating attacking display.

Colombia will take on Costa Rica next Tuesday in New Jersey as the post-Jose Pekerman rebuilding project continues.