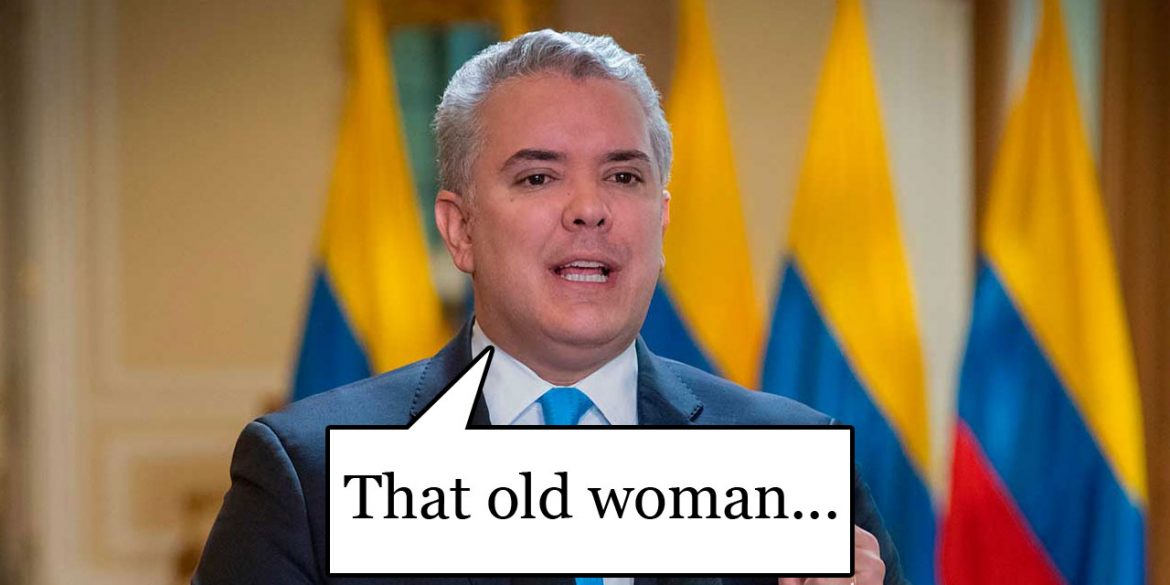 Colombia’s President Ivan Duque sunk Congress into chaos on Monday after forgetting to formally open the congressional year and referring to the opposition spokesperson as “that old woman.”

Duque had three tasks to fulfill on Colombia’s Independence Day; hold his inaugural speech, formally open the congressional new year, and listen to the opposition’s rebuttal.

The president screwed up two of those tasks as the he refused to go to Congress because of the COVID-19 pandemic and tried to fulfill his constitutional obligations via video platform Zoom.

Duque successfully held his inaugural speech after which his video link switched to an image of the presidential palace and everything went wrong.

As the country cringed, Senate president Lidio Garcia and Senate secretary Gregorio Eljach tried to call back the president and remind him to formally open the congressional year.

Ivan Duque: “Our challenge is that history will remember us as a society that was able to think big, to see beyond the difficulties and understand that only together we can build a country. Thank you very, very much.”

(sound of footsteps, mumbling and a barking dog at the palace)

Lidio Garcia: “I ask the technicians to turn on the sound of the president to declare the sessions of Congress as opened, please.”

(inaudible mumbling at the palace)

As if Duque hadn’t embarrassed himself enough, his video connection remained black, leaving opposition Senator Aida Avella (Patriotic Union) in the dark as to whether the president was complying with his constitutional obligation to listen to the opposition’s rebuttal or not.

After complaints by Avella and opposition Representative Katherine Miranda (Green Alliance) that the president’s video link showed he was not taking part in the session on the virtual Zoom platform, Vice-President Marta Lucia Ramirez published a video of Duque “respectfully listening” the opposition’s rebuttal.

Ramirez quickly deleted the tweet after it showed the president referring to the opposition senator as “that old woman,” infuriating the opposition and further embarrassing himself.

On days like this I am ashamed to be a congresswoman.

Fortunately for Duque, Colombia’s leading newspaper, El Tiempo, is owned by the president’s financial patron and falsely reported that “responsibility reigned at the opening of Congress.”