Victims lay out demands for justice for mass kidnappings by guerrillas

For the first time in history, victims of the FARC publicly confronted former guerrilla commanders with the suffering caused by their crimes against humanity.

The three-day confrontation was part of the restorative justice process led by war crimes tribunal JEP in relation to the FARC’s kidnapping practices.

During the marathon session, seven members of the FARC’s central command accepted responsibility for the kidnapping and forced disappearance of more than 21,000 people.

Dozens of victims confronted the former guerrilla commanders with the suffering caused to those who survived the kidnappings and the families of those who never returned. 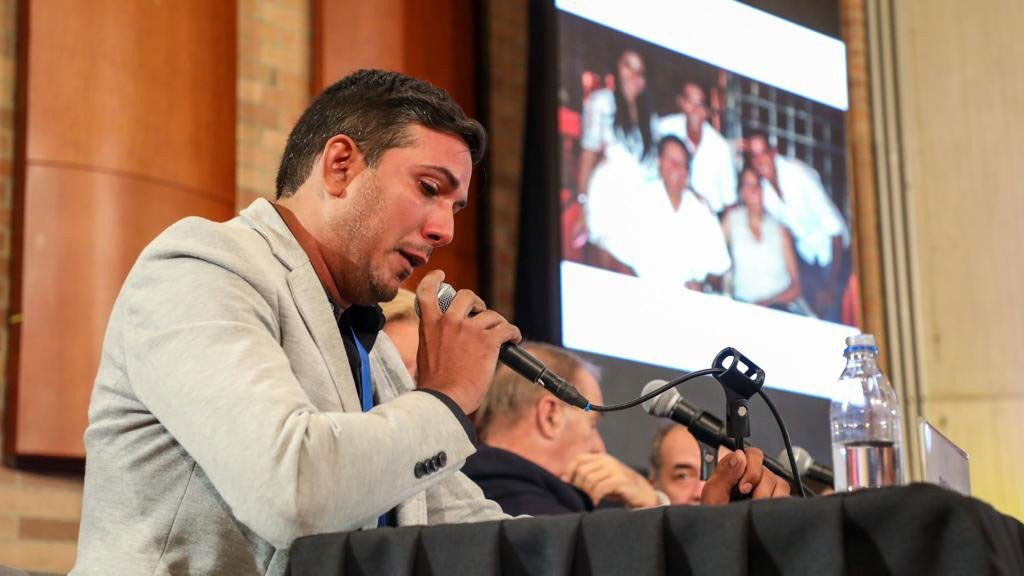 Jonathan Mulford was kidnapped with his mother and brothers in 2000 when he was only 15 years old.

The FARC’s leadership authorized kidnapping as a means to finance its guerrilla organization in 1982, which triggered a surge of kidnappings.

Kidnapping victims and the families of victims who didn’t survive their kidnapping demanded demanded justice for the suffering caused by the FARC.

Hector Angulo from the central Cundinamarca province told the former FARC commanders that his family has been tortured by feelings of guilt after finding the remains of their mother who was kidnapped with her husband in 2000.

Apparently, guerrillas forced Angulo’s father to bury his wife in the jungle while their children were scrambling to pay the ransom fee.

Former Congressman Gonzalo Botero, who was kidnapped by the FARC in 1991, told the former guerrilla leaders that the FARC financially ruined his entire family.

The family spent decades paying off the debts they assumed to pay the $4 million demanded by the FARC to spare Botero’s life, the former politician said.

After my release, Mr. “Martin Caballero” declared my family a military target. As a result, the 35th Front assassinated four of our workers in Sucre, all because of the these innocent farm workers’ “crime” of working for the Botero family.

Jonathan Mulford said that his father, a former dairy farmer, was too afraid to return to the countryside until last year after the guerrillas kidnapped his entire family in 2000.

Italian immigrant Danilo Conta said he spent the past few decades “waiting for death” after losing his livelihood as a consequence of his kidnapping in 1996.

Former FARC commander Pastor Alape broke down crying while admitting responsibility for the 2001 kidnapping and death of the brother of poet Maria Mercedes Carranza, who committed suicide in 2003 because of the FARC’s failure to return her brother alive. 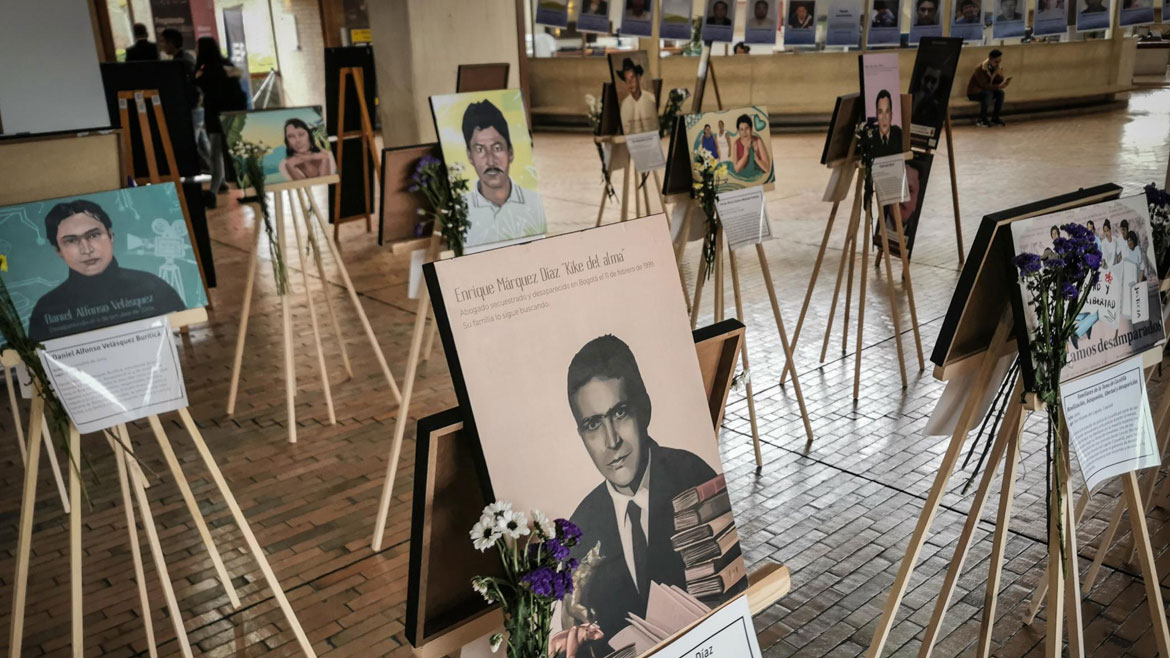 Victims filled the lobby of the Virgilio Barco Library with pictures of kidnapping victims who were forcibly disappeared. (Image: JEP)

The FARC intensified their kidnapping practices in the late 1990’s in order to expel state authorities from rebel territory and subjugate rural communities to guerrilla rule.

More than half of the 3,000 registered victims of the FARC’s kidnapping practices were deprived of their liberty as a form of  imposing social and territorial control, according to the JEP.

The treatment of these kidnapping victims was particularly cruel as they were forced into slavery, tortured and/or assassinated only for being from a different part of the country.

One anonymous kidnapping victim testified she was raped by three guerrillas after they chained both her arms and legs.

Another anonymous victim said he was forced to slavery to pay off the “debt” he “owed” the FARC for the food and medical while held hostage on suspicion of being a paramilitary informant.

The fathers of Aura Saavedra and Menfis Molano were forcibly disappeared after they were stopped at a guerrilla in the central Meta province in March 2005.

My father’s partner was pregnant. What happened to kidnapped women who were pregnant?

Vladimiro Bayona demanded that the former FARC commanders not to let him die without giving his son, who was kidnapped in 2000, a Christian burial. 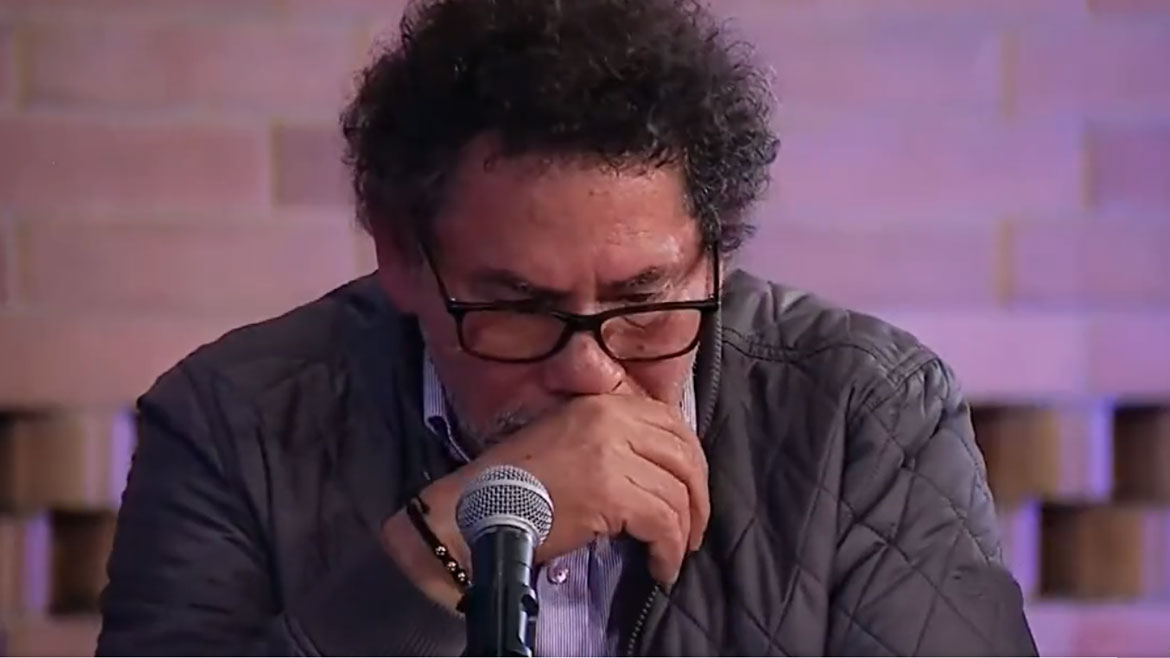 The FARC’s leadership decided in 1997 not to release captured policemen and soldiers, but hold them prison in jungle concentration camps in order to negotiate an “exchange” of captured guerrillas.

After the government refused, the guerrillas decided in 1998 to also kidnap politicians in an attempt to force a “prisoner swap.”

Some military officials were held hostage for more than 14 years, many were executed while trying to escape or died because they were denied medical aid.

Clara Rojas, the assistant of former presidential candidate Ingrid Betancourt, gave birth to a son who was subsequently taken away from their jungle prison.

Many of the “political” hostages were subjected to psychological and/or physical torture, the FARC commanders admitted.

This war made us lose our common sense. 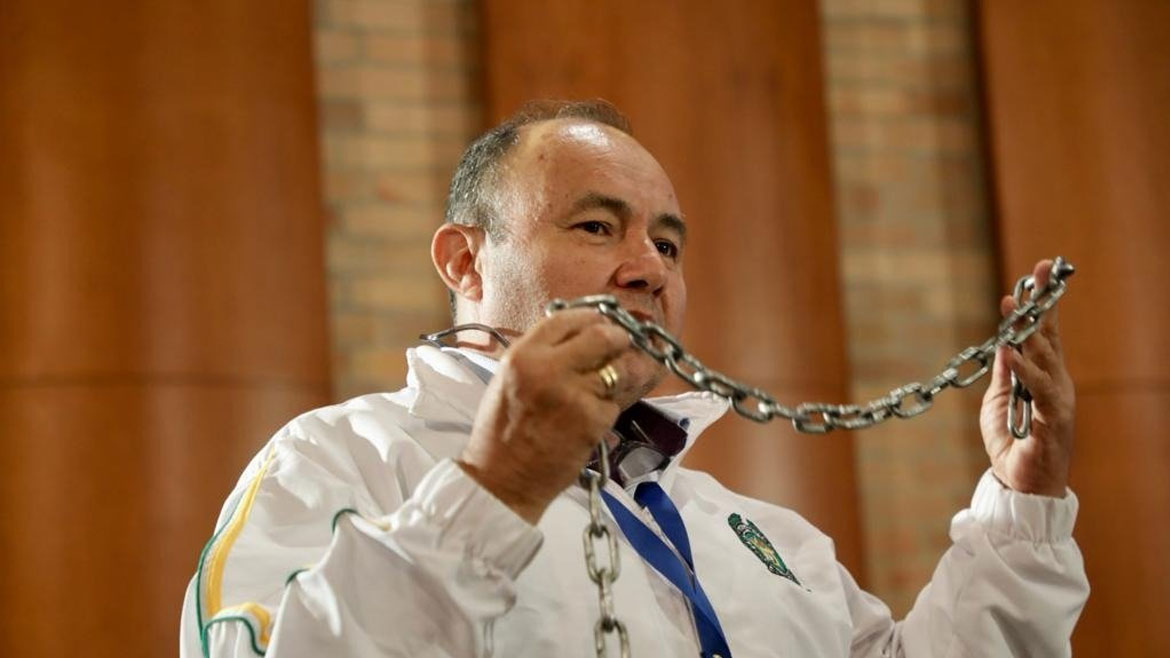 Retired police sergeant shows the chains he was in for more than 13 years. (Image: JEP)

The victims additionally deplored the neglect of the State, which revictimized many of the FARC’s kidnapping victims.

According to Anyela Sierra, whose father was among the policemen who was forcibly disappeared by the FARC, the wives of soldiers and policemen “were stripped of their income.”

Police officer Olmes Johan Duque said that he continues to be bullied by his colleagues about the sexual abuse he suffered while being held hostage by the guerrillas.

I don’t know if you guys go to bed quietly or if you sleep because I don’t. I have to take medication to sleep or stay calm.

Former deputy Sigifredo Lopez blasted the prosecution for throwing him in jail for half a year in 2012 on bogus charges that he helped the FARC coordinate the 2002 kidnapping of 12 deputies from the Valle del Cauca province of which he was the only survivor.

Many of the FARC’s kidnapping victims said that the National Victims Unit neglected to recognize them as victims after Congress approved the 2011 Victims Law that gave them rights to reparations.

What’s next for victims?

The JEP hearings are part of a restorative justice process that seeks the active collaboration of the former guerrillas and the surviving victims of their kidnapping practices.

War criminals who fully cooperate with justice will be given sentences that contribute to the effective reparation of their victims.

Any war criminal that fails to fully cooperate will be sentenced to prison in accordance with common criminal law.