Millions of Colombians took part in spontaneous and euphoric celebrations after their national team — for the first time in soccer history — reached the quarter finals of the World Cup.

The celebrations broke out just before 5PM local time after the whistle blew for Colombia – Uruguay in which “Los Cafeteros” convincingly won a ticket to compete with Brazil, who earlier in the day beat Chile in penalties.

Following the final whistle, tens of thousands of Colombians took to the street and drove around waving flags and balloons, while blowing horns and spraying foam, amid blasting stereos.

The Colombians’ celebration was due to a historic moment in national sports history. Never before has the South American country reached a World Cup quarter final. The previous record, reaching the 1990 eighth finals against Cameroon, had already been equalled by the current team. To make the euphoria even bigger; the country had to wait 16 years to even qualify for one of the world’s most popular sports tournaments.

According to Colombian President Juan Manuel Santos, the victory secured a “historic day” for the country. “All of Colombia is supporting our team, all Colombia is feeling proud of our team. When you think and act big you reach the goals,” said Santos.

As Colombians from all over the country and from all social classes took to the streets and social media to express their joy, Colombians renowned abroad also made their happiness public.

Actress Sofia Vergara of the ABC sitcom “Modern Family” posted a number of photos on Twitter, one of them reminding Colombia is “your daddy.”

Singer Shakira praised striker James Rodriguez, who she confirmed to be the best player of the World Cup ongoing in Brazil.

Many, but no major disturbances after victory

Local media and authorities reported a large number of, but no major disturbances around the game.

In Bogota, the police said it had to attend more than 270 brawls. The authorities are set to present a full report on public security around the game on Sunday.

MORE: Reactions On The Streets Of Medellin (JAP-COL)

Nine people were killed in the capital after Colombia’s first match in the World Cup and two after the second match.

Both cities subsequenlty imposed a temporary alcohol ban on match days after which deadly violence decreased. 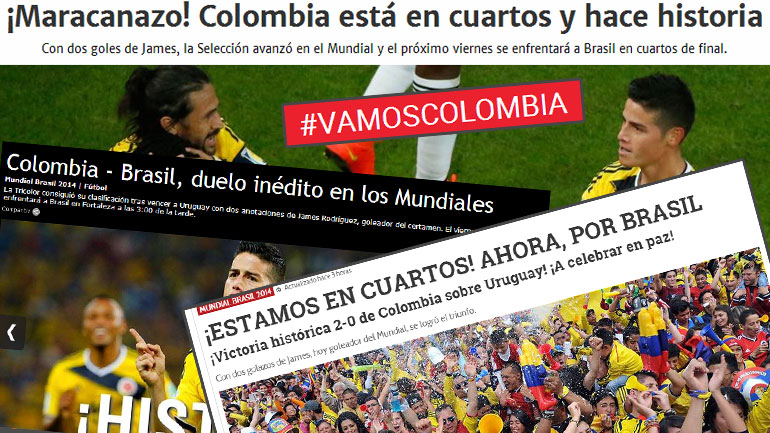 Colombia’s national news outlets were short of superlatives to praise the soccer victory over Uruguay.

“What more could we ask of life, of soccer, of God,” Medellin newspaper El Colombiano rhetorically asked at the end of their match report on the “historic classification.”