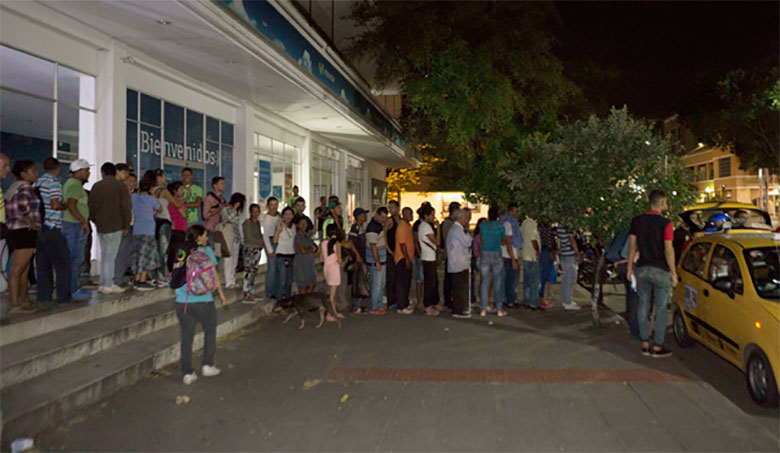 It is unclear how Colombia is dealing with the tens of thousands of people from Venezuela fleeing an ongoing economic, social and political crisis in the neighboring country.

Colombia’s migration authority said in early July that between 100,000 and 140,000 Venezuelans were presumed to be staying in the country illegally after either entering Colombia illegally or failing to timely return to their home country.

Another 50,000 were reported to stay in the country legally.

A much larger number of Colombian citizens has been crossing the border without any monitoring whatsoever.

Situation in Venezuela and at the border far worse than I expected. Hundreds passing over to Colombia every minute;…

The government of President Juan Manuel Santos seems to have no policy in place to deal with those staying in Colombia, leaving local authorities and civilians to deal with the influx of Venezuelans and Colombians.

Foreign Minister Maria Angela Holguin announced last week that “we are responding with all state bodies.” There exists, however, no indication this is actually happening.

Regional authorities in the border region have been downplaying the seriousness of the situation, causing clashes with mayors who are left to deal with the ongoing exodus.

What is happening is that people are arriving looking for transport to go to Ecuador or Peru, but as they find no transport they have to sleep in the streets.

There are no shelters in the border regions and, according to newspaper La Opinion from the border city Cucuta, locals rather than state authorities have been feeding starving Venezuelans.

Additionally, hospitals in the border area have been making major losses providing medical aid to sick Venezuelans without being able to recover the made costs.

How bad is the situation?

Colombian border authorities have been reporting an influx of between 2,500 and 25,000 Venezuelans a day, not counting Colombians crossing the border.

The only absolute number that has been released is that of the estimated 100,000 to 140,000 illegal immigrants. Government statistics on Colombians returning to their native country do not exist.

A survey done together with the International Organization for Migration (IOM) in July said that Venezuelans make up 33% of people crossing the border. The remaining 67% were Colombians. Almost half of those crossing the border were children and minors.

The same survey said that 65% of those crossing the border only do so to food buy products or seek medical aid no longer available in Venezuela.

Almost a quarter of surveyed migrants, Colombians and Venezuelans alike, said they planned on staying in Colombia for a few months. Another 5% said they intended to stay indefinitely while another 3% said they planned to travel to other countries like Ecuador or Peru.

These statistics were later contradicted by the director of the migration office.

However, with no national authority monitoring the return of some of the 6 million Colombians living in Venezuela, there is no saying to what extent the crisis in Venezuela is affecting its neighboring country.