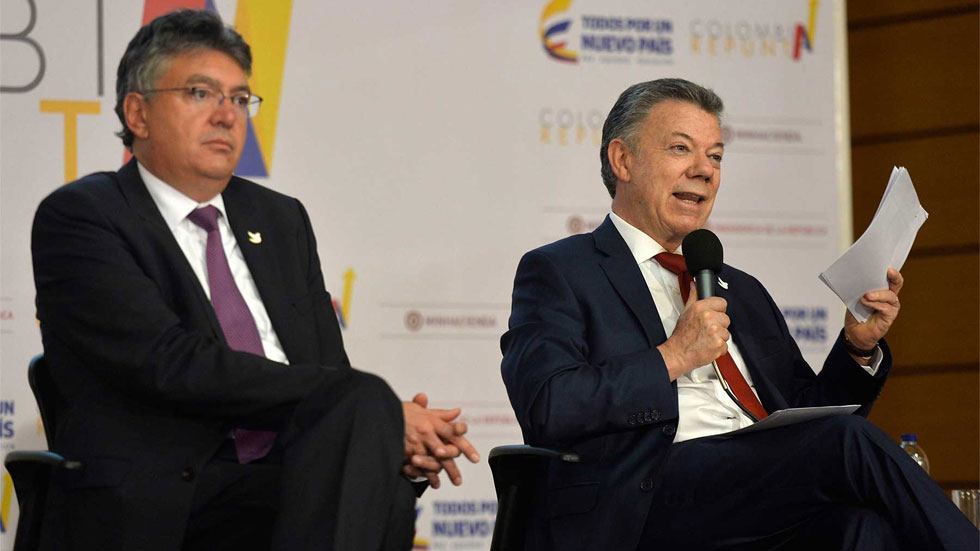 Ahead of presenting Colombia’s worst economic growth rate since the banking crisis, the country has prepared an economic strategy to “rebound” from the burst commodity bubble.

For years, Colombia was able to present impressive economic growth statistics because investment in and royalties from crude oil were skyrocketing. However, when commodity prices started dropping in 2014, so did Colombia’s economic growth rate.

Facing a steadily dropping GDP growth rate since 2013, Santos announced to aim for a rebound to 3.3% for 2017 after two years of austerity and increased taxes.

The growth rate for 2016 is yet to be announced, but expected to be either 2% of slightly lower.

This forced Cardenas to impose painful fiscal austerity measures in 2016 and 2017, because while Moses told the Pharaoh to build silos during the seven years of abundance because God told him seven years of famine would follow, the finance minister had not advised such thing to Santos.

The government also failed to adequately stimulate industries whose exports were suffering because the demand in oil boosted the price of the peso, hurting exports across the board and limiting investment, profits and growth in agriculture and manufacturing.

To replace the government oil revenue, Colombia last year imposed a new tax system in an attempt to fill the governmental coffers with $2 billion this year.

Hoping the new tax system works in favor of the treasury in spite of absurd levels of tax evasion by the elite, Santos vowed to stimulate the economy by returning to Keynesian economics, partially abandoning the neo-liberal model.

Instead on depending on foreign investment, the Colombian government will take increased control in stimulating the economy with public, rather than foreign private investment.

Some $5.3 billion will be invested in Colombia’s private sector in the hope to generate jobs and reignite the country’s slumping economy.

Of this public investment, $3.2 billion will be put in the improvement of the country’s substandard highway infrastructure, $2.1 in royalties, $1.4 billion in the construction of educational facilities, $554 million in housing for the poor.

An extra $1.3 billion will be used to invest in tertiary roads as agreed in a peace deal with Marxist FARC rebels to stimulate the rural economy where paved roads are virtually non-existent partly because of more than half a decade of war.

The public investments would generate 750,000 jobs and stimulate private investment and ROI, according to Santos.