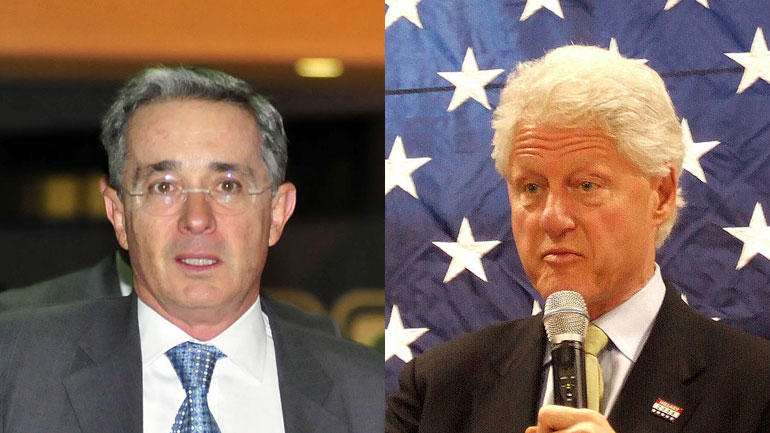 Clinton and the US special envoy for Colombia’s peace negotiations, Bernard Aronson, have urged former President Alvaro Uribe to support the peace process, after relentless opposition in Colombia and stirrings with the US Republicans over the process that began in 2012.

Uribe led a merciless military offensive against the FARC between 2002 and 2010 and unsuccessfully tried to barter peace with the group during his second term between 2006 and 2010.

However, the offensive came at a major human cost as the military killed thousands of civilians and passed them off as guerrillas killed in combat while Uribe was commander in chief.

Today the former president frequently takes to social media to challenge the administration of his successor Juan Manuel Santos, who formalized talks with the guerrillas in 2012.

Uribe has in the past received support from the US Republicans, in particular the conservative presidential candidate Marco Rubio (R-FL). However, despite significant public support, with a minority in Congress Uribe has had little power in the development of negotiations.

In June Uribe traveled to Washington, reportedly to seek the positioning of the US Congress on the matter and garner support in his objections to the process. Following a meeting with the envoy, US Ambassador Kevin Whitaker reported  “The Santos government should listen to serious proposals and criticism of Uribe’s peace process.”

President Santos in July warned against the manipulation of the negotiations, concerned such discussions could cause a rift between the US Republican and Democratic parties.

“Some people have tried to sow discord, divide politics in the United States over Colombia. This can not be allowed under under any circumstance” reported Santos.

Peace talks opponents ‘want to sow discord in US over Colombia’: Santos

In support of the peace talks the Obama administration in February appointed the State Department special envoy to the peace talks, creating a direct line of communication with Washington. At the time of appointment Bernie Aronson reported his “duty” to aid negotiations.

“The parties have made ​​things difficult for the final and now we have to solve these problems ” reported the diplomat.