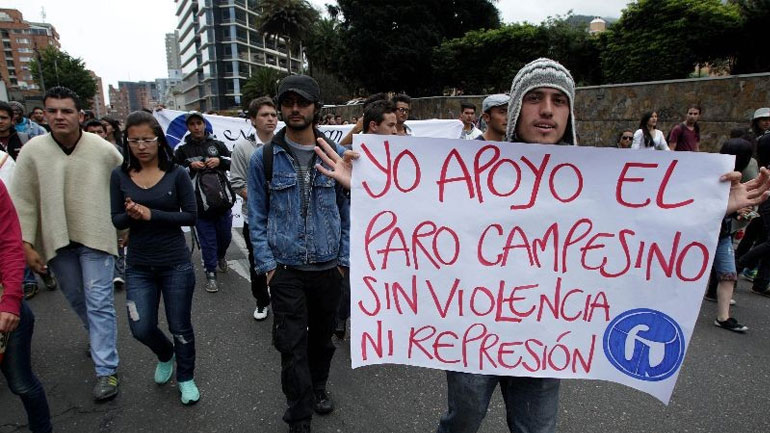 A number of farmers’ right organizations on Sunday called a day of protest for Monday, claiming the government has failed to live up to promises made to end a massive strike in 2013.

The protest is the second major mobilization after a massive strike in 2013 in which numerous agricultural workers, miners and truckers took part.

A coffee worker representative told Spanish news agency EFE that coffee, rice, milk and potato farmers will come together in several towns to protest what they call a governmental failure to live up to promises made in 2013 and a general state abandonment in rural areas that has caused social and violent conflicts for decades.

The protests will be held in the towns of Armenia, Tunja and Bosconia.

Agriculture Minister Aurelio Iragorri said the government will respect and allow the protests, but warned the protesters not to disturb public order or block roads.

Iragorri claimed that the organizations organizing the protests did not represent farmers.

“What is happening is that those few people who promote these marches are into something else, pursuing other interests than the farmers.”

The existence of rural protests were also initially downplayed by the government, most notably President Juan Manuel Santos, who referred to the strike that as a “so-called strike,” spurring major anger among strikers and urban dwellers supporting the farmers..

The 2013 protests additionally caused major violence between farmers and riot police, who were subsequently scolded by the United Nations and human rights organizations for excessive violence used in attempts to quell the protests.

As the strikes began to cause food shortages in major cities like Bogota and Medellin, the government made a number of agreements with the strikers, mainly to undo some of the negative effects caused by international trade pacts like with the United States.

Clauses in these pacts, for example, hurt farmers who no longer were allowed to use their own rice, but were obligated to use certified seeds sold mainly by multinational companies like Monsanto. The clause also prohibited the planting of harvested seeds, forcing farmers to by new loads of certified seeds for every time they sowed.