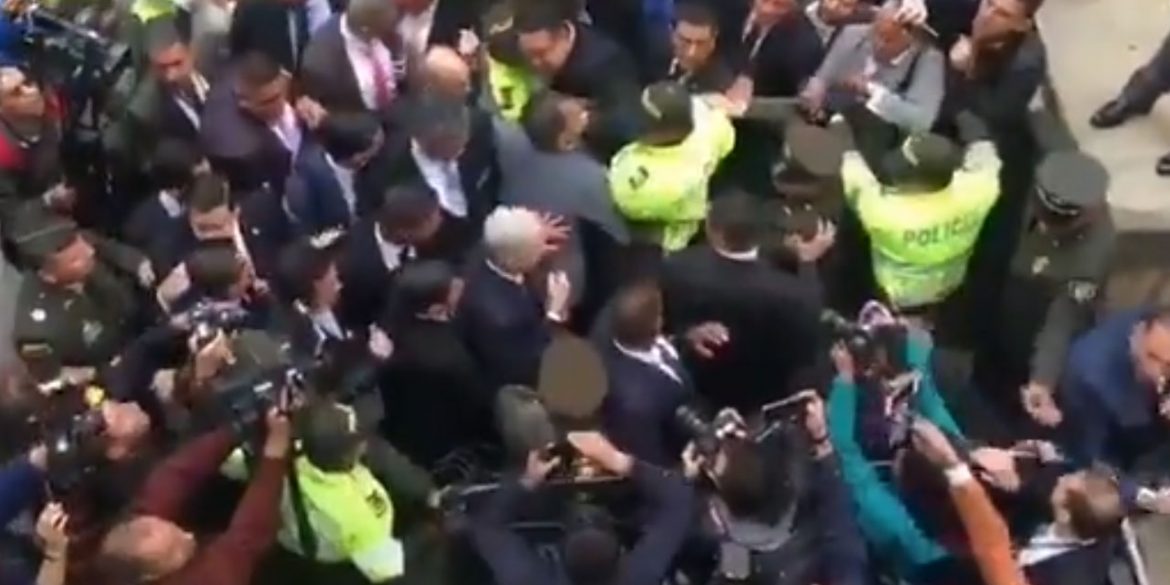 Colombia’s former President Alvaro Uribe was met with chaos on arrival at  Colombia’s Supreme Court where he is expected to defend himself against fraud and bribery charges.

The former president arrived at the Palace of Justice building in Bogota just before 8AM where he was met by both opponents and supporters.

Uribe’s far-right political party, the Democratic Center, had been mobilizing supporters to protest in support of their party leader in the National Park at 11AM.

Opponents of the former president convened a protest ahead of Uribe’s arrival at the central Simon Bolivar Square and shouted “murderer” at Uribe while he was being escorted to the main entrance.

Supporters who joined the crowd chanted his name in support as he entered court with his attorneys.

While the former president shook the hands of some of his supporters, Uribe made no public statements.

Despite the chaos, Uribe was able to enter the Palace of Justice building unharmed and no clashes between supporters and opponents were immediately reported.

After the announcement of Uribe’s party to organize protests in support of their leader spurred security concerns, National Police General General Oscar Atehortua asked magistrate Cesar Augusto Reyes to move the hearing from the building of the Superior Council of the Judiciary to the Palace of Justice.

Because Uribe could be sent to jail over his alleged witness tampering practices, tensions are high in the capital that saw major student protests last week.

The State of Colombia vs Alvaro Uribe | Day 15: the prime suspect

The historic hearing — no former president has ever been called to appear before the Supreme Court on criminal charges –follows more than a month of witness hearings and an investigation that began in February last year.

While the judge could decide to jail Uribe while the trial proceeds, a verdict is not expected for months.