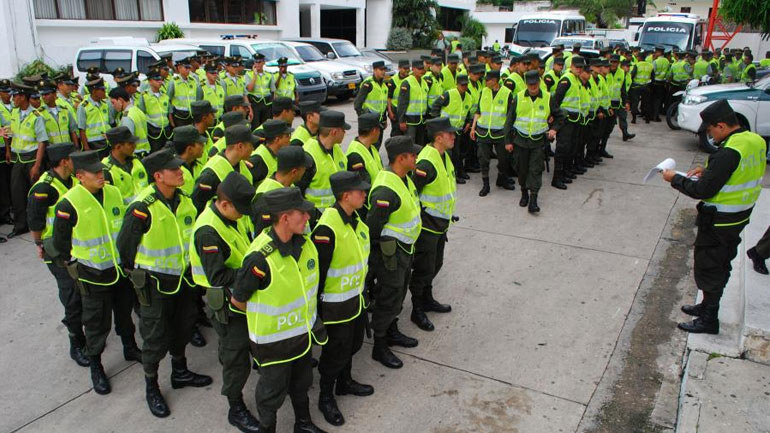 The police commander expressed concern Monday about the police force’s effectiveness at combating murders, vandalism, homelessness and underground parties due to the limitations of legal policies.

In a city council debate, the capital city’s police commander, General Humberto Guatibonza, spoke of how police efforts to arrest delinquents are hindered by weak punishing policies, which in turn affects the safety of citizens.

“Users of the Transmilenio [bus system] are at the mercy of delinquents and beggars, said the commander of the Bogota Police… during a debate in which he practically notified the council of the impotence of the police to defend citizens,” said councilwoman Lucia Bastidas of the centrist Green Party.

Speaking specifically about the well-being of citizens using public transport, Bastidas added that “there are not the legal grounds to allow the proper punishment of those who disturb the tranquility of the people.”

The commander of the Bogota police argued that there are approximately 6,000 men per shift to watch the city and fight approximately 1,500 criminal gangs that operate or move through the streets. On average, in the capital there is one policeman per 1,333 inhabitants which is absurd.”

According to El Espectador newspaper, Bastidas agrees with the fact that police are faced with inconsistent security and punishment measures against the presence of homeless people on buses, informal street workers, theft and abuse. There is also no form of punishment in place to deal with the increasing amount of homeless people using the Transmilenio and intimidating its users.

“In a single route between the south and the north there will be an average of eight to 10 beggars. There are main stops such as Caracas Avenue and the 10th which have become unbearable for the passengers,” said Bastidas adding that street sellers, who according to Guatibonza are “untouchable,” are also a problem as there is no protocol available to remove them from the stations or confiscate their products.

On top of delinquency, there is also the issue of assassinations which according to reports have gone up in 2015 due to micro trafficking and gang warfare. According to Guatibonza, 71 assassins have been captured, which is different however to the Government Secretaries figure of 61.

“This inconsistency shows the confusion and lack of coordination and working together between the police and the Government Secretary, which should have the management of the city under control,” said Bastidas

Underground parties which feature underage drinking occurring in 12 of the cities 20 localities are also proving a cause for concern as locals are not helping police combat the problem.

“The conclusion of the commander of police during the debate is that the police become worn out because they arrest people and a few hours later the thief is returned back to the street where he continues committing crimes due to the lack of a judicial policy that allows the arrest and punishment of delinquents and law breakers. The most serious thing recognized by the general, much to his regret, is that unfortunately there are members of the Police who are linked to criminal gangs, and many of then have been arrested, tried and retired from active service in the police,” finished Bastidas.