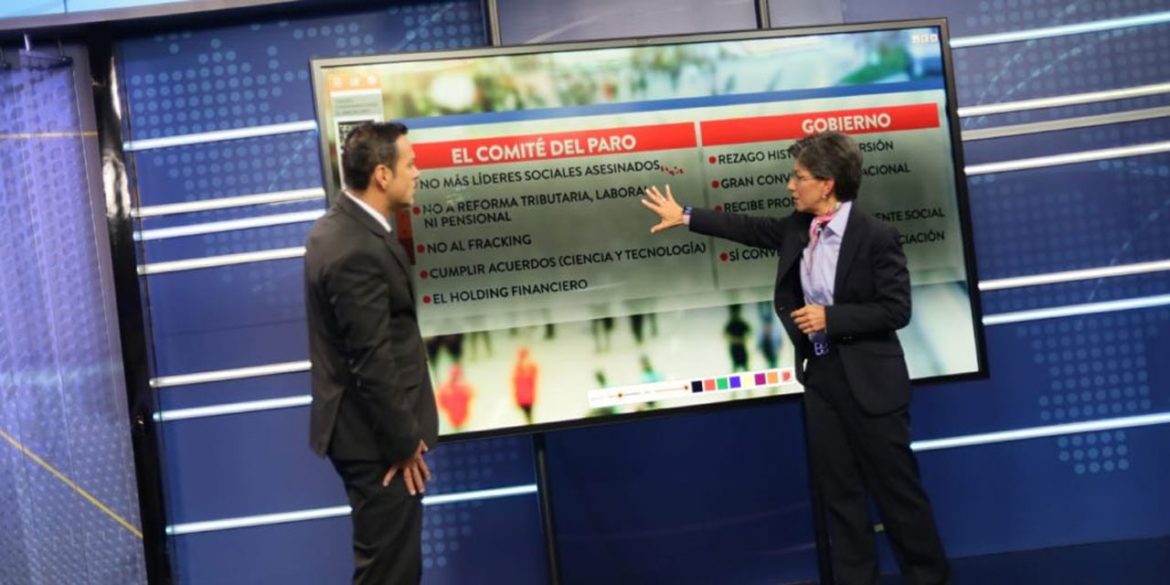 Bogota Mayor Claudia Lopez allegedly downplayed the violence that took place after the resumption of anti-government protests in Colombia’s capital on Tuesday.

Lopez was criticized by both Bogota’s human rights office and civilian organization Defender Libertad as she rushed to paint an overly rosy picture in regards to police brutality and vandalism.

While Lopez reported 86 arrests in her 7PM speech on Tuesday, Castañeda and Defender Libertad said that by sunrise  212 people were arrested before dawn.

According to the NGO, the majority of protesters were unlawfully arrested and some were physically abused.

Several who were taken were denigrated, injured, and beaten on the head and in the face during the detention.

The mayor claimed that the police “courageously fulfilled their value by adapting to human rights protocols and the protocol of the Mayor’s Office,” but this was contradicted by the NGO on Wednesday.

Defender Libertad said that controversial riot police unit ESMAD ignored the mayor’s orders and attacked protesters and human rights defenders “with the main objective to dissolve the protest” disregarding whether it was peaceful or not.

These acts of aggression against human rights defenders and members of the human rights office have been a constant since the beginning of the National Strike on November 21, 2019, a situation that we believe does not correspond to municipal level guidelines, but rather to generalized practices by the public forces that demonstrate systematic violations of the exercise of the right to protest.

According to the municipal human rights chief, 18 civilians and 11 police officers were injured in violence by police, violent demonstrators and infiltrators.

Castañeda said that by sunrise some 48 buses and 19 stations of mass transit system Transmilenio had been vandalized.

This is considerably less than the 102 buses and 68 stations that were attacked on November 21. That day, however, the country’s largest national strike in more than 40 years kicked off the anti-government protests while Tuesday’s protests were considerably smaller.

Bogota’s progressive new mayor admitted the first protest of the year was a “day of learning” and that she had underestimated the number of protests that erupted in the city of 7 million.

According to Pedro Vaca, the president of Press freedom foundation FLIP, Lopez’s protocol that sought to prevent police violence by initially employing civilian mediators “is crashing into the harsh reality of the kind of society we have constructed.”

It is worrying that a mayor who wants with good intentions to moderate the tense social forces, ends up losing leadership among both the protesters and the police.

Lopez admitted in her press conference that she had underestimated the number of gatherings and expressed her frustration about “infiltrators” who were attacking police and protesters alike.

Duque’s far-right Democratic Center party, which received a beating in local elections last year and opposed the protests, tried to capitalize on unrest in both Bogota and Medellin where they lost respectively to Lopez and Daniel Quintero.

Radical supporters immediately began campaigns on Twitter that in November were supported by tens of thousands of fake accounts, this time demanding Lopez’s resignation and the impeachment of Quintero.

“Today a campaign began to undermine the alternative local governments that have just been elected with historic votes. It’s how they are,” Medellin’s mayor said on Twitter.

In an interview with Blu Radio, Lopez blamed “extremists” for the calls for her resignation and said she was “mayor of Bogota, not Twitter.”

By Thursday morning, multiple fake accounts used in the campaigns had been removed by the social media platform.