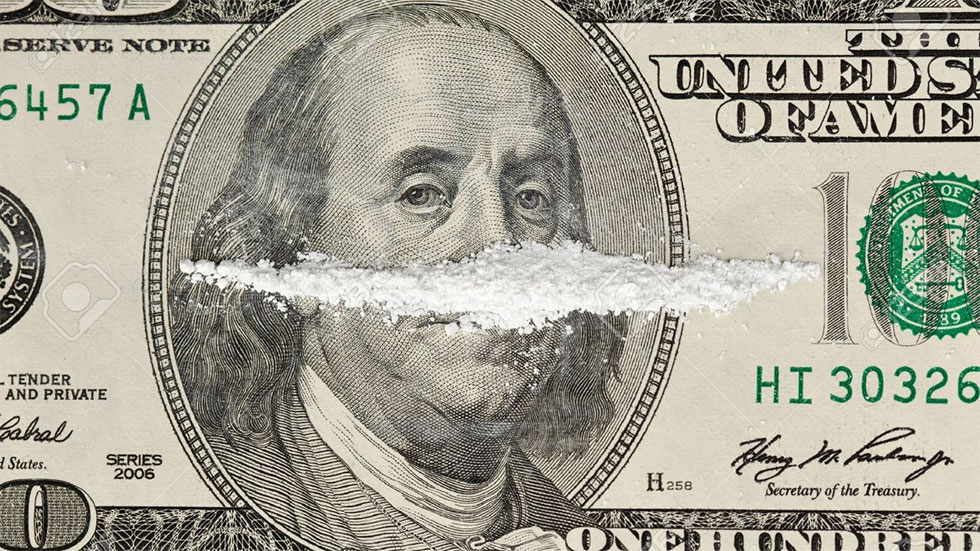 If you have a drug problem, blaming the producer of the ingredients of that drug is clearly a cop-out and no step on the road to recovery. Nevertheless, that’s exactly what the US government insist on doing, with disastrous consequences.

In a recently published article, the Washington Post cited a State Department report in which Colombia’s recent increase in coca cultivation was seen as a cause of the rise in cocaine use in the United States.

I thought this was rather odd, considering Colombia — like entire Latin America — painfully suffers the evident and deadly consequences of an evidently failing foreign intervention to solve what essentially are domestic issues; extraordinary levels of drug abuse and the lack of adequate public services to effectively curb the upward trend.

I’ve never been to the United States, so I couldn’t possibly explain why Americans love drugs so much, but outside the US border it is common knowledge that Americans are the most drugged up people in the world.

I loved when [George] Bush [Sr.] came out and said, “We are losing the war against drugs.” You know what that implies? There’s a war being fought, and the people on drugs are winning it.

It’s not just Colombian cocaine Americans love so much. According to the outdated government statistics, US citizens will pop, smoke, drink and snort pretty much anything at hand, unlike any other country on earth, resulting in exceptional exceptional high levels of drug use and drug-related deaths compared to any other developed countries.

According to the US National Institute on Drug Abuse, which hasn’t surveyed drug use since 2013, 54.5 million Americans used illicit drugs over the past month. Another 22.4 million used legal sedatives. In other words, 23.7% of Americans got high either legally or illegally last month.

From 2000 to 2014, nearly half a million Americans died from drug overdoses, the Center for Disease Control and Prevention said in 2015.

According to the CDC in 2011 already, “more Americans now die from painkillers than from heroin and cocaine combined.”

When it comes to cocaine, Colombia’s famous export product, consumption prevalence among Americans is the highest in the world, according to the United Nations Office on Drugs and Crime (UNODC).

Approximately 3.2% of the population has used cocaine in his or her life, the UNODC said in its latest global survey. That would be more than 10 million Americans and three times the rate in Colombia, where a gram of coke costs $5 if much.

According to the US Department of Health, 1.9 million Americans snorted cocaine or smoked crack in 2015 alone.

How is Colombia production, and not US consumption, the problem?

Disregarding the most basic of economics in regards to supply and demand, the State Department argued that Americans snort more coke because Colombians grow more coca.

Not only is this contrary to basic free market economics and ignoring the fact that drug use across the board has increased dramatically in the North American country, it again deflects from the real cause of the issue: a lot of Americans simply love drugs and will pop, snort or smoke whatever is at hand.

At the same time, the country’s government proves unable or unwilling to provide basic public services like education and universal healthcare, the globally proven key ingredients to reduce drug use, drug addiction and drug-related crime.

Some ignorantly argue that providing public services in return for taxes is “socialism.”

Whatever misconception America’s ignoramuses may hold in regards to the meaning of socialism is and should not be Colombia’s or Latin America’s problem, but it is. And Washington must understand this.

War on Drugs was lost decades ago already

Not counting the narcos, thousands of innocent civilians throughout Latin America are killed each year in criminals’ attempt to provide the illicit drug so eagerly snorted up north. When Colombian President Juan Manuel Santos accepted his Nobel Peace Prize last year, he brazenly and quite accurately claimed that the US-led War on Drugs is “perhaps more harmful than all the wars in the world combined.”

According to locally leading newspaper El Tiempo, the drug trade in Colombia has cost 20 thousand deaths over the past 30 years. That does not count the deaths related to the country’s armed conflict that was financed by the cocaine trade or the deaths of any other country en route to America.

Additionally, the killings caused by the drug trade are not the only damage done. The illegality of the trade and the sheer volume of drug dollars, and I mean American dollars, has corrupted governments from Argentina to Mexico.

So, rather than blaming Colombia’s coca farmers, I suggest the US government admits its utterly retarded War on Drugs was lost ages ago. Instead, for the sake of us all in this hemisphere, DC should start looking for a domestic alternative to effectively reduce its exceptional drug abuse, and rethinks its evidently failing criminal approach to what is clearly a public health issue. It’s killing people.

Lessons from the developed world

Portugal decriminalized all drugs in 2001 and invested in universal healthcare instead. According to The Economist, the European country now has 0.3 drug deaths per hundred thousand inhabitants, six times less than the US, which has the highest number of drug users and the highest rate of drug deaths in the entire hemisphere.

Inadequately regulated prescription drugs kill more Americans than cocaine and heroin combined, the CDC said in 2011 already. US Congress has not planned one session to evaluate its drug policy until the first quarter of this year.

Why do we suffer because you can’t handle drugs?

The entire hemisphere is suffering the consequences of the US government’s failing drug policy, and failing public education and public healthcare system. These last two are what have proven to effectively reduce drug use, drug dependency and crime. The evidence is everywhere, just look at Portugal and the Netherlands for example.

Combined coca cultivation in Colombia, Peru and Bolivia will drop only if and when the US legalizes that drug and offers its citizens the healthcare and education they already pay an absurd amount of taxes and insurance policies for. Any amateur economist knows that as long as there is a demand, supply will come, it’s the essence of free market capitalism. The United States’ lack of public services is common knowledge.

If the US government persists in its harmful policies in regards to drugs, healthcare and education, Colombia and the rest of the world must, for the safety of our own citizens, unilaterally legalize drugs and let the US deal with its own drug addiction.