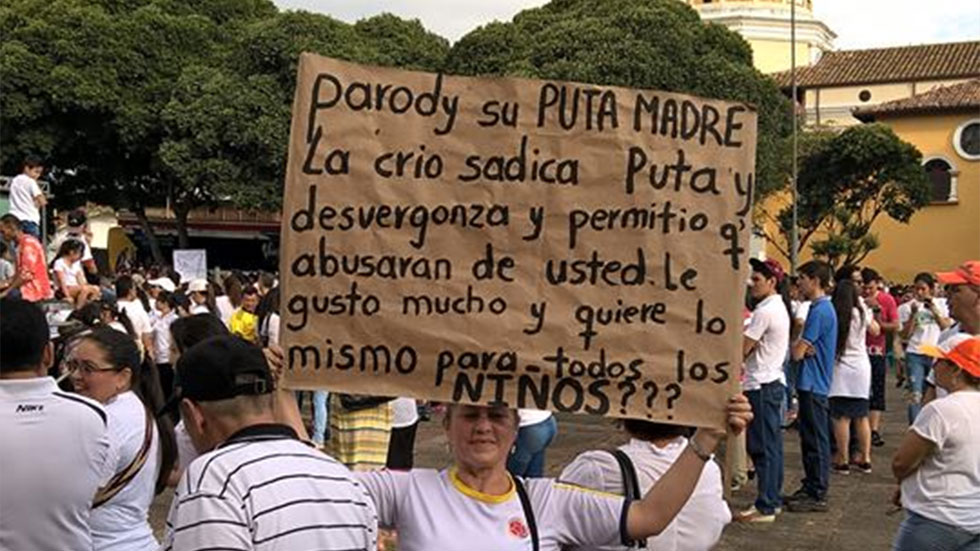 Colombia’s government plans for improved sexual education and plans to include LGBT rights and anti-discriminatory information in educational material spurred a major backlash in the predominantly Christian country.

The main controversy surrounds Minister of Education, Gina Parody, and her participation in an educational manual to be published with the help of the United Nations Population Fund (UNFPA).

The minister, who was asked by the government to update anti-discrimination laws, first came under fire after proposing mixed bathrooms and unisex uniforms in schools.

Parody, who herself is gay, was then accused by Santander Deputy Angela Hernandez of “homosexual colonization” of mainstream culture.

Further insults and accusations were provoked by the content of “School Environments Free of Discrimination.”

The real manual includes information on different gender identities, sexual orientations and how the two concepts are not always interrelated.

The representative for Infancy and Adolescence of the Inspector General’s Office, led by staunch Catholic Alejandro Ordoñez, claimed the guidebook “promotes homosexuality” among student communities.

The IG’s office asked why the opinion of other sectors of the educational community were not included instead of just that of the LGBT community.

Colombian society, heavily influenced by the Catholic Church, has long struggled with the integration of LGBT people into mainstream society.

Sex education remains a taboo in spite of staggering figures of child pregnancy and homophobia in schools that last year led to the suicide of a gay student who said he could no longer stand the verbal abuse.

Although the country has one of the highest rates of teen pregnancies, sex education only became obligatory in schools in the 1990s and was met by the creation of groups such as “Red Families” who urged other parents to denounce the classes.

Efforts to provide free contraception to young people in the past have also been condemned by the Catholic Church who called them “irresponsible” for promoting the idea of sex.

In response to the new plans to improve sexual education which secure the rights of the LGBT community, Colombia’s Catholic Church has urged people to take to the streets to express their opposition.

Thousands of churchgoers took to the streets on Wednesday, loudly protesting against sex education and the normalization of sexual preferences of minorities.

How hard is it to be gay in Colombia?

The country’s Human Rights office said it had received almost the same number of registered complaints from individuals identifying as LGBT in the first four months of this year as they received throughout the entire year of 2015.

The suicide of young LGBT student, Sergio Urrego in 2014 was the main drive behing the anti-discrimination reforms.

Vice-minister of Education, Victor Javier Saavedra cited Urrego’s case in his backing of Gina Parody’s plans and stated “We only want institutions in the country to respect sexual identity and gender of students”.