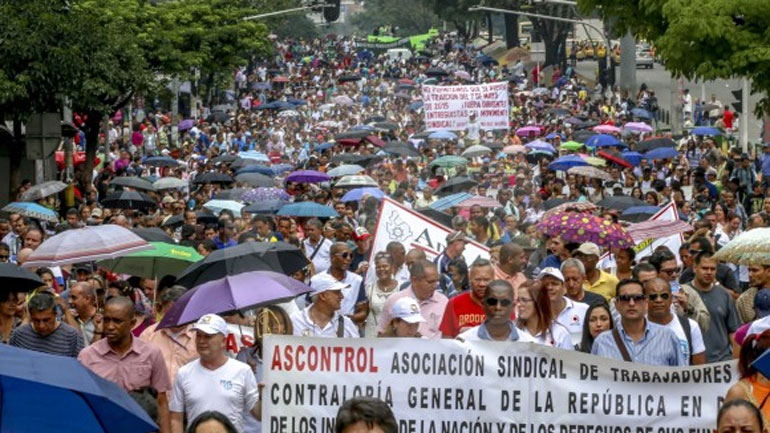 Nationwide protests targeting the Colombian government’s economic and social policies took place on Thursday without unrest, with the exception of Bogota where at least three were injured in clashes.

The turnout of the protest was much less than the 2.5 million calculated in advance by the protest organizers.

The myriad of labor unions, and organizations representing miners, farmers, students and truckers drew tens of thousands in more than a dozen cities across the country.

In larger cities like Bogota, Medellin and Cali, thousands took to the street, while in smaller cities smaller numbers of protesters came out in protest.

In spite of the Bogota protest ending in violence between hooded individual and riot police, the administration of President Juan Manuel Santos called the protests “peaceful.”

The protest organizations demanded to sit down with the government and negotiate changes to the South American country’s economic policies that have come under criticism after a drop in global oil prices spurred numerous spending cuts and reduced spending power for the lower and middle class.

Interior Minister Juan Fernando Cristo announced he would sit down with the protesters.

While Colombians have been united in the disapproval their president, political polarization in the country appears to work in favor of Santos, whose approval rating has dropped well below the 30%.

While Thursday’s march was organized by mainly leftist and community organizations, the conservative opposition under the leadership of former President Alvaro Uribe would not join the protest, but announced its own anti-government march on April 2.

The Uribe-loyalists share most the concerns expressed by the protesters on Thursday, but fiercely oppose ongoing peace talks with FARC rebels. Thursday’s protests were explicitly pro-peace.