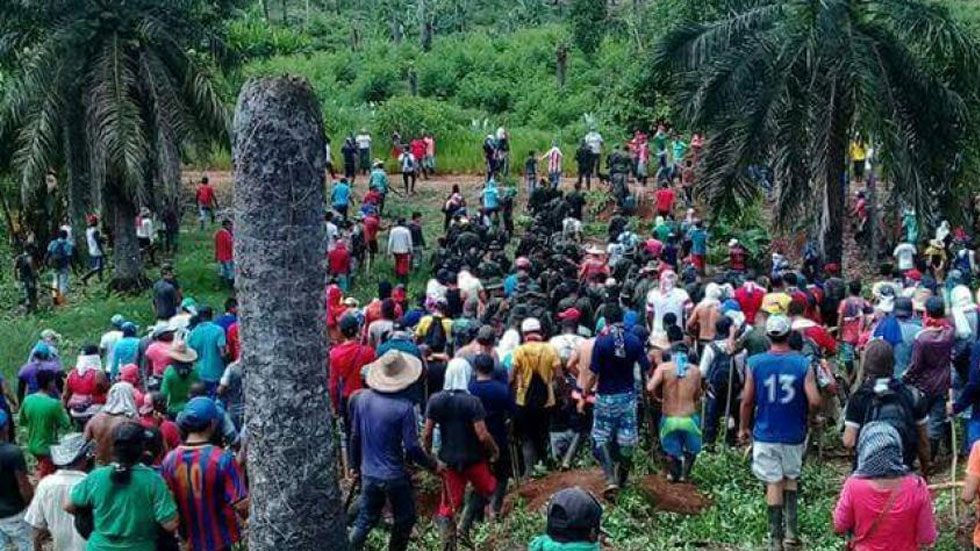 Resistance to Colombia’s efforts to forcibly eradicate coca is causing uprisings across the country and moving into new levels of militancy, as shown by civilians’ detention of 11 policemen in the southwest of the country.

The police were detained by coca farmers in Tumaco on Wednesday afternoon and released Thursday night, reported El Tiempo newspaper.

The Tumaco incident is only the latest in a burgeoning resistance movement that has seen demonstrations by coca growers and their supporters in a number of communities throughout the country’s coca-growing regions.

Colombia’s authorities are struggling with contradictory demands, trying to both please its primary ally in its counter-narcotics efforts, the United States, while trying to maintain peace with rural communities, many of which depend on coca.

Colombia, once again the world’s leading producer of the raw material for cocaine, is under severe pressure from the US to dramatically reduce its coca crop. That message was reaffirmed in a visit to Bogota last month by William Brownfield, the Assistant Secretary of State for International Narcotics and Law Enforcement Affairs.

“The US is very clearly pressing the Santos government to eradicate more,” Adam Isacson, of the Washington Office on Latin America (WOLA), told Colombia Reports. “Even US officials who strongly support the peace process are encouraging Colombia to eradicate more, because the increases in coca growing are undermining support for post-conflict aid in Washington.”

Coca production in Colombia is at record levels in spite of the US’ $10 billion “Plan Colombia” that for 15 years aggressively, but with opposite results sought to curb coca cultivation and drug trafficking.

The opposition to the government is not because the farmers reject the idea of moving away from coca, the main ingredient for cocaine. Rather, they say the government has broken its promises by moving abruptly into an involuntary eradication program carried out by the Army.

What was supposed to happen, according to the Havana accord with the FARC, is that farmers were to have time to voluntarily move into other crops while the government began aggressive investment in rural infrastructure. Also, they were to have protection against narco-traffickers who have assassinated or threatened local leaders who agree to a shift away from coca.

Instead, the government hasn’t begun to deliver on the infrastructure development and has been aggressively pushing involuntary eradication.

For example, in Calamar, in the southeastern state of Guaviare, peasants reported forced eradication by the Armed Forces just days after having signed voluntary substitution agreements, according to conflict monitoring website Verdad Abierta.

In the northwestern Antioquia province, a pilot crop substitution program was suspended amid coca growers’ fears for retaliations by paramilitary groups keen to maintain their illicit business,

“Here in Briceño an agreement was signed March 4 so there would be no eradication, but the army continued to eradicate and burn, said Jimeno Hermosa, president of the Association of Peasants of Briceno-Ascabri.

In Nariño, “we signed agreements for crop substitution but within days the eradicators came,” said Francisco Javier, a farm leader, told the web site. “We want something more structural, so we can create microbusinesses and employment for our people.”

Farmers say have seen nothing from the government to help make a transition to other crops work. “We live on coca because the other products do not work,” Narino farmer Alexandra Maitui told El Pais newspaper. “There are no roads, there are no bridges, there is no way to water,” she said. With coca, “we don’t have to take it to the city. The buyers come here.”

Rather than acknowledging the farmers’ complaints, the government has tried to undermine their protest’s legitimacy.

For example, the head of the National Police Anti-Narcotics division, General Jose Angel Mendoza, claimed Thursday that drug traffickers were paying participants in the Tumaco protests 100,000 pesos to frustrate eradication efforts, according to El Tiempo.