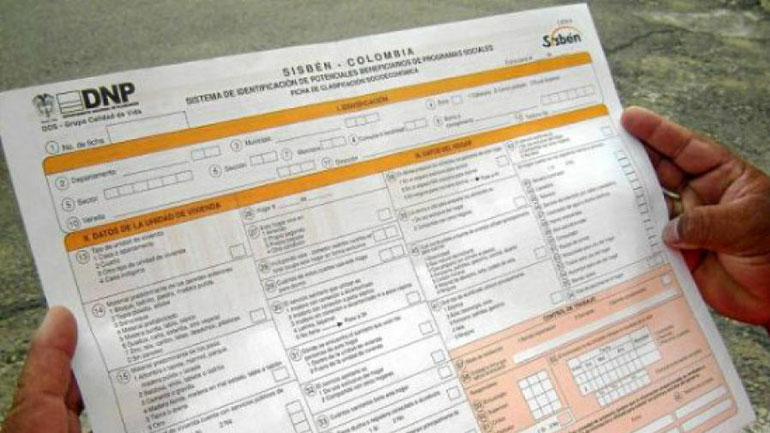 Colombia’s mayors are not updating the registries that connect the poorest populations to government funds — leaking subsidies to rich and dead persons instead of those living in poverty, according to the National Planning Department (DNP).

The database of the SISBEN registry, designed by the DNP, collects information on potential beneficiaries of government aid for 16 social welfare programs in Colombia, but new evaluations have shown the system is being taken advantage of, preventing vulnerable families from receiving care.

As a result, the DNP urged municipal leaders Tuesday to update the SISBEN information as fast as possible, to gather reliable data of all the registries in order to guarantee the poorest Colombians access to social programs on issues such as education, housing, health, child protection and elderly care, among others.

DNP Director Simon Gaviria Muñoz announced the release of a notice to all mayors to guide them in the updating of the databases in their municipalities in the least amount of time possible.

“Today we have more than 34 million Colombians registered en SISBEN, which is 75% of the country’s population. However, there are close to 653,000 registered in the system that need on-the-ground verification to ensure the information is correct. There are, for example, 457,000 reported dead by the National Registry whose families could still be illegally receiving subsidies from the state. That, we have to get rid of,” said Gaviria.

According to a list from the DNP, there are municipalities where local authorities haven’t verified a single case of deceased persons, implicating a high probability that funds are still being sent to individuals no longer living.

Pauna, a municipality in the department of Boyaca, leads with the highest number of records unverified by the mayor’s office — 115 cases as reported by the National Registry. Following behind are Montebello (Antioquia) with 109; Puerto Lleras (Meta) with 99; and Magui (Nariño) with 76.

Gaviria reminded the municipal administrations that they are responsible for carrying out SISBEN surveys and sending the updated information to DNP to be consolidated and to be made available for use in social programs.

“We will publish on our website (www.dnp.gov.co) the list of each one of the municipalities that should clean up their databases as fast as possible. We can’t continue allowing the injustice of stealing assistance opportunities from those living who really need them,” urged the DNP director.

So far the DNP has made at least 12 calls to mayors to verify more than 457,000 cases of persons who are still registered as living, but could be deceased, in the SISBEN databases.

Wealthy individuals can take advantage of the system too, according to the new SISBEN information, by registering inaccurate incomes.

Some individuals with monthly incomes above $1,500, a relatively high salary in Colombia, have registered their salaries at lower numbers, even listed as unemployed or without income in some cases, and may be receiving government benefits originally destined for the impoverished populations.

83,000 cases of wealthy or well-employed individuals exploiting the system are being investigated. So far around 11,300 instances have been reported in the last six months.

Throughout the country there are reportedly 2,500 people who earn nearly $2,500 USD and continue to receive government checks, exposing a dire need to update the information currently in the databases.

In La Jagua de Ibirico, for example, a “Mr. Lopez” entered the SISBEN system in 2009, reported having no income and as a result, has a low SISBEN score of 2.4. During verification processes, however, it was discovered that he has been receiving an income above $2,500 USD per month for at least the last six months.

The DNP sends back to each mayor the database of his or her municipality every month, marking which cases present inconsistencies once they are filtered through the system.

Concerning the proliferation of the issues, the DNP stated that the responsibility remains in the hands of the municipalities and the mayor’s offices of each region to verify the information in their own territories. The systematic validation of citizens at the municipal level must ensure that the most vulnerable in their districts qualify for state aid, and that funds don’t end up in illegally registered pockets.

In response, the president of the Federation of Municipalities, Gilberto Toro, defended the municipalities on the issue of a corrupt SISBEN system.

“The task is not entirely for the municipalities. If an entity has established inconsistencies, it is precisely because of those centralizing from above, not the municipalities underneath who only have fragments of information. Article 21 of Law 715 establishes that every three years the database be updated. This is the duty of municipalities, according to the DPN itself,” Toro stated in an interview with El Tiempo.

Additionally, DPN has recognized its own role as the overseer of SISBEN data, sharing part of the responsibility of the misreported information.

“The purpose of the government is to ensure SISBEN is a reference tool to grant aid to the various types of impoverished populations in the country, and in this way, to achieve greater social equity,” stated Gaviria.

The “living” dead: With a cut in September 2015, some 457,000 people were reported as dead in the National Registry, but are still included in the system. 67% of these cases have been reported in the past year.

Renting for a day: When SISBen carries out its surveys, certain individuals temporarily rent out low-end housing in order to qualify for aid. Changes in types of housing totaled 80,735 in September. 56% of these cases have been reported to DNP in the past year.

More than 32,000 people have changed information about their sewage, water, age, among other factors. 93% of these cases have been reported in eight months.

According to Gaviria, the irregularities consolidate the need for a bottom-line reform in the management of SISBEN, which would be presented in the remainder of this year or in the first trimester of 2016.

“We can’t continue the next eight months asking mayors to please make corresponding revisions. Many of the cases are flagrant and of long duration, and they continue in impunity,” the DNP director complained.

Among other revisions, the reform would allow for more crosschecking between databases and the implementation of measures in real time, which include the temporary suspension of benefits as a form of punishment in blatantly illegal cases. As of now these efficiency mechanisms are not possible in the existing system.

DNP additionally hopes to use family incomes as a classification tool, rather than conditions of the living environment, which are known as “sensitive variables” and are vulnerable to manipulation.

Both the Director of Planning and the Ombudsman announced that cases with artificially inflated information will be brought to a corruption commission, in which the Attorney General will be involved, in order to see whether the cases warrant sanctions.

“(The corruption) is unacceptable and I believe there should be both disciplinary and criminal tax consequences for those who are taking someone else’s opportunity to get out of poverty,” Gaviria stated.

Otalora stated that even ordinary citizens involved who are accused of falsifying documents, or have benefited from free housing grants, could incur fraud in a trial.

“These are state funds that are being thrown away and are enriching people…On issues like these the control bodies have to send an exemplary message…The punishment for those exploiting the system is the great challenge of the inspection bodies,” the Ombudsman said.