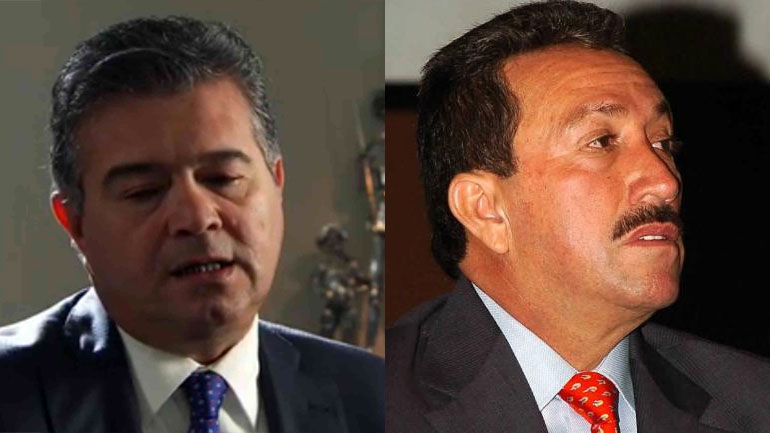 A tale of two Colombian colonels in a parapolitical saga

An Army colonel who was key witness in a trial that sent a former Police colonel-turned-governor to prison is fearing for his life, while the convicted former official has been welcomed home as a hero following an early release.

Former Colonel Julio Cesar Prieto has broken his silence in reaction to the early release and consequent victorious reception received by former Governor Hugo Aguilar in the central province of Santander. He in contrast revealed the constant terror that he and his family now live in due to his testimonial in 2007 that was key to Aguilar’s final conviction.

The former governor was a major player in Colombia’s parapolitics scandals, in which some 70 congressmen and governors were convicted for their connections with paramilitary units who used death squads and intimidation to coerce voters to get their allies elected into office.

Official versions reported that it was Aguilar that delivered the final shot ending the life of Colombia’s then-public enemy number one.

Aguilar was famously pictured on the rooftop of Escobar’s house proudly positioned alongside his victim. This gained him widespread recognition, and allegedly earned him a considerable reward and promotion to the level of lieutenant colonel.

Various alternative versions of this story exist, citing the involvement of vigilante paramilitary group “Los Pepes,” with some stating the founders of this faction were in fact responsible for the killing.

In 1994, Aguilar was accused of having worked with the Pepes who would later take over Escobar’s “Oficina de Envigado” crime syndicate and form paramilitary umbrella organization AUC.

In 2000 Aguilar moved into the political world where his continued relations with the AUC and enabled him to gain the role of Governor of Santander in 2003. He was the sixth governor elected that year condemned for the practice of parapolitics.

As Governor of Santander Aguilar gained popularity with then President Alvaro Uribe. In 2006, despite having retired from the police, Uribe awarded him an honorary promotion to the level of Colonel.

Aguilar was arrested in July 2011 under charges of “aggravated conspiracy”, due to his involvement with the AUC. After preliminary investigations he was banned for 20 years from holding a public office position.

After a number of witnesses revoked their testimonies, his final sentencing in August 2013 rested on the evidence and testimonial of Colonel Julio Cesar Prieto and the paramilitary leader Salvatore Mancuso.

Prieto delivered two recordings as evidence showing Aguilar to be working with the Central Bolivar Bloc of the AUC. It was discovered he had gained his political position with help from these criminals and had in return collaborated with the illegal organization.

Aguilar was sentenced to nine years in prison and ordered to pay a $3.2 million fine.

Cop-turned-governor who hunted down Pablo Escobar sentenced to prison

In May of 2015 Aguilar was given early probation after serving 4.5 months in prison. He returned to a victorious celebration in his home of Bucaramanga, where his son Richard Aguilar has succeeded him in the role of Governor. The streets were closed as three thousand cheered, sang and released balloons in tribute to him.  He was blessed with holy water as crowds cheered “Long live Aguilar”, and speakers referred to him as “family.”

Colonol Julio Cesar Prieto served 31 years in the National Army. During this time he fought guerrillas and paramilitary, confronting the FARC, ELN and M-19.

He led the battalion of the Luciano D’elhuyer in Santander between 2003 and 2005, he was publicly acknowledged by former President Uribe as an example in the country’s fight against paramilitary groups.

In 2007 the now former Colonol Prieto brought evidence to the Supreme Court and testified against a number of politicians with paramilitary ties who had gained their positions through violence and threats to voters. This was the first time in history that an active army colonel had unmasked politicians as a part of one of the largest scandals across the country.

At the time he received threats to his career from Aguilar’s Chief of Security, Freddy Gomez Cadavid. He allegedly was offered by Aguilar’s lawyer $187,000 to withdraw his incriminating accusations against the former governor. During the trial, Prieto reported that neo-paramilitary groups tried to intimidate him through the murder of peasants in Santander as well as death threats to his own life.

“A captain and a sergeant of the battalion that I commanded, were negotiating my death,” Prieto claimed.

The official, who was awaiting promotion to the level of general, in response was forced to retire from the Army in April and has since continued to fear for his life. He has additionally been accused of having political motivations, causing forced disappearances, links to drugs trafficking and of paying demobilized former paramilitary members to accuse Aguilar.

The retired colonel has petitioned nine times requesting protection for himself and his family. The prosecution have in response recommended he change his identity, offering him rights to a witness protection program to relocate with his family.

In a grave contrast this week Aguilar who lives with constant police security met with former President Alvaro Uribe who reported “a good dialogue.” Uribe himself has also been accused of ties with paramilitary groups.