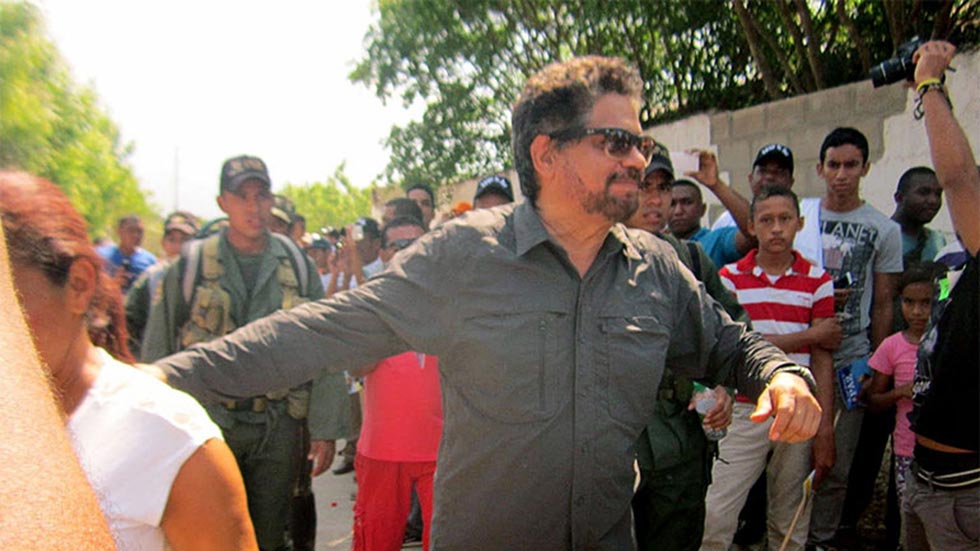 A tempest in a teacup at Colombia’s peace talks

Colombia’s public opinion has suggested the exit of government officials over a recent FARC visit to a town in northern Colombia. But what was so serious about what happened in Conejo? And why does it affect the public perception of the peace talks so much?

After photos began circulating on social media, and a video was broadcast of FARC rebel leaders’ visit to the hamlet of Conejo, in Fonseca, a municipality in the La Guajira province, a debate emerged over what’s been called the FARC’s “socialization strategy” ahead of a peace deal.

Basically, there have been three types of criticism.

From one side, it’s been claimed that the agreed socialization consisted of visits to camps and not of meetings with the civilian population. Therefore these events, or any platform, are prohibited.

Secondly, questions arose over whether the guerrillas had to be armed in the village. Some have said that this was a type of “armed politics.” As such, until a peace deal is signed the guerrilla’s are not allowed any political activity.

Lastly, there have been questions about whether social organizations had lent their name to organize the stage at the social event with which it got the permission of the city hall to organize the event.

After the photos became public, even the resignation of the Defense Minister was suggested and some political sectors have said the FARC’s action shows the governmental inability to control Colombia’s guerrilla groups.

It has also been suggested President Juan Manuel Santos is unable to manage security issues.

But, what was so grave about what happened in Conejo? And why does it affect the public perception of the peace talks?

What is certain is that this is not the first socialization event the FARC has done. There was one in the central Meta province, another in the northeastern Arauca, one more in the southern Putumayo and another in Caqueta, also in the south.

So, the criticism about the FARC organizing one event with civilians and not just guerrillas, which the protocols apparently prohibit, isn’t necessarily serious, it’s not desirable however.

The truth is that this socialization of the FARC’s social base is necessary. In the cities, for example, the Colombian popular perception is that the FARC will not comply with the agreements, that they will not really lay down their weapons, that in general one should expect betrayal of the peace accords.

These fears are caused by the lack of public education on behalf of the government of President Juan Manuel Santos.

However, this same fear and skepticism are alive within the social base of the guerrillas. On their side, they take into account that the government will not comply and they will be massacred the same way as the Union Patriotica party in the 1980s and 1990s, and that there will be no rural development.

This social base of the FARC does not only consist of guerrillas, but their fathers, mothers, brothers… Basically, a 50-year-old guerrilla group generally has a social base. A socialization targeting these people is fundamental.

What is also true is that a community like that of Conejo does not only consist of the guerrillas’ social base. Communities like this have also suffered a lot because of the FARC; they have lived their armed actions and endured their extortion.

In regards to the questions raised about the FARC that the FARC members were armed in the Conejo hamlet, although it is a disgusting and hateful image and brings to mind the old practice of armed politics, it must be said that it could not have happened any other way.

Considering that there is no ceasefire and we are in an armed conflict, it continues to be difficult to ask the guerrillas to attend these meetings unarmed. Two guerrillas who were realizing socialization activities were bombed and killed. It was the bombing in the town of Guapi, Cauca, that killed negotiator Jairo Martinez. So distrust is great.

It is evident that seeing them armed and on a public square has a major negative impact on the Colombian population, but in practice it is difficult to do this any other way.

What has become clear after Conejo is that the protocols weren’t sufficiently clear in regards to these socialization efforts and that indeed the FARC should’ve been more discrete at this stage.

However, to solve the impasse we should appeal to Norway and Cuba, as guarantor countries, and the government should not take the decision to suspend the socialization efforts.

Three guerrilla blocks are yet to know the deal, and the decision of the government to suspend socialization efforts does nothing but delay the signing of a peace deal with another three weeks. You could even say that the government should stop governing over Twitter and being creating protocols with this crisis in mind.

Moreover, to see these guerrilla commanders realizing this type of meetings of socialization should confirm we are getting closer to the signing of peace deals. To a certain extend we can be reassured that, after thee years, we are close. Nevertheless, the effect was opposite but in the end, a tempest in a teacup.