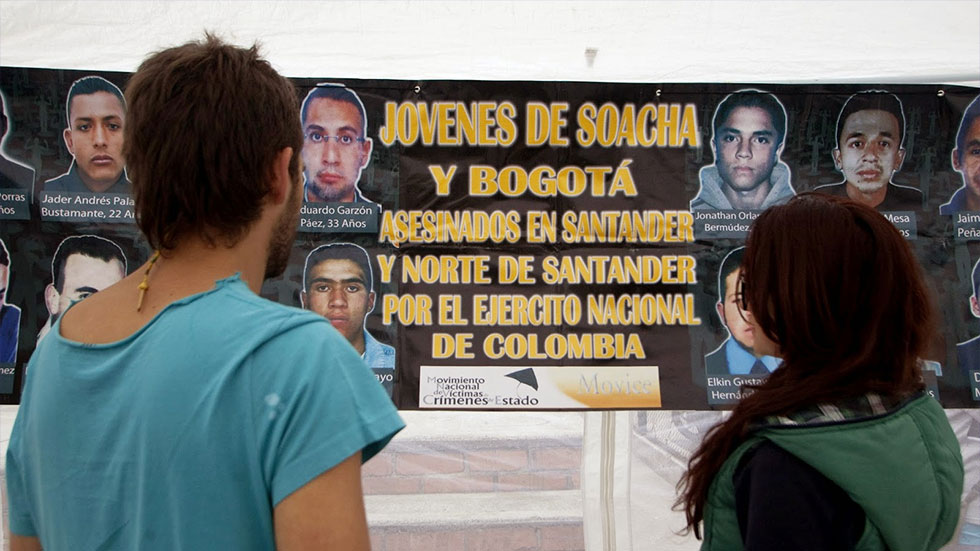 Twenty-one soldiers were found guilty on Thursday of the kidnapping and murdering of five boys and men from Soacha, central Colombia. The case spurred investigations that uncovered thousands of executions of civilians carried out by the armed forces.

A Cundinamarca judge convicted the National Army colonel and 20 soldiers for their responsibility in the crimes of forced disappearance, aggravated conspiracy, fraud, aggravated homicide, and arms trafficking.

The convictions apply to five civilians including one minor who were recruited with false promises of jobs in Soacha and then taken to Ocaña, a municipality in the Norte de Santander province.

Once in Ocaña, the victims were stripped of their identification and executed. The victims were put on camouflage uniforms and placed with weapons in their hands to make the victims of the cold-blooded executions look like guerrillas.

The soldiers than registered them as unidentified guerrillas killed in combat.

Prosecution officials later discovered that the victims had been reported missing in Soacha and began investigations linking other cases of disappearance with reported combat kills.

Former president Alvaro Uribe is in court over the same case, but on slander charges, after he was sued by the victims’ mothers for claiming the victims were criminals.

“He marks our sons as thugs while he never knew them,” Marila Ubilerma Sanabria, whose 16-year-old son was killed, told Caracol News. “They were killed by the state … By people who supposedly protect us, but instead are killing us.”

While governmental and non-governmental organizations had been denouncing the practice for years, Uribe denied the armed forces were routinely executing civilians until the evidence in the Soacha case forced him to take action and purge the military.

The victims’ mothers have received death threats over their attempts to seek justice.

The false positives scandal landed has left hundreds of soldiers in prison already and is considered one of the most heinous of war crimes committed by the state during the country’s 52-year-long armed conflict.

In a June 2015 report, the Prosecutor General’s Office said it had found that the armed forces and civilian collaborators had killed 4,475 civilians since 1986.

The same office said that 5,137 officials were implicated in the extrajudicial killings.