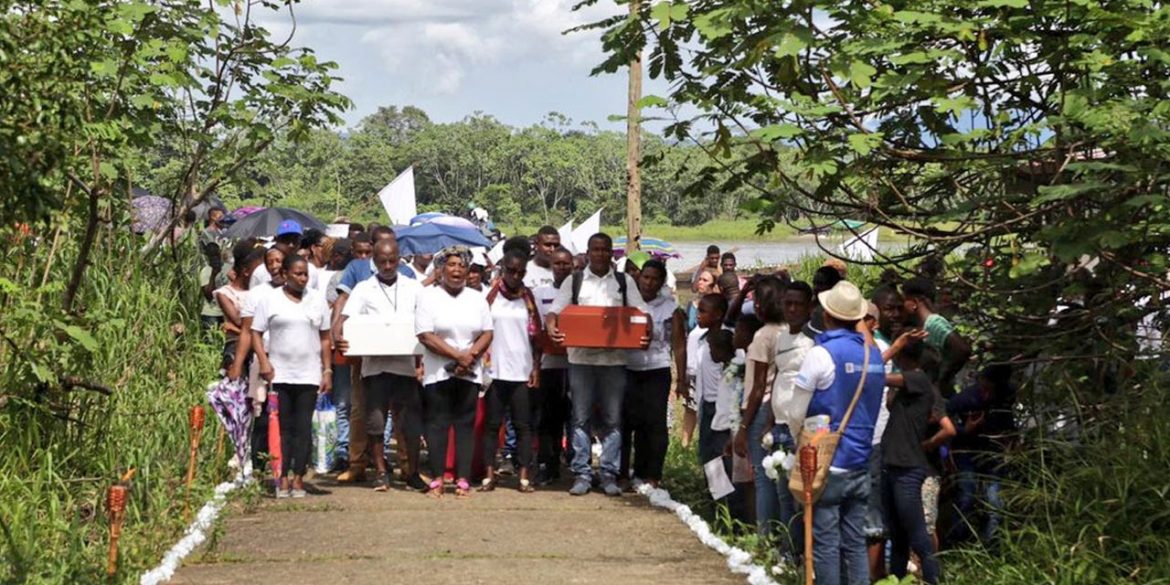 The inhabitants of Bojaya, a town in northwest Colombia, on Monday received 78 remains of victims who were killed by a FARC bomb in 2002.

Seventeen and a half years after the massacre, the National Victims Unit transported the remains from the Medical Examiner’s Office in Bogota to the town in the devastated Choco province.

The community received 99 coffins in which 72 contained the identified remains of victims, six contained unidentified remains and the remaining 11 symbolically represented the children who died in one of the worst massacres of Colombia’s armed conflict.

The coffins were transported from the nearby town of Vigia del Fuerte in ships adorned with flowers and accompanied by the Christ statue that was mutilated when a FARC mortar struck the local church where locals were hiding from combat between the guerrillas and paramilitaries of the now-defunct AUC.

The community will spend the coming week  carrying out their traditional funeral rites and will bury their dead on Monday next week.

While violence continues to ravage the region, the final return of those who died in the 2002 massacre provides at least some closure for the community.

I think the feeling today for the people of Bojaya is bittersweet because we have nothing to celebrate, this is a moment of sadness, it’s a moment of silence and pain; again we must deal with the pain that has been among us for these 17 years. On the other hand, I think it means hope, it is a light for the people of Bojaya to begin the mourning we have been waiting for for a long time. We are going to have the opportunity to say goodbye to our loved ones as we are traditionally taught to do.

The community has fought with both the FARC and state institutions to be able to carry out their ancestral funeral rites.

Immediately after the massacre, the local FARC guerrillas forced the locals to bury the victims against their traditions. The authorities wouldn’t exhume the mass graves to identify the remains until 2017 and allow the community to carry out their rites until 2017.