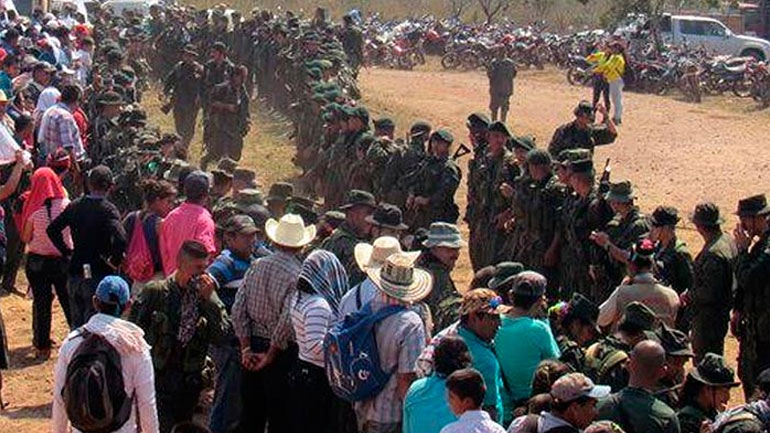 Colombia’s government and FARC guerrillas vowed to tighten up protocol after a surprise visit of rebel negotiators and hundreds of armed guerrillas to a small town upset public opinion.

Speaking to news media in the town of Armenia on Thursday, Santos said government and guerrilla delegates will meet this weekend to specify the rules of visits of FARC negotiators to guerrilla forces.

The FARC’s military commanders have been informing their troops ahead of a pending peace agreement, which will include the demobilization of fighters.

“Part of those discussions have to do with the change and the rules for pedagogy that the guerrillas want to do with their people, so that never happens again what we saw in Conejo,” the northern Colombian village where the FARC surprisingly turned up.

“What I hope is that we can also have additional negotiations on the issues that still lacks momentum,” said the Head of State in his statement.

This weekend’s phase of talks comes in the wake of last week’s controversy with the leak of photos and video coverage capturing four of the FARC’s  senior negotiators surrounded by armed guerrillas conversing with locals in Conejo, La Guajira.

This sparked outrage amongst the public, the conservative opposition and the government.

The image of top FARC commanders parading through towns with hundreds of guerrillas had not been seen since the FARC’s military heighday in the 1990s.

The protocol itself is confidential, but was established to regulate the FARC leaders’ visits to their troops.

Opinion: Tempest in a teacup at Colombia’s peace talks

The negotiators from the left-wing rebel group returned to Havana on Thursday to meet with their government counterparts.

“With the participation of foreign ministers of Cuba and Norway, an agreement has been reached to overcome recent difficulties and normalize talks in Havana”, said a joint communique issued by hist nations Norway and Cuba.

“We will work to adjust the protocols of these visits to ensure this is not repeated and ensure that the FARC can do their pedagogical task,” the chief negotiator of the government, Humberto de la Calle, said.

The government and the FARC have been negotiating an end to 51 years of violence since November 2012, but are still fiercely opposed about a number of issues.

However, with agreements on far-reaching reforms and the guerrillas’ inclusion to politics concluded, the peace talks seem to be in their final phase.

In the event of a peace deal, the country will undergo a peace process with the support of allies like the United States and the European Union.

While talks with the FARC have clearly advanced, the smaller ELN rebel group is not engaged in formal peace talks.