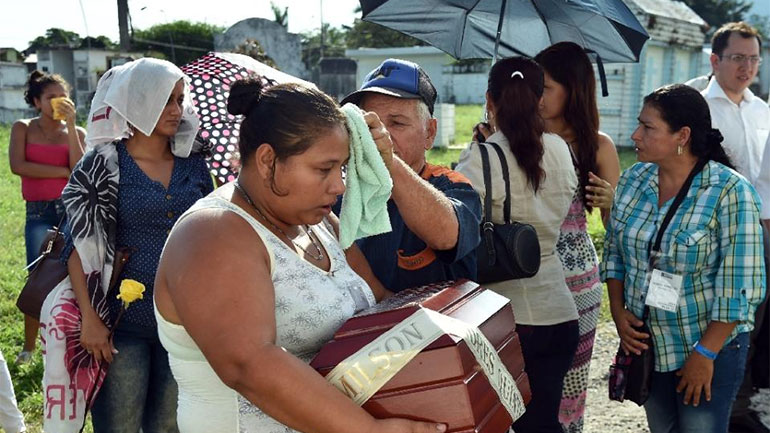 Remains of 29 of Colombia ‘disappeared’ returned to families

The remains of 29 people who disappeared during the half-century conflict in Colombia were handed over to their families Thursday under a deal between the FARC rebels and the government.

The small brown coffins were presented to relatives in a ceremony in the central town of Villavicencio, a traditional stronghold of the Revolutionary Armed Forces of Colombia (FARC).

The remains included the victims of both rebel and army atrocities.

They were identified by forensic scientists and exhumed from common burial plots at several cemetaries in the area.

“It’s hard to finally find him under these conditions,” said 60-year-old farmer Jose Manuel Calderon, who had spent more than a decade searching for his son after he was abducted and forced to join the FARC at age 11.

Other victims included so-called “false positives” — civilians murdered by the army and reported as guerrillas killed in combat in order to earn promotions for those involved.

“They better not drag out the old story that our husbands were guerrillas or paramilitaries. My husband was a public bus driver,” said 60-year-old Dora Gonzalez, who received her husband’s remains nine years after he was detained by the army and executed with a bullet to the head.

The number of missing persons in the Colombian conflict ranges from 20,000 to 100,000, according to different estimates from the government and rights groups.

In the past five years, 2,292 bodies have been found in the region around Villavicencio, of which 830 have been identified and 77 handed over to their families, according to a local victims’ group.

The Colombian conflict has killed more than 220,000 people and uprooted six million.

The agreement on returning the remains of the missing was finalized in October in Cuba, where the government and FARC have been holding peace talks for the past three years.

It is part of a broader deal on paying reparations and providing justice for victims of the conflict that was signed Tuesday — one of the final hurdles in the peace process.

The government and the Marxist guerrillas have both vowed to reach a final peace deal by the end of March.