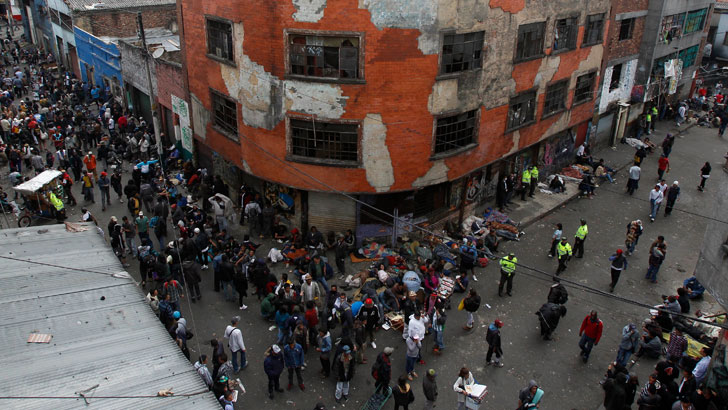 Authorities in Bogota arrested 14 policemen on drug dealing charges. According to the the prosecution, the officers and patrolmen offered protection to drug dealers in Colombia’s capital’s most notorious drug district.

The latest arrest wave in an area known as “El Bronx,” named after the district in New York City, led to a total 31 arrests.

Among the detainees are one lieutenant, four non-commissioned officers and nine patrolmen.

The policemen and civilians with drug trafficking, the financing of criminal organizations, drug dealing and criminal neglect.

Bogota’s prosecution office did not rule out more cops would be arrested in the coming days as the investigation is still ongoing.

One of the curious details is that the of the policemen, patrolman Luis Fernando Sosa, had already been convicted for collaborating with criminals in 2010 and sent to prison. However, the cop was absolved of charges during his appeal and reinstated.

El Bronx, located at a stones throw from Colombia’s congress and the presidential palace, has been the main drug dealing area in Bogota for years. Authorities have carried out raids on numerous occasions but without effect.