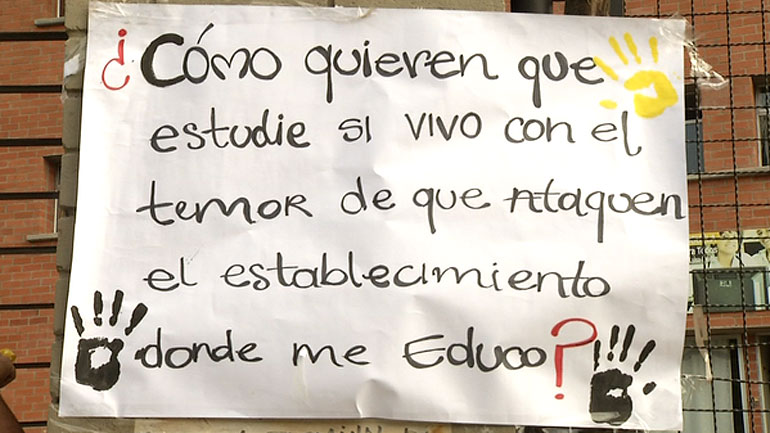 Thirteen teachers have been forced to leave their Medellin teaching jobs and in some cases flee the city in the first ten days of August alone after receiving death threats.

The last victim is a high school teacher in the western 8th District of the city who reportedly was approached by two men on motorbikes and given 12 hours to abandon the city or be killed.

Some 1,500 children have been unable to attend school in the nearby Caicedo neighborhood since last week after ongoing death threats targeting eight teachers forced the director to close the school doors. Two security guards at the school subsequently quit their jobs after also receiving death threats.

Parents and children on Monday marched through the neighborhood carrying signs in protest of the threats that have left their children temporarily without education.

According to newspaper El Tiempo, local street gangs could be behind the threats in Caicedo, located in historically one of the most disputed districts of Medellin because of its vicinity to drug and arms trafficking routes.

Also in the southwest of the municipality, in a rural community called San Antonio de Prado, one teacher and two education coordinators were forced to abandon their work after receiving death threats.

In the last case, reported newspaper El Espectador, disgruntled students could be behind the threats.

In some cases, teachers are targets for criminal groups or rebel groups because of their efforts to keep children in school, sometimes actively preventing their pupils from being recruited by gangs, drug trafficking organizations or rebel groups.

According to a Ombudsman report from 2013, more than a thousand teachers were threatened across Colombia. Ombudsman Jorge Armando Otalora said that the true number of threatened teachers is likely higher.

According to Otalora, the threats in urban centers tends to come from parents, pupils or gangs while in rural communities guerrilla and neo-paramilitary groups are the main offenders.