Why I couldn’t possibly vote for Zuluaga

Two family members of mine were assassinated in a tucked away town called San Carlos, Antioquia. Paramilitary groups that were linked with presidential candidate Oscar Ivan Zuluaga‘s patron, Alvaro Uribe, killed my cousin and uncle in some of the most merciless ways possible.

My uncle, Mariano Bedoya, was shot six times in the back and my cousin, Victor Velasquez, was beheaded and thrown into the San Carlos reservoir by the paramilitaries.

According to ‘Verdad Abierta,’ the town of San Carlos suffered the third highest number of registered massacres in Antioquia behind Medellin and Turbo (both of which are cities) and the sixth highest number in all of Colombia.

The National Historic Commission for Memory, Reparation, and Reconciliation wrote over 400 pages on San Carlos alone stating that, “The recent history of San Carlos condenses the horrors of the Colombian conflict. All the armed actors with all their strategies of war were present in this town of Eastern Antioquia.”

Antioquia is one of the states where the most violence has taken place in the over 50 year long civil war. Antioquia has experienced over four times as many massacres than the runner up state. Uribe was governor of Antioquia during the spike in violence in 1996, and president during one of bloodiest times of the conflict in 2002.

Alvaro Uribe, as governor, added fuel to the fire by throwing over 8,000 soldiers and police into San Carlos, whose abuses and corruption in the region are well documented. The army and police often collaborated with the paramilitaries and instead of helping quell the violence helped the biggest victimizers murder, rape, and displace the citizens of San Carlos.

My father, along with my 10 aunts and uncles grew up in the small town also known as the ‘land of rivers.’ A region of unrivaled beauty and pristine waters perfect for bathing in the middle of the Andean mountains. 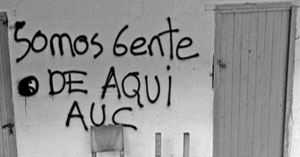 Last year was the first time I was able to visit my father’s childhood home. The eeriness of driving into the town through one of its two access roads and seeing house after house abandoned was quickly replaced by the commotion of the bustling town plaza and the tranquility of the countryside.

The same day I arrived, I went straight to one of the town’s many rivers. There are few sensations better than throwing yourself into such pristine waters under the powerful tropical sun surrounded by jungle.

San Carlos’s richness in the most sacred of natural resources attracted the government in the 1970s and 1980s. During this period the state decided to impose the construction of three reservoirs for “development” of the region.

The violence in San Carlos started with the arrival of the state and the interest in building dams. What was a small town to do against the unforgiving and unstoppable train of my country’s “development”?

A San Carlos resident’s said, “[the state] offered us an amount of money, and my father said he wouldn’t sell for that. The state representative responded ‘it would be flooded anyway if you do not take the money’.” The community was given no choice but to cede the land to a state that historically has had little legitimacy.

Unlike the neighboring two reservoirs that were being negotiated communally, the state went into San Carlos and negotiated individually with land owners. Everyone was offered a different price and resettlement was not discussed. This tore the community apart because as more and more people sold, leverage was taken from them as a group leaving individual resistants with little options. The reservoir in San Carlos required the purchase of 638 properties and displaced 2,705 people. 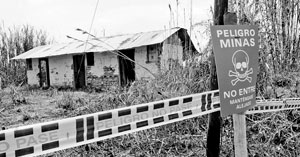 Needless to say, the dams generated controversy and popular resistance within the municipality. The resistance to the imposed government development projects attracted the armed guerrillas of the FARC who hoped to take advantage of the popular unrest. Guerrilla groups attacked military brigades operating in the region, attempted over 5,000 times to sabotage infrastructure and the electric grid, killed 79 civilians, kidnapped 50, and was partly responsible for 76 anti-personnel mine victims, according to the National Historic Commission.

My uncle, Mariano Bedoya, who was killed by the paramilitaries was part of a civic movement called ‘Moviemiento de Accion San Carlitana’ (MAS) which later turned into “Union Civica Municipal,” (UCM) a movement that spread throughout eastern Antioquia.

Mariano was a progressive in the truest sense of the word. He challenged the conservative status quo of San Carlos in the 1980s and was very popular. Mariano opened up a bar that played salsa and was a huge hit with the townspeople.

MAS represented the public’s interests and necessities. The group was meant to guarantee the transparency in the management of public resources and the negotiations with the hydroelectric dams. Democracy, liberalism, and political participation in the truest sense of the words.

When MAS members won seats on the town council from the Conservative Party-dominated council in the 1980s, the threats and assassinations began. The first assassinated was doctor and social activist Julian Conrado David. According to witnesses, the police in the town park did nothing to attempt to stop the killer despite having been only meters from the murder. 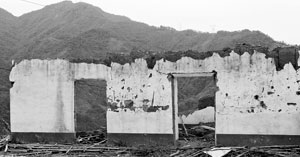 Every new massacre incited waves of refugees to add to Colombia’s growing internally displaced population. San Carlos had a population of just over 28,000 in the 1980s of which 20,000 left mostly between 1994 to 2003, a statistic that includes my uncle Mariano. Thirty rural districts out of the municipality’s 74 were completely abandoned and another 20 partially abandoned.

Alvaro Uribe was the governor, senator and president during the period with most assassinations and displacement.

My family had to stay away from their childhood land for over 20 years, only recently being able to return. My father has yet to go back.

The guerrilla groups’ actions, that were mostly directed towards the armed forces and development projects, unleashed the cruelty of the paramilitaries that wished to retake control of the key municipality.

As governor, Uribe was a staunch supporter of the CONVIVIR groups that many have called the forerunners to Colombia’s paramilitary organizations. The then-governor personally signed off on six of these paramilitary groups. By the end of Uribe’s governorship, massacres committed by the armed forces and paramilitaries in Antioquia and San Carlos had increased nearly eight times.

The paramilitary groups most active in San Carlos were the “Bloque Metro” led by “Doble Cero” (a former military officer), the “Bloque Cacique Nutibara” of “Don Berna“, and the “Bloque Heroes de Granada” led by “Danielito” or “El Mellizo.”

Together they committed 23 massacres, killing 206 civilians, and disappearing 42 with the collaboration of the military during 1998-2005. Nearly eight times the number the guerrillas committed.

Testimonies account that ‘Don Berna’ and ‘Doble Cero’ would often meet to support Alvaro Uribe’s political campaigns because Uribe had an “ideology akin with that of the paramilitaries.” It is no secret that Uribe’s presidential campaign received blood money from paramilitaries.

According to Jaime Atehortua, then a teenager who participated in civil society movements, “the army left the town one evening and through that same route came the paramilitaries a few hours later. That time they killed 13 people.”

The National Historical Commission documented the paramilitary incursion that killed my uncle. A FARC attack that killed several military and police prompted the government to abandon the region, allowing free passage for 200 paramilitary soldiers later that month. During the incursion 1,000 people were detained and community leaders were savagely beheaded and dumped into rivers and reservoirs. 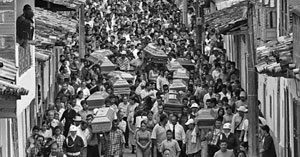 “Some of the people killed were wanted for the social and political leadership that although they were part of traditional party movements, searched to transform political practices. Among those assassinated were, Jesus Maria Urrego, Mariano Bedoya (my uncle), Victor Velasquez (my cousin), and Libardo Duque.”

“The paramilitary groups were never impeded by government forces in their work to cleanse the region of the guerrillas,” states the National Historic Commission.

Colombia’s 2014 presidential elections are quickly proving to be one of the dirtiest, most expensive, and scandalous elections in the nation’s recent history. Incumbent President Juan Manuel Santos has based his campaign on his attempts to reach a negotiated end to the armed conflict between the FARC rebel forces that has plagued this nation for over 50 years. Santos’s opponent, Oscar Ivan Zuluaga is the chosen candidate for former president Alvaro Uribe’s Democratic Center Party.

The Democratic Center which made their debut in the congressional elections in March has become one of the most powerful parties, winning the second largest number of seats in the senate and presenting a presidential candidate that beat the incumbent in the first round of elections on March 28.

It must remain clear that this election isn’t between Juan Manuel Santos and Oscar Ivan Zuluaga, but at a more fundamental level, a choice between the incumbent President and former President Alvaro Uribe. A choice between Santos’s decision to pursue peace, and Uribe’s desire to crush the “terrorists.”

It is absolutely ridiculous that Zuluaga even speaks like Uribe now. Anyone can listen to Zuluaga talk when he was a minister in 2006, and he speaks like a normal person. Today, Zuluaga is nothing more than a mouthpiece and apparently took public speaking lessons from Uribe to be able to mimic his populist rhetoric.

I personally can’t stand both candidates currently running for President. Both candidates propose essentially the same neoliberal policies for education, health, and the economy. They both would have supported the same development policies that would have brought the dams to San Carlos. Neither candidate tackles the roots of the armed conflict in Colombia.

However, at least Santos wants to remove the FARC and ELN from the incredibly complex equation that is the Colombian armed conflict.

Sadly, I must choose between bad and really bad. I would’ve liked to submit a blank vote, but I cannot consciously do that knowing it would favor Alvaro Uribe and Oscar Ivan Zuluaga to reach the presidency. I can’t and Colombians shouldn’t support a candidate backed by Alvaro Uribe who gave birth to the paramilitary groups that killed my uncle and dismembered a countless number of Colombians. To be quite honest, I am scared. I am terrified of what another four years of Uribe policies can do to this country.

Oscar Ivan Zuluaga is a puppet and it is petrifying to think that the real power behind the candidate remains in the shadows, completely unaccountable.

Voting for Zuluaga is the same as condemning this beautiful country to Uribe’s policies that introduced some of the bloodiest periods in Colombia. 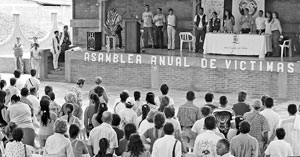 Vote with the victims of Colombia’s armed conflict, vote with the most marginalized, vote with the indigenous communities of Colombia, and vote with the afro-colombian regions. Remember that it is these voices that are rarely heard and yet live the daily violence of this war. Show solidarity with the ‘San Carlitanos’ that voted for peace in the first presidential round. These communities are voting to continue the peace talks in Havana, Cuba.

My vote is one of conscience and one of taking into account the history the history of my family. Alvaro Uribe continues to be part of Colombia’s 96% impunity statistic. Uribe is among the thousands that have yet to face a sentence or a fair trial concerning their complicity in the turmoil of the civil conflict. So until Uribe faces justice, I will vote for the lesser of two evils. Anything to keep that particular warmongering oligarch out of power.

The dark past of San Carlos is little more than history. Today, San Carlos is considered a model for post-conflict Colombia with those responsible from all sides living together in peace. Go visit and get to know the beautiful town from which Colombia and its politicians could learn a lot from.