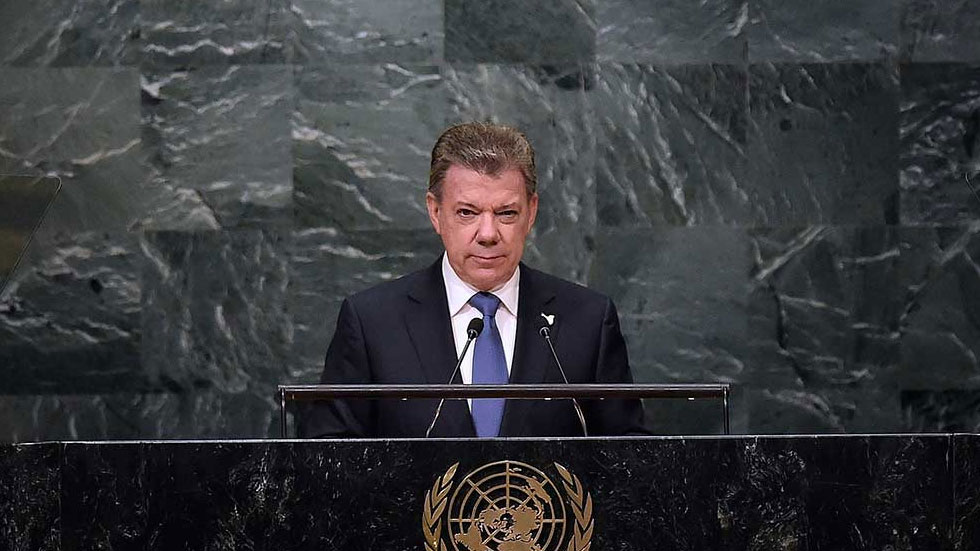 The war in Colombia is over, Santos tells UN

When attending last year’s General Assembly “I said I hoped to return here, in the year 2016, as president of Colombia in peace, a reconciled Colombia,” said Santos.

The Colombian president then proudly announced that “the war in Colombia is over.”

Santos told the General Assembly that on September 26 he will formally sign peace with FARC leader and that on October 2 Colombians will take to the polls to either ratify or reject the deal.

After the vote, the FARC’s approximately 17,000 fighters and militia members will demobilize and disarm under UN supervision before they enter reintegration programs or are referred to a transitional justice tribunal.

“Their weapons will be melted down and become monuments of peace….They will be reminders that we have left the bullets behind, and begun building a new and better country.”

“America, the immense American continent from Patagonia to Alaska, is now a zone of peace.”

Santos also made a point of thanking the members of the international community who had assisted the five-year talks that resulted in the peace agreement.

Cuba was instrumental as the country which hosted the talks, and Santos also thanked Norway, Chile, Venezuela, the United States, and Germany for their support throughout the process.

Aid for the peace process and logistical support have been pledged by numerous countries, and much of it will be administered through the UN.

“There is one less war in the world, and it is the war in Colombia!” Santos finished as the crowd of world leaders erupted in applause.

While Colombia is still dealing with smaller armed groups like the Marxist ELN group and the Gaitanista Self-Defense Forces, the deal with the FARC does end the country’s longest-running armed conflict in the hemisphere.