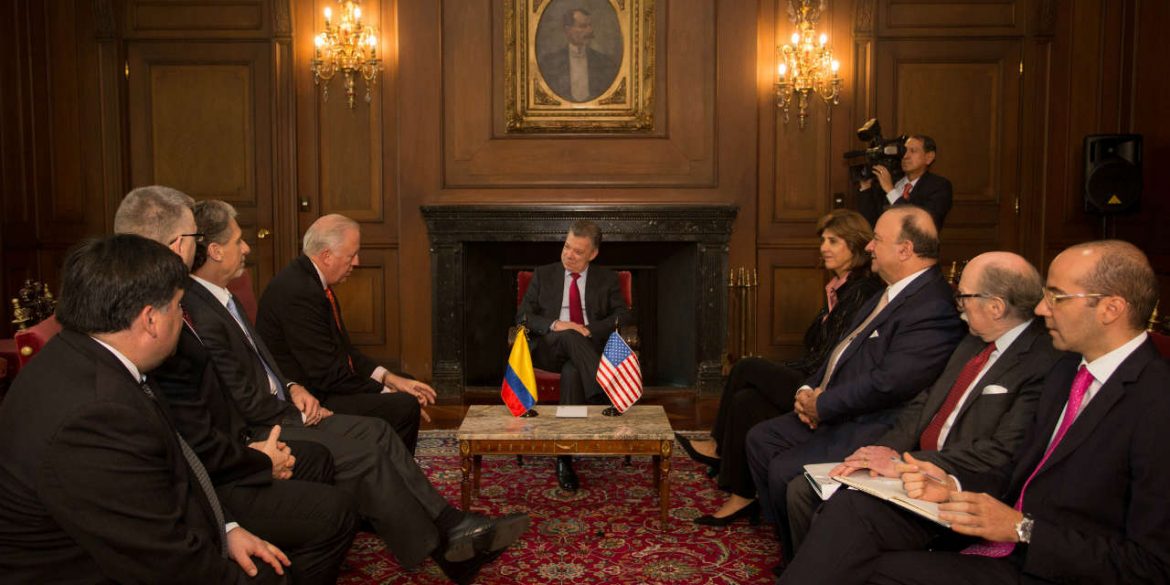 US tries to reassure Colombia with charm offensive in Bogota

A high-ranking US diplomat arrived in Colombia on Thursday with reassuring words of friendship, praise and commitment he said came straight from President Donald Trump.

Trump’s message is that “Colombia has no better friend and ally than the United States, because the prosperity of both are linked. Our interests and values are the same,” said Thomas Shannon, the US undersecretary of state for political affairs, in public comments after his arrival.

Trump and the US are “committed to the alliance with Colombia to support sustainable peace, combat transnational crime and improve regional security,” he added.

Shannon’s visit came just three weeks after his boss, Secretary of State Rex Tillerson, drew a tepid reaction for his trip to Colombia and four other Latin American nations.

Tillerson’s attempt at diplomacy was undermined by his reiteration of the two-century old Monroe Doctrine claim that Latin America is in the US sphere of influence and no one else’s. Tillerson also had hinted at a military coup in Venezuela and put extreme emphasis on the demand that Colombia rapidly reduce its production of coca, the raw material of cocaine.

The Monroe Doctrine was articulated in President James Monroe’s seventh annual message to Congress on December 2, 1823. The European powers, according to Monroe, were obligated to respect the Western Hemisphere as the United States’ sphere of interest.

Nevertheless, his remarks came tangled in a high level of uncertainty about US intentions. By attributing the amicable words to the US President, Shannon wanted to give Colombia reassurance about its continued support despite Trump’s recent budget proposal to slash aid to Colombia.

But the fact he put the words in the President’s mouth renders the gesture meaningless, because–as US commentators from across the political spectrum have noted–what Trump says in the morning he may contradict by evening.

Trump seeks to cut US aid to Colombia in half, but will congress approve?

For example, on the same day Shannon arrived in Bogota, Trump surprised even his closest advisers and supporters by launching a trade war over steel and aluminum.

And the day before, he astounded everyone by calling for stricter controls on access to guns, a position that left his political opponents delighted and his strongest supporters dumbfounded. Few believe Trump will stick to that position either.

So what will matter most is not Shannon’s expression of Trump’s faux friendship, but the concrete steps he will discuss privately with Colombian leaders.

For example, Tillerson had promised to consider the US giving Colombia additional financial aid to help it cope with the surge of Venezuelan refugees. Given the urgency of the refugee crisis, it’s been time enough for the US to have made up its mind about that. But Shannon didn’t mention it in his public comments. Is the money coming or not?

US may help Colombia deal with migrant flow from Venezuela

That topic was broached, however, by Colombian Foreign Minister Maria Angela Holguin, in her public comments welcoming Shannon. Colombia is confronted by Venezuelan migration, she said, people who have come “in search of food, medicine and work that allows them to survive.”

“Colombia is not a country that in its history has received waves of immigrants,” she continued. “Now we must be generous and help the Venezuelans.”

Also, the violence against community leaders hasn’t slackened, especially those in lawless rural areas working to substitute coca, the base ingredient for cocaine, with other crops. At least four more have been assassinated in the short time since Tillerson’s visit. Human rights advocate German Espinel survived an assassination attempt in Bogota.

The non-governmental monitoring organization Indepaz has counted 36 assassinations of social leaders in the first two months of 2018, a rate of more than four each week.

Shannon broke the US’ silence on these issues, which are make-or-break for Colombia’s ability both to sustain peace and to reduce coca farming, a chief US objective.

The US official announced the formation of a “working group for technical assistance for prosecutors and investigators that concentrate on the killing of human rights defenders and social leaders.”

Shannon said his goals for the trip include discussing the “enormous increase” in cocaine production, regional security (that is, Venezuela), and the training of Central American military and police forces, for which the US relies heavily on Colombia’s US-trained and equipped soldiers