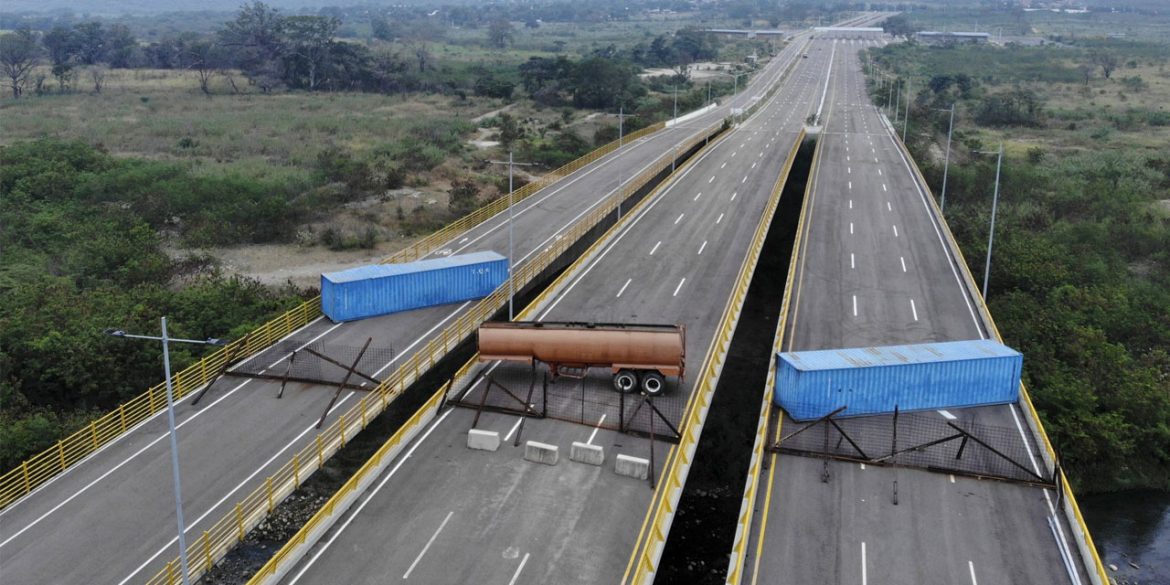 Colombia is just a pawn in the US-led offensive for regime change in Venezuela. And what the US is doing to Colombia is undermining the country’s only viable path to a safer and more prosperous future.

As a life-long US citizen now with homes in both the US and Colombia, it is painful, embarrassing and deeply disappointing to see the photos of US Air Force cargo planes landing in Cucuta, and Senator Marco Rubio, a Florida Republican, posing and pontificating in front of piles of relief supplies for Venezuela.

The US operation at Cucuta, on the Colombia/Venezuela border, is not a sincere humanitarian project for suffering Venezuelans. It is a publicity stunt that is part of US National Security Adviser John Bolton’s global geo-political strategy.

It is a brilliant stunt, because media from all over Colombia, the US and the entire world have swarmed Cucuta to show the supplies that are at the border with Venezuela.

The supplies were not stationed at the Simon Bolivar bridge, the actual border crossing, but the Tienditas bridge, which hasn’t been opened yet.

This feeds the perception that the only way to help Venezuelans is a forced regime change.

From Bolton’s point of view, Colombia’s role is merely that of being a pliant, convenient backdrop for his media offensive. Colombia, long the US’ strongest military ally in Latin America, is an obedient partner in his global strategy.

This is not meant as a defense of Venezuelan President Nicolas Maduro, whose cruel tyranny is not defensible.

But forced regime change by the US in Venezuela is a bad idea, as proven over-and-over by US fiascos in regime change in Latin America, the Middle East, northern Africa and southeast Asia.

At the same time, overall US policy toward Colombia is more likely to result in maintaining the country’s severe inequalities and increasing its political instability, rather than supporting Colombia’s path toward peace, stability and prosperity.

Colombia is in a crisis at the moment, but it is not one produced by the million-plus Venezuelan refugees in the country. Nor does it have anything to do with Bolton’s claim that Islamic terrorists and Russian and Chinese interests are using Venezuela as an entry point into the Americas.

What is driving the political crisis in Colombia are two things. One is the high level of government corruption and the public awareness and disgust at it. The other is the deliberate undermining of the remarkable path to peace that was laid out in the peace treaty with the FARC negotiated by ex-President Juan Manuel Santos.

Here is one of the obstacles Colombia faces. A systematic assassination of rural social leaders has been underway for several years. Last year, 123 assassinations occurred, a rate of one every three days, according to WOLA, a Washington, D.C. based nonprofit. Last month (January 2019) another 13 were murdered.

The UN concluded that the assassinations are part of a coordinated and systematic plan, though it was unable to identify the plotters. Is it credible that Duque and other ranking members of his right-wing government don’t know who is behind the killings?

Further, the essential rural infrastructure that is desperately lacking in rural Colombia is not being built, as was promised by the treaty. This makes it extremely difficult for Colombian farmers to shift away from growing coca, the main ingredient in cocaine. Without roads, how can alternative products get to market? With coca, on the other hand, buyers will come to the rural farms, in helicopters if need be, to purchase.

And the absence of credible Colombian government in much of the country has allowed drug-traffickers, large landowners and armed groups from the left and right fill the vacuum left by the withdrawal of FARC.

Meanwhile, the US focuses narrow-mindedly on the quantity of coca grown in Colombia as the only important measure of progress in the country. Thus the US is pressuring Colombia to intensify all its methods of forced coca eradication, including aerial spraying of the possibly carcinogenic herbicide glyphosate.

When US officials talk about Colombia, they do not mention the fundamental issues bedeviling Colombia’s countryside. During President Ivan Duque’s recent 5-day trip to the US, where he met with government and private sector leaders, I found not a single reference in either news coverage or formal statements to the rural assassinations, the infrastructure needs, the creation of long-lasting, economically sustainable alternatives to coca, and the lack of a government presence in much of the country.

Not one reference was made during Duque’s visit to the efforts to dismantle the special courts set up by the FARC peace treaty to hold leaders of both the FARC and the military accountable for massive human rights violations.

The same is true of Sen. Rubio, who loudly defends the US goals of both unseating Maduro and of using force to destroy Colombian coca production. That’s what makes his showboat appearance in Cucuta so distasteful.

The US approach to Colombia has long been based on two goals: reducing coca production and destroying the left wing. This was true under both Democratic and Republican administrations and Congresses, and led to the US providing Colombia with more than nine billion dollars in military aid since 2000.

The last years of the administration of former President Barack Obama saw a small but noteworthy shift in direction. Obama supported the peace talks with the FARC and the resulting treaty. Obama was sympathetic to critics of the War on Drugs, which sees soldiers rather than health professionals as the key to reducing drug abuse.

Former Colombian President Santos took the credibility and visibility he secured after being awarded a Nobel Peace Prize and tried to move people away from War on Drugs. And Santos made sure to emphasize that the cocaine issue was driven by demand from the US and Europe rather than the supply coming from Colombia.

But Trump and Bolton have trashed those encouraging departures from long-standing policy. As a result, the US remains focused on narrow and counterproductive projects.

The real needs of Colombia are such things as ending the assassinations; connecting rural areas with the rest of the economy; following through on the post-war tribunals; bringing government rather than non-state actors into control of the entire country. If US policy isn’t aligned with these needs, it will be extremely difficult for Colombia to move ahead.

Regarding Venezuela, the pile-up of supplies in Cucuta is the symbol of the US commitment to the futile policy of forced regime change. Looking at the history of such US interventions, it is clear that that the probabilities are much greater that this kind interference leads to more violence and instability rather than less.

US foreign-policy hawks such as Bolton have learned some lessons from past failures. They know, for example, that a straightforward US invasion of Venezuela is not feasible.

But the hawks have not learned to avoid forced regime-change altogether. Just as US policy-makers underestimated the fracturing and violence that would occur after the invasion of Iraq, so too in Venezuela.

There are too many armed actors, including not only the military but also the Colombia-based ELN Marxist rebel army, and too many supporters of Maduro to avoid a high likelihood of civil war.

There are many casualties of the US approach. Among them is the respect many Latin Americans have for the US. Opinion polls show a significant drop in the popularity of the US since Trump took office.

And well-meaning people who know better get caught up in supporting the US focus on Maduro and coca acreage.

Consider career diplomat Kevin Whitaker, the US ambassador to Colombia since his appointment by Obama in 2014. Because right-wing US senators blocked the approval of his named successor, he remains in Bogota as a lame duck. He is now the longest serving US ambassador to any country.

Whitaker, an able diplomat, was a good choice to begin implementing the changes that Obama initiated. But he has now become a mouthpiece for the Trump/Bolton doctrines, with frequent press releases and tweets echoing the views of the two higher-ranking officials.

Certainly it is his proper duty as ambassador to implement US policy as it is demanded of him by his superiors. But doing so harms Colombia.

It is a difficult choice for a career diplomat to resign and signal a protest at US policies. But as a loyal US citizen and as a friend of Colombia, I wish he would.