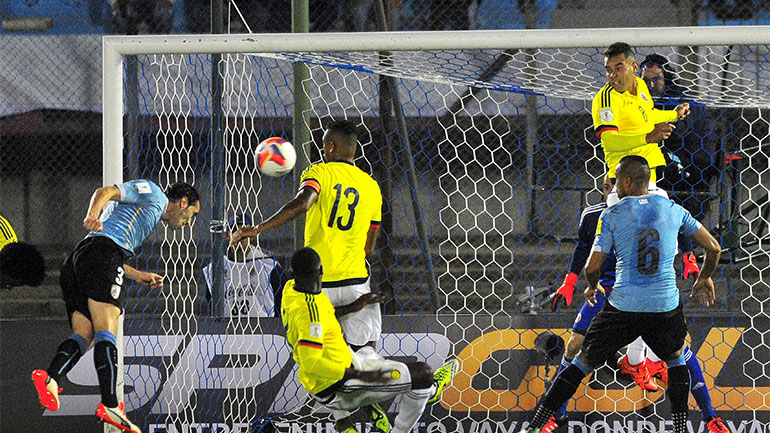 Uruguay, missing the suspended Luis Suarez and Edinson Cavani, suffered another blow when full back Martin Caceres went off injured after just 18 minutes.

However, the home side took the lead after 33 minutes when center back Godin rose to bullet home a header from a Carlos Sanchez corner kick.

Rolan added a second six minutes into the second half when he took a cross from Nicolas Lodeiro and deftly chipped the ball over Colombian goalkeeper David Ospina.

Hernandez got a third after 87 minutes when he wrestled free from a defender and hammered home from a tight angle.

Colombia, who were without the injured James Rodriguez, came closest to scoring when Carlos Bacca’s header hit the post but they never looked like beating the home side.

To cap a miserable night for Colombia, Juan Cuadrado was sent off in the final minute for elbowing Rolan in the face.

Uruguay now have a maximum six points from their two games while Colombia have three.

All 10 South American teams play each other home and away with the top four qualifying automatically and the fifth-placed team going into a play-off.