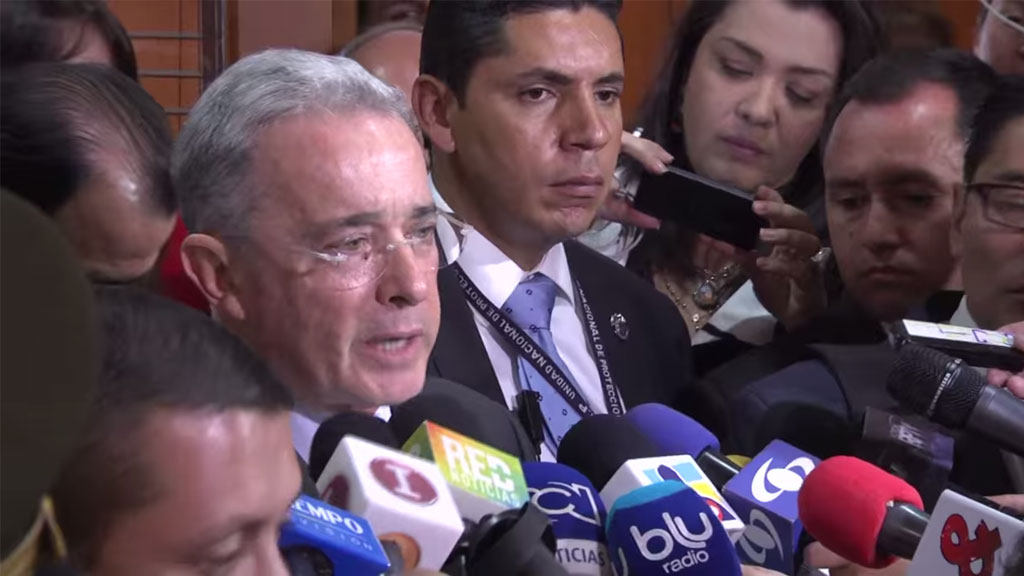 Uribe appears before Supreme Court to respond to spying allegations

Former President Alvaro Uribe appeared before the Supreme Court on Tuesday to defend himself against allegations that he was involved in illegal spying of the peace talks to benefit the campaign of his hand-picked 2014 presidential candidate.

Uribe explained to the Court that Andres Sepulveda, a hacker who has testified that he was hired by Democratic Center candidate Oscar Ivan Zuluaga to spy on the peace talks, instead infiltrated the campaign of Zuluaga on behalf of incumbent president Juan Manuel Santos in an effort to sabotage it.

While addressing the allegations of Sepulveda was the primary reason Uribe appeared before the Court, he also took the opportunity to vehemently defend a slew of his associates who have recently been convicted of various crimes related to corruption and espionage, submitting a 74 point summary of the “injustices committed against officials who accompanied me in government” when president between 2002 and 2010.

The officials in question included former interior minister Sabas Pretelt and former social minister Diego Palacio, both convicted of bribing Colombian congressmen to support a constitutional amendment that allowed Uribe to run for reelection in 2006.

Former Peace Commissioner Luis Carlos Restrepo fled Colombia amid an investigation of his alleged involvement in the fraudulent demobilization of a non-existing FARC front days before the 2006 elections.

“These are honest people, without duplicity in the fight against terrorism, people who never stole a peso, who defended national security,” according to Uribe.

Uribe appeared to devote little time to the accusations of spying that spurred his appearance before the Supreme Court, simply writing off Sepulveda’s claims as completely false.

Uribe is only one of numerous members of the Zuluaga campaign, including the former presidential candidate himself, in legal trouble over Sepulveda’s spying.

Zuluaga’s campaign manager was caught on film together with Sepulveda trying to provide material obtained through the spying practices to television network RCN. Zuluaga himself was filmed by a disgruntled employee when being informed by Sepulveda about his work.