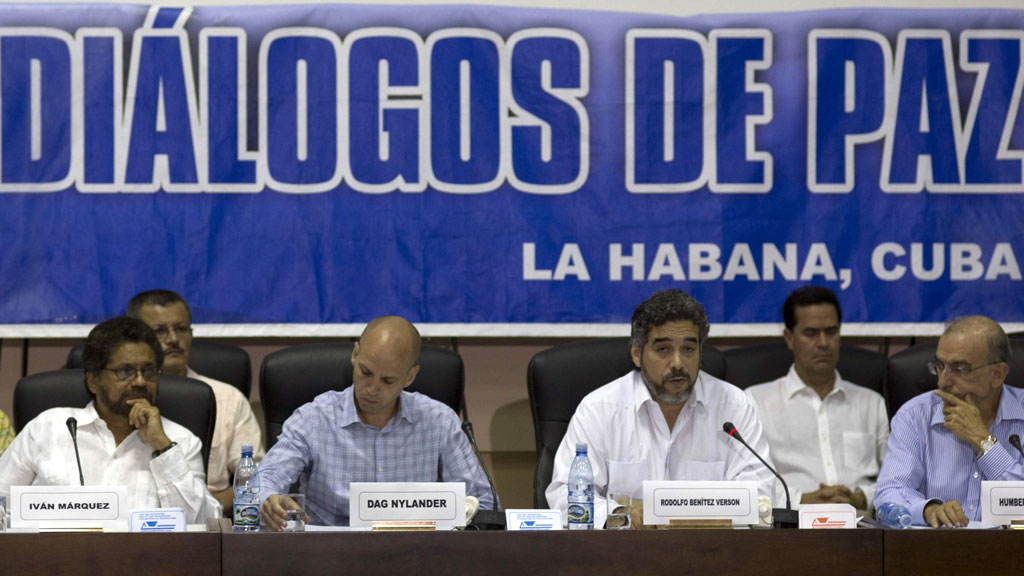 In a step forward in the support for Colombia’s peace process, both the World Bank and Germany have pledged financial aid and legal expertise to support post-conflict and transitional talks between the government and the FARC.

President Juan Manuel Santos on Tuesday signed an agreement with the World Bank, supported by the Swedish government, to establish a multi-donor fund for the post-conflict phase in Colombia.

The financial support will reach more than $38 million to go towards the repair of communities affected by the armed conflict in the country.

“It will assist the Unit for Victims in the validation and improvement of a participatory framework for collective progress, taking into account the type of group (ethnic community organizations and social groups), regional and contextual conditions and the type of measures priority target groups for collective redress, “says the document signed.

“We see very positively to increasing efforts to complete reparation process initiated by the government of Colombia, headed by President Juan Manuel Santos,” said the general director of the Unit for Victims, Paula Gaviria.

In addition to the cooperation from the World Bank, Europe also took a step forward in support when Germany’s Foreign Minister visited Bogota over the weekend to discuss the peace process with President Juan Manuel Santos.

As a result of these talks, the foreign minister Frank Walter Steinmeier offered Colombia legal expertise to help support during the transition to peace.

Speaking after his meeting with the Colombian president, Steinmeier said that “his country knows from experience that such processes are “difficult and arduous” and that “roads are never direct.”

In the interview with El Tiempo, Steinmeier said that “It’s very important to me to ensure that, despite the serious crisis in Ukraine, we don’t neglect our important relations with Latin America. As an important, up‑and‑coming country, Colombia plays a very important role in this. The country is going through a decisive phase of its history and I hope that 2015 brings peace for the people of Colombia. There have never been such high hopes of ending the conflict which has lasted for over 50 years.”

The foreign minister, who recalled the recent history of Germany, said his country has twice been through the “processes of intra-social historical memory and reconciliation”, so he offered this experience to Colombia to help.

“Germany has supported the peace process for many years and will continue to offer its support in the post-conflict phase. In doing so we’re offering to share our own experience of coming to grips with the past. In my talks in Bogotá I want to make concrete proposals on how we could do this,” Steinmeier said in the interview.

He also expressed his confidence that this year of fruitful dialogue between the government and the FARC would lead to peace, and that he expected the other rebel group, the ELN, to join the process soon.

Economic promise and looking to the future

The German Ministry of Commerce, Industry and Tourism also said in a press release that the mission highlighted the good performance of the Colombian economy and expressed great interest in investing in the country.

Entrepreneurs who accompanied Steinmeier said that the growing presence of young people and middle class in Colombia offer a great attraction for investors.

“My visit will also focus on strengthening trade and economic integration as well as intensifying our cooperation in academia and research. Many high‑ranking representatives of German companies and scientists are accompanying me for this reason,” Steinmeier said in the interview

The German foreign minister also endorsed scientific cooperation agreements between the Administrative Department of Science, Technology and Innovation of Colombia (Colciencias), the Max Planck Society (Germany), the University of Antioquia and the National University of Colombia.

When asked about how he saw Germany’s relations with Colombia unfolding in the future, Steinmeier said: “I see Colombia and Germany on the path to a close, trusting and increasingly important partnership in tackling global challenges. Colombia is prepared and in a position to play an active and positive role when it comes to international security, the fight against drugs and terrorism or environmental and climate protection.”

The German Foreign Minister went on to praise Santos’ announcement that Colombia wants to take on more foreign policy responsibility on the international and approved of his desire for cooperation with the EU.

“We support Colombia’s journey towards OECD membership and have made good progress in fully implementing the free-trade agreement with the EU. These are achievable steps,” Steinmeier said.

The German Foreign Minister did however express concerns about relations with Colombia’s neighbors such as Venezuela and Ecuador.

While on a trip to Paris in January, Santos held talks with the French government to gain support for the peace process in Colombia.

Colombia looks at France for ideas on rural development, education and police

The Colombian agriculture minister signed an agreement with the French government in which the French commit to cooperate in the development of rural education in the South American country.

According to the Agriculture Minister Aurelio Iragorri, France’s experience in specialized education for rural communities is “invaluable for the goal to succeed in making the countryside more attractive for the youth.”

The French government agreed to help create “a formation and education pilot specialized for peasants, based on the interests and conditions they live in.”