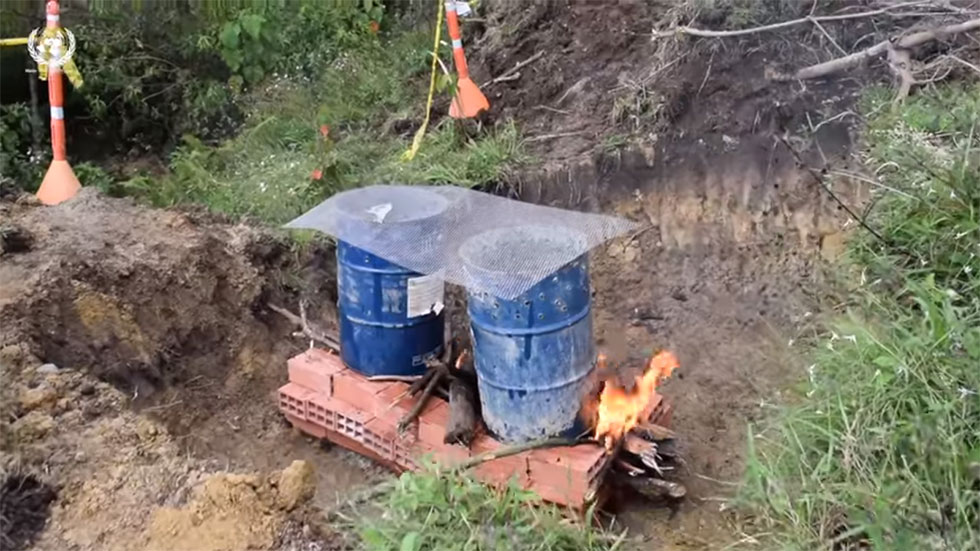 How the UN is incinerating ammo of Colombia’s FARC rebels

The video, which depicts UN monitors shoveling thousands of bullets into drums before setting them alight, was published on July 7, just weeks after the FARC guerrilla group officially disarmed as part of the historic peace agreement signed late last year with Colombia’s government.

The start of the munitions incineration process was confirmed the same day by General Javier Pérez Aquino, head of the UN mission in Colombia.

“In the 26 areas of disarmament, the process of destruction of ammunition registered and stored in containers has begun,” he said, referencing the 26 transitory camps where demobilized FARC members handed over the last of their weapons to UN monitors in late June.

According to local newspaper El Espectador, the UN has so far incinerated around 987,800 bullets of differing calibers.

Along with the incineration of munitions, the UN confirmed that it had begun locating and destroying 660 of the 949 hidden caches of FARC weapons around the country, reported Semana.

In 94 of the caches located so far, the UN mission has reportedly recovered 321 weapons and destroyed nine tons of unstable explosives, including 1,189 hand grenades, 329 antipersonnel mines, 92,131 light weapon rounds, and 243 mortar rounds.

General Perez Aquino noted that the operation will continue until September 1, after which any caches “that have not been dismantled will remain at the disposal of [Colombia’s] national government which will count on the collaboration of former FARC members, who will work on locating and dismantling those caches”, reported news outlet RCN.