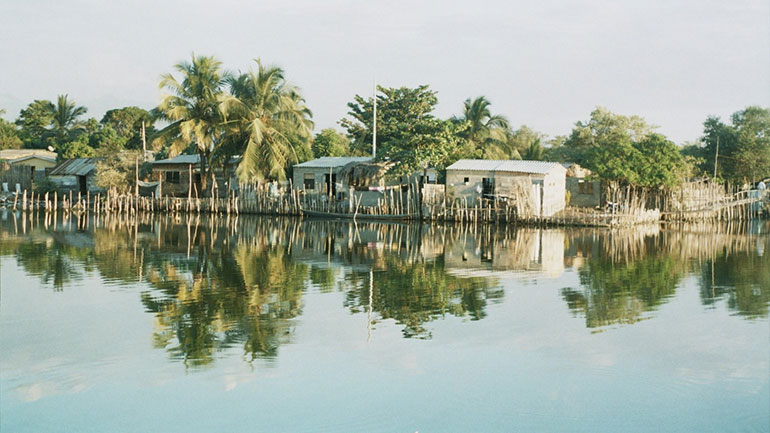 El Oasis, a community of displaced fishermen on the shores of the Cienaga Grande (Image credit: VELA Colectivo)
News

Colombia’s largest wetland could be completely destroyed if more is not done to reverse decades of neglect.

Designated a UNESCO Biosphere reserve and a RAMSAR Protected Wetland, the Cienaga Grande in the coastal state of Magdalena has been both a battlefield of Colombia’s decades-long civil war and for environmental issues that continue to affect a regional population who depend on it for their livelihoods.

El Oasis, populated mostly by fishermen displaced from Colombia’s ongoing internal conflict, is an impoverished Caribbean settlement located on the periphery of wetland. Part of Cienaga town’s municipality, El Oasis is a current and tragic representation of the continued deterioration of the Cienaga Grande’s fragile ecosystem. 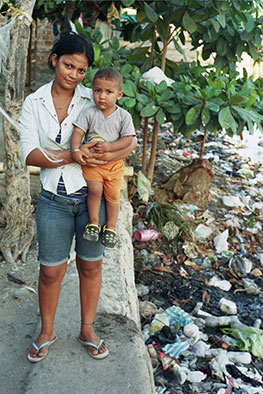 Tatiana, 19, and her young son stand behind their house on the shore of the Cienaga Grande. Here she throws out all of her trash as the community of El Oasis has no sewage or a waste disposal system. (Image credit: VELA Colectivo)

The community is a series of shacks constructed out of discarded wood and plastic with foundations made up of trash that litter the shore of the wetland. The water itself is lifeless, stale, and plagued with disease. With no sewerage system in place, the families that make up this neighborhood are forced to empty out their toilets directly into the Cienaga Grande. The waste on which this community is built on gives the neighborhood a permanent smell of decay.

At 70 years of age Elizabeth Camargo explains the degradation of the wetland and life before the civil conflict forced her and 150 other families to flee their native village of Bocas de Aracataca in the Cienaga Grande’s southern region.

“Life was spectacular 16 years ago. Back then we just had to throw a net outside our house to catch something. Now our boys go out for up to five or six days. Sometimes God gives them fish, other times nothing,” she says and adds that the community lived a better life despite not having any electricity or luxuries like TV as the wetland provided them with everything they needed.

Now the new generations of fisherman living in El Oasis have uncertain futures ahead of them. 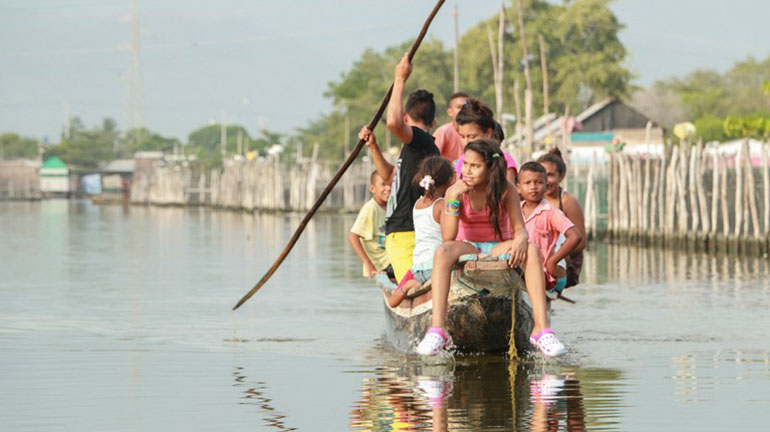 Due to the continued degradation of the wetland, the elders of El Oasis community see no future in fishing and hope the youth abandon the ancestral profession. (Image credit: VELA Colectivo)

According to Luis Alejandro Bastidas from Colombia’s National Parks Agency, the Cienaga Grande has gone from providing 35,000 tons of fish a year to just over 4,000 tons last year, heavily impacting the livelihoods of some 5,000 fishermen in the region.

For Bastidas the Cienaga Grande has been subject to systematic destruction from all fronts.

In the northern extremity, the wetland has been separated from the Caribbean Sea by a major highway connecting the major coastal cities of Barranquilla and Santa Marta. This artificial partition has hindered the the natural exchange of ocean water and fresh water that the wetland’s ecosystem greatly depends on to maintain optimal levels of salinity — an imbalance that, according to local media, has led to the loss of nearly 29,000 hectares of mangroves.

Adding to the human impact are the natural effects. The Cienaga Grande borders Colombia’s largest river, the Magdalena, which provides the wetland with 60% of its fresh water during rainy season by flooding the mangrove plains. However, much of the Magdalena is nearly dry, largely due to the El Niño phenomenon, and hasn’t swelled since 2013.

The intense drought currently affecting large parts of Colombia have generated reports of people crossing parts of the Magdalena on foot due to the extremely low levels of water, and also using some of its associated riverbeds as roads.

“With the Magdalena river going dry the only immediate salvation for the Cienaga wetlands are the four main tributary rivers that normally provide 40% of the Cienaga Grande’s water,” adds Bastidas.

But the water’s quality and flow of these four tributaries, which come down from the nearby Sierra Nevada mountain range, have been adversely impacted by large-scale banana and palm oil plantations surrounding the wetland.

According to UNESCO, a development project to address environmental issues of the Cienaga Grande and improve the socio-economic conditions of the local communities was launched in 1994. Because of this initiative “some” mangrove areas have been recuperated.

However, both Bastidas and the people from El Oasis concede that the 14 municipalities surrounding the Cienaga Grande are notoriously corrupt, a reality that inhibits regulations of large agricultural industries and effective progress of socio-economic programs. Furthermore, the lack of education on environmental practices and basic sanitary infrastructure required for peripheral communities such as El Oasis means that a needed holistic improvement of the wetland’s environment remains far off.

“There has been a lack in political and institutional compromise to restore the flows of the four rivers,” confessed Bastidas. “This is our last chance to decide if we are going to allow this national tragedy to happen or save it [the wetland].”