With presidential elections coming in two months, some of Colombia’s citizens are left with the bitter taste of last week’s congressional poll riddled with accusations of electoral fraud, and an alleged $1.5 billion worth of public money spent on “mermelada” – the illicit funding of politicians.

Spreading the political “jam” in Colombia refers anything from the money to the immaterial capital — such as, for example, a promotion — that can be used by politicians to gain political support.

In the lead up of what electoral observers called the most corrupt election in recent years, former president Alvaro Uribe’s new political party, the Democratic Center, fired attacks at President Juan Manuel Santos’ government for investing millions in corrupt practices.

From the “sweetening up” of congressmen by presidential candidates to guarantee the support of the legislative, to the illegal use of public funds by congressmen to commit electoral fraud, subsequent reports from various sources have uncovered that some individual politicians have received public money worth over $56 million.

“Yes, it sounds incredible to suggest the government used tax payers’ money to subsidize corrupt politicians to pervert the electoral process … but it’s an allegation many commentators and politicians continue to insist is true,” Kevin Howlett, a political analyst with Colombia Politics told Colombia Reports.

Newly-elected senator Alvaro Uribe and his supporters claim that the current administration dedicated $1.47 billion towards the practice, though the reliability of their data is questionable.

How the money is spread

“In terms of ‘mermelada’ for votes there are various aspects at work,” Howlett elaborates. “The accusation is that the money given to the politicians is then used directly to buy votes. Yes, directly to buy the votes.”

“Sometimes it’s indirectly, through clientelism. [That is to say], jobs or pet projects for local ‘friends,’” Howlett says.

“Some of the money is for infrastructure works … some of it is in kickbacks on contracts. Many columnists have claimed that kickback on contracts can be something in the region of 18%.”

Las2Orillas’ hefty assertions, reportedly sourced from the government’s own “Presidential Palace computer,” are specifically to do with money handled by congressmen to be invested in regional projects.

Nevertheless, these projects are often used to disguise the funding of the politicians themselves — though state sponsorship of politicians is supposedly forbidden.

Of the $184 million that allegedly went into the pockets of the 20 congressmen favored by the government between the years 2012 and 2014, more than $87 million was given to the first three alone.

All but one of the 20 congressmen and women belong to parties of the pro-Santos coalition, the majority of which are of the Conservative Party, followed by the incumbent U Party. The rest are of Liberal and Radical Change coalition parties, or of the Citizen’s Option party.

Congressmen who received most of the “jam” taken from road works

Interestingly enough, the biggest cash flow was destined to officials not as overtly in the public eye as others.

The man dirtied by the most “mermelada” money is supposedly U Party Senator Musa Besaile Fayad, from the Cordoba department in northwest Colombia, who with more $56.7 million racked up double the amount of votes this year compared to those received in the 2010 congressional elections. 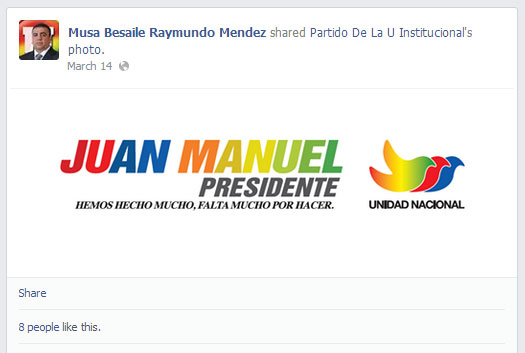 Musa Besaile’s endorsement of President Santos
on the day of the senator’s election.

Besaile has been in the spotlight before, however, as in December 2013 murder charges against him were dropped for lack of evidence. At the same time, there was an ongoing investigation into Besaile’s involvement in supposed irregularities in the election of Alejandro Ordoñez as Inspector General – which is voted on by Congress.

In the meantime, the biggest “winner” of the corruption game was Valle del Cauca’s Roosvelt Rodriguez Rengifo — once again of the U Party — who with a “mermelada” of $1 million received a total of 100,229 votes in 2014, seeing his popularity boost a dramatic 283% since the previous elections.

One of the most significant sources of illicit political sponsorship revealed by Las2Orillas highlights the direct correlation between the amount of regional road work funds directed at 14 politicians, and their subsequent success at the 2014 congressional elections.

Of the state money supposedly intended for rural road projects, $736 million in total fell to illegal political sponsorship, according to the report released on Monday.

The five congressmen who received the most “mermelada” — over $77.4 million among them alone — saw their election success boosted by 93.8% on average.

The amounts granted for each of the road works — part of one of Santos’ pioneer policies, though criticized for being heavily corrupt – were wildly inconsistent and often disproportionate considering the length of the roads themselves.

Senator Besaile once again found himself top of the list with nearly $33.4 million. He received funding for 29 projects, including figures surpassing $2.2 million for 6.8km of track, and $984,000 for 4 km.

Congressman Pedro Muvdi, of the state of Cesar, received the heftiest single grant of over $3.7 million for 26km of road.

For months, “Uribistas” have been attempting to sully Colombian President Juan Manuel Santos’ name by publishing claims that the current government handed congressmen over 1,950 senior positions and 597 service contracts in exchange for support to the incumbent head of state.

Because the more support President Santos gets from parliament, the easier the passage of current laws will be, giving him an automatic leg up in his re-election bid in May.

Though they were outlandish claims, it would seem, as this data was readily contested by political news website La Silla Vacia. According to the Colombian media platform, it was denounced that Santos had “buttered up” 166 of 2014’s congressional candidates.

Upon closer inspection, however, nearly half of all the positions supposedly given out actually referred to people that have been in office since Uribe’s own government. Not only this, but half of those pertaining to the current government period are no longer in office.

After sifting through a cluster of repeated and incomplete information, La Silla Vacia legitimately found only 44 possibly dubious senior positions. Of those, once again, 21 had entered office during Uribe’s administration.

In the end, only 13 of the 21 positions found to have been granted by Santos remain in office.