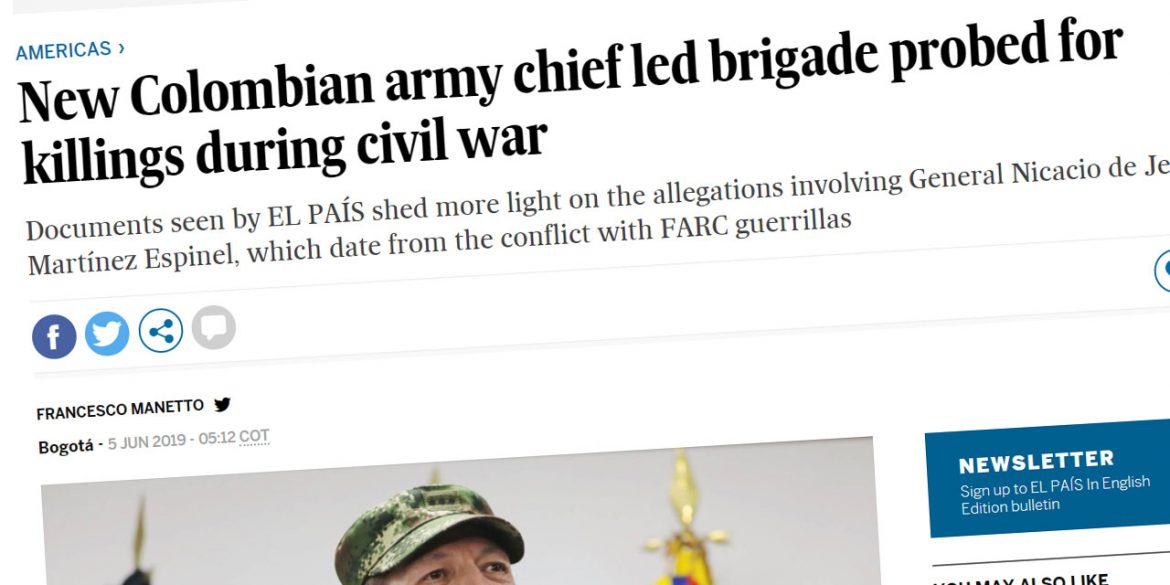 A member of Colombia’s army has demanded the bureau chief of Spanish newspaper El Pais to remove an article on human rights violations allegedly committed under the army chief’s watch.

In a letter, soldier Juan Carlos Galvis maintained that the article “New Colombian army chief led brigade probed for killings during civil war” mentions him by name. It doesn’t.

Nevertheless, Galvis demanded that journalist Francesco Manetto should not only “correct” his coverage, but take the article offline and issue a public apology for violating the “fundamental right to a good name.”

W Radio reported that sources have said that this is the first of many attempts to challenge foreign media reports on human rights violations by the Colombian military.

The allegations against Galvis

The article in question addressed the allegations of involvement in extrajudicial killings against National Army commander General Nicacio Martinez when he was colonel in the army’s 10th brigade.

It focused on the 2006 extrajudicial killings of three civilians and rape of two women on an indigenous reserve, allegedly committed by the Group of Unified Action and the 10th Brigade.

Three soldiers were imprisoned for the murders, one of whom was Juan Carlos Galvis.

They were released in February 2017 after 8 years in prison on the grounds that their guilt had not been proven beyond reasonable doubt.

Galvis argued that the original conviction constituted a miscarriage of justice, as the bullets used in the murders could not be proved beyond reasonable doubt to have come from his gun.

Manetto defended his article, telling W Radio that he “made no mention of that official in my article. I became aware of his existence only when he wrote to me. His name appeared neither in print nor online.”

A culture of censorship?

Galvis’ attempt to silence damaging criticism is far from an isolated incident. Recently, publications running stories about human rights abuses have found themselves under pressure from the army and the political right.

In the wake of a recent New York Times article alleging that Martinez had issued orders for soldiers to double their kill counts, the Times’ bureau chief felt compelled to leave the country.