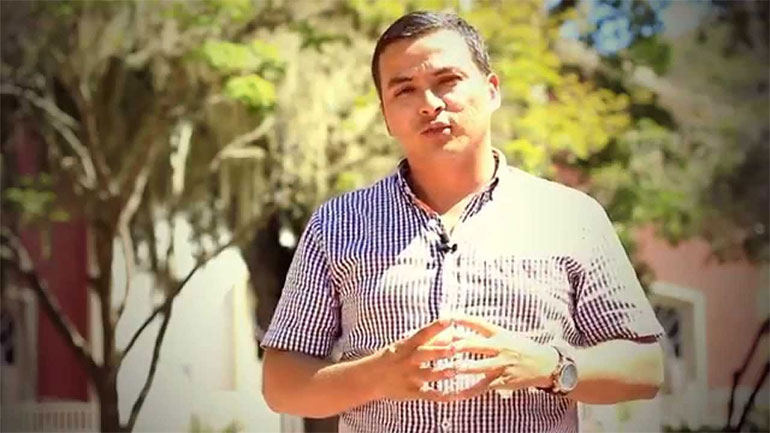 For the first time in Colombia’s history, an openly gay candidate was elected mayor on Sunday, marking a milestone for the country’s gay community.

The candidate, Julian Antonio Bedoya, 34, ran for mayor under the Democratic Center party, led by ex-president Alvaro Uribe, in the local elections of Toro, Valle, winning the seat with 52% of the votes.

The fact that a gay candidate was elected under the Democratic Center, an ideologically conservative party which has traditionally maintained a Christian stance on issues as abortion, gay marriage, drug use and euthanasia, adds to the ground-breaking dynamic of Bedoya’s victory.

For Wilson Castañeda, director of Affirmative Caribbean, an institution that was responsible for leading the Observatory of Political Participation of LGBTI People in Colombia, Bedoya’s affiliation with the Democratic Center shows that the gay movement does not belong to one ideological category, but to all political parties alike.

“We believe that what’s happened with Julian shows that the movement has a lot to give back to democracy. It is a clear message to political parties, he ran under the right (Democratic Center), and this situation shows that it isn’t just a leftist fight, but one of human rights and dignified life,” Castañeda explained.

Like all other elected officials, Bedoya must work equally hard and perhaps even more so to implement his programs and administration goals. Representing the gay community, however, adds a greater challenge to Bedoya’s new position, described the leader of the LGBTI community in Valle, Angelo Araujo.

“The challenge for Julian is immense, he should be a good mayor and represent the LGBTI community; for this, he should do it with the best administration possible. It serves nothing to have an openly gay candidate and have problems of corruption that leave things unfinished in his municipality,” stated Araujo.

The election of Bedoya represents a significant growth in the political participation of the LGBTI population, evolving from sporadic appearances on election ballots to now carrying measurable weight in political and electoral processes.

The LGBTI movement obtained a double win in these elections with the participation of 72 candidates. The level of participation proves that political parties have been supporting the candidates of this population and demonstrates that the civic culture is changing in Colombia.

At press time, according to the survey conducted by Caribbean Affirmative, other favorable experiences in this election for LGBTI include Ramon Rojas, who was elected for the third consecutive time the Council in Chaparral (Tolima).

Rojas, who is transsexual, said the LGBTI community is coming to understand that it can not only be stylist, but that it can also appear on the national level.

The new mayor Bedoya also joins Angélica Lozano in the political advancement of the LGBTI community in various levels of politics. In 2014 Lozano became the country’s first out LGBTI legislator at the national level when she was elected to the Colombian House of Representatives.