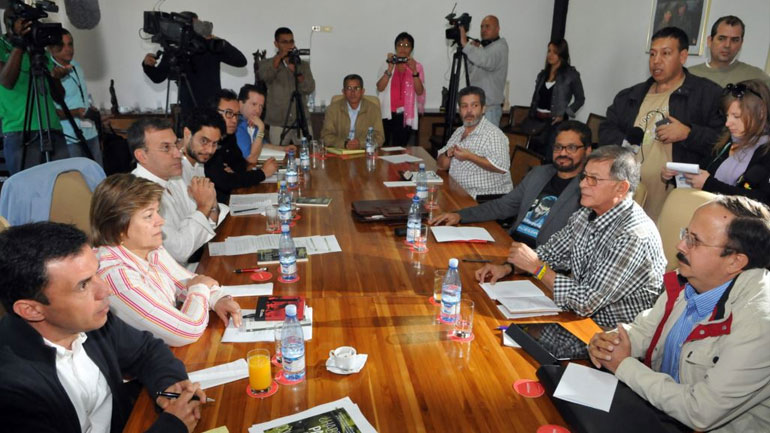 A number of NGO’s on Wednesday demanded greater participation of civil society in ongoing peace talks between the government and the FARC, Colombia’s largest guerrilla group.

The Civic Table for Peace, a diverse committee made up of key sectors from all sides of Colombia’s economy and society, seeks to construct “another table” for peace negotiations apart from the agreements in Havana, where representative citizens can sit down to discuss the country’s new path to democracy.

“We are laying out a table particularly for a part of society that has been excluded in social, economic and political terms. The Civic Table for Peace will create a stage for the negotiations of social conflict under the consideration that the conflict in the country is social, economic and political — not just militaristic. The resolution of structural problems in the country requires the inclusion of the society to democratize the country and ensure human rights,” Enrique Leon, a leader of the new initiative, told Colombia Reports.

The Civic Table for Peace will host its first convention Thursday, November 4, in Bogota, where distinct social organizations and movements will create an autonomous and open dialogue to raise awareness on social issues related to the decades-long conflict in Colombia.

“The initiative seeks to construct a scenario of direct negotiation between the government and civil society about the principle social conflicts that are alive in Colombia today… giving voice to widespread complaints and bringing to the table all of the issues that aren’t being discussed in the peace negotiations between the National Government and the FARC,” stated the committee’s press statement.

Invitees to the convention include three socially active Senators and personalities from the church, academia, human rights groups, women’s rights groups, indigenous peoples and Afro-descendants, to name a few — a panorama of actors to encourage democratic inclusion in the construction of Colombia’s post-conflict society.

Based on social perspective, this table will look fundamentally different than that of Havana and will be an effectively independent entity.

In the Civic Table’s manifesto, “A call to strengthen participation of society in the peace talks,” the founders state that peace in Colombia is incomplete without the inclusion of all who have suffered the conflict, which the country is currently working to end.

The leaders believe the current negotiation table between the National Government and the FARC in Havana excludes civil society from participating in its own country’s post-conflict reconstruction, and is not sufficient in creating a truly democratic, legitimate peace for Colombia.

“We want to propose to (the peace negotiators) that it is necessary to shape a social goal for peace and that, although we support and respect them, the tables between the insurgency groups and the National Government aren’t sufficient. So far there has not been a participation of society in the agenda in Havana,” stated Leon.

Participants in the Civic Table for Peace thus raise as their goal the bridging of the gap between institutional, economic and political powers and social movements in a key moment of structural transformation for Colombia. The committee emphasizes the specific need for civil society on certain issues in the agreements in order to construct a peace that will be accepted by the Colombian people.

“In relation to the agricultural policy, the mining policy, security, democracy, human rights — these are the issues that transform the country out of conflict. To achieve a peace that is effectively supported by society, one that is dignified, legitimate and respected, we will include all actors in Colombia in the agreements at our table,” stated Leon.

The committee leaders have called directly on President Juan Manuel Santos to establish a mechanism for social movements to be included in the decision-making processes.

Although, the Civic Table for Peace recognizes there is much work ahead in achieving true societal participation in the peace negotiations, its members believe common ground will prevail between the two tables in the continuous development of democracy in Colombia.

“We know it’s not going to be easy but we trust that the policies of the government can be linked to the social issues to bring a solution to the conflict in the country,” Leon stated.