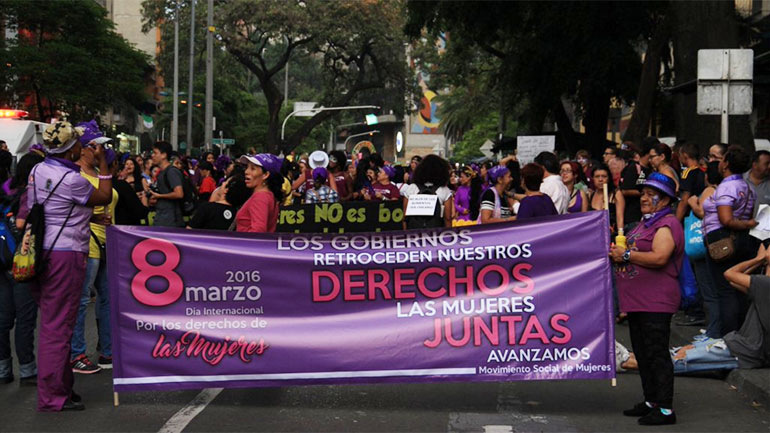 Hundreds of protesters took to the streets of Colombia on Tuesday, International Women’s Day, to raise awareness about women’s rights and ongoing gender inequality in society.

Banners and flags revealed messages such as, ‘My life and my sexuality do not kneel before the patriarchal state” and “Whore or not, my rights are not discussed,” said one participant of a Slut Walk that was organized in Bogota. Some chose to paint their bodies with such messages.

Protesters in other cities took a more conventional approach to demanding gender equality.

A leader of the initiative in Bogota, Mar Candela, urged society to address the question of gender inequality.

“It should be very simple to understand that the occupation and exercise of sexuality, regardless of what it is, must be respected. Nothing justifies violence against us,” she said speaking in the nations capital.

“All women who are silent about violence and abuse for fear of what people say. I will tell the country, whores or not, we are all fucking free, “she added.

The protests which were organised to coincide with International Women’s Day, sought to highlight the problems of domestic violence and femicide, defined a the killing of a woman by a man because of her gender.

Last year, Colombia followed the lead of 15 other Latin American countries by introducing a specific law against femicide. The law, which came into effect July 6, makes femicide a distinct and legally defined crime, with jail sentences of 20 to 41 years.

The sentiments expressed by the protesters yesterday, strongly urged a change of attitudes towards women in Colombian society.

“Nobody has the right over our bodies. Whore, executive or housewife, we all have equal rights, “said Diana Alvarez, who is not part of any particular activist group.

Heather Jarvis the co-founder of Slut Walk delivered a message on International Women’s Day from Canada. She urged the protests to continue beyond a single day of activism.

“You care about what you create, and you should care just as much about what you leave behind, from your language to your legacy,” she said. “I want all of us to commit in our communities and for our feminism, no matter how hard it is, to be here again tomorrow — not just one day a year — and then the next day.”

Slut Walk grew from a single event by a small group of people in Toronto in 2011 to 150 locations that year. It is now taking place in more than 300 cities in six continents around the world.