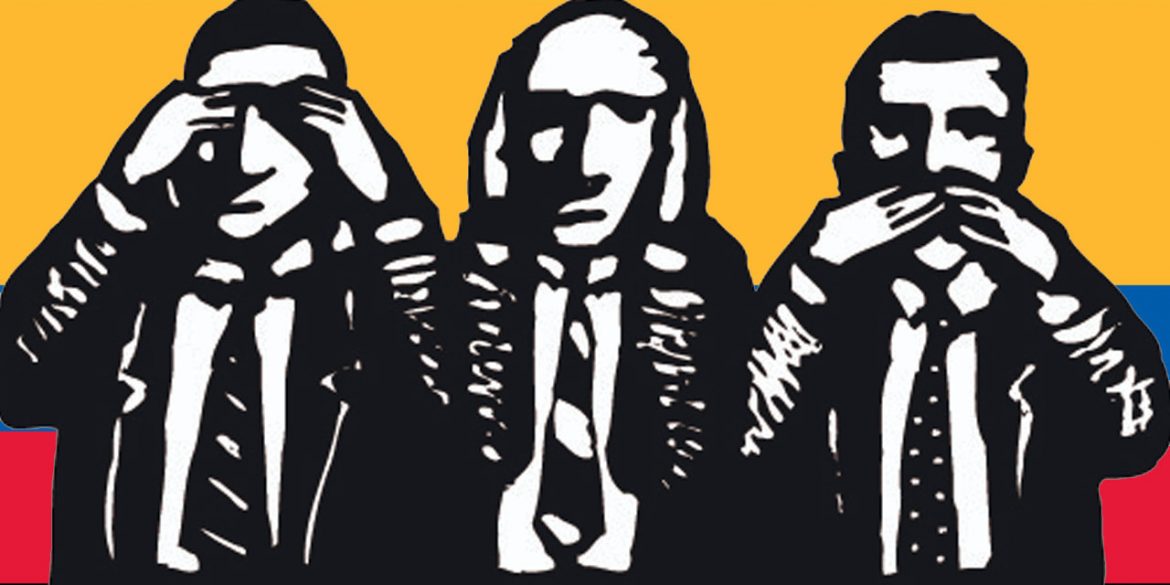 See nothing, hear nothing: more than half of Colombia left without local news

More than half of Colombia has no access to local news, it has been revealed. 578 of 994 municipalities mapped by press freedom foundation FLIP are “silent zones” where no news outlets produces or provides local information.

The reality is alarming. Colombia’s armed conflict established the perfect conditions for silence and censorship in both cities and villages.

Every department in Colombia has a majority of silent zone municipalities or has insufficient local information, with the exception of the San Andres and Providencia archipelago, according to FLIP’s new research.

This news comes in the same month as their report which revealing that violence against Colombia’s press is at a 12-year high, with more attacks on journalists and communicators than ever. Local journalism is under threat from violence, economic pressures, vested interests, and governmental failures.

One throat, many hands: local journalism in Colombia

The department of Vichada (population 74,000) is suffering the most severely from this silence: 78% of the population live in ‘silent zones’. Vichada also has the lowest rate of Internet access: 0.2% of the population has access, and Internet speed is the second slowest in the country; downloading a file takes 75 times longer than in capital city Bogotá.

There is no real independence. In addition, there is fear for violent groups and threats against journalists.

A journalist from the municipality of Planeta Rica

The choking of local journalism is due to economics as well as violence: many are paralyzed by lack of profit, others are compromised by the interests of necessary advertising revenue – both government and commercial.

“For local journalists, there has always been a very tough situation. Opportunities and circulation are very limited – the market is very small so salaries are extremely low. That’s where the grey zones begin – many interests are mixed with journalistic work,” Germán Rey, author of the National Historical Memory Center’s report on violence against journalists.

FLIP found that 23% of the 638 media pay their journalists less than a minimum wage, and 42% do not offer them any type of employment.

Alternatives sources are failing to bridge the gap for local news

Across the world, digital sources of media provide alternatives or even replacements for print and broadcast media: in Colombia this is not the case.

A national average of 10% of the population has access to the Internet, varying between 0.2% and 16% across departments. Of 1,466 media outlets surveyed by FLIP, only 134 are digital.

There are, however, more than 350 community radio stations, as well as over 250 commercial stations and around 70 public stations in Colombia, where radio has played an strong role in politics and rural campesino activism. Community radio is a key medium for local news across the region, particularly in areas where literacy and the logistics of print media are a challenge.

These too are under-supported by government, and are even under attack. The National Federation of Community Media estimates that around 250 radios are at risk of closure from the Colombian government´s coercive charges for failure to meet technical requirements.

Local radio stations are key to peace in Colombia because they are located where the majority of violence takes place, where it is too dangerous for most journalists to travel and where local people truly know and understand the causes and impact of conflict on their communities.

A new scheme of community radio stations was promised as part of the Havana Peace accords signed with guerrilla group FARC. The government has yet to move towards launching this scheme.

Rising hostility towards media workers is a global trend

Vulnerability of local journalists is a trend globally: 97% of jailed journalists are local reporters.

The rise in attacks on media workers also fits a wider worldwide trend: numerous international organisations including the Committee to Protect Journalists, Reporters Sans Frontiers, and ARTICLE 19 have reported a deteriorating global environment for freedom of expression and unprecedented hostility against communicators.

International press freedom organization Reporters Without Borders, which ranks Colombia 130th for press freedom out of 180 countries, reports that murders, imprisonment, hostage-taking, and enforced disappearances of media workers have all increased.