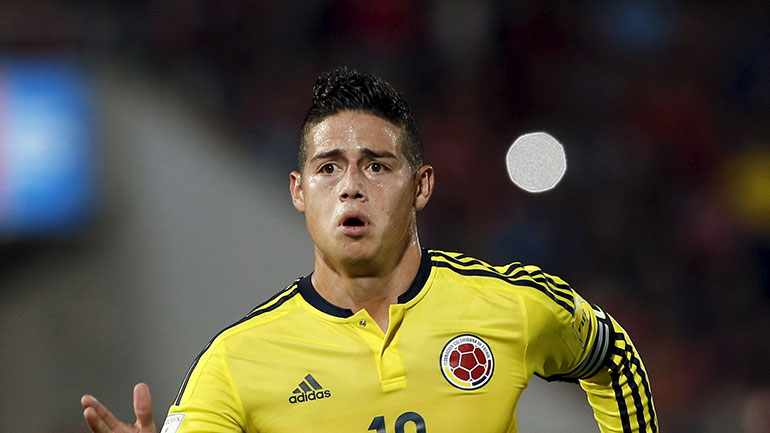 James Rodriguez struck in the second half to give Colombia a 1-1 draw away against Chile in 2018 World Cup qualifying on Thursday as the hosts dropped their first points of the South American campaign.

Chile appeared to be on their way to a third straight win in the group when Arturo Vidal headed them in front on the stroke of halftime.

Rodriguez, returning after missing the opening games through injury last month, had a subdued match until he levelled midway through the second half from one of several chances set up by the dangerous Luis Muriel.

South American champions Chile, unbeaten in their last 10, have seven points from three games and Colombia, quarter-finalists at the last World Cup, have four.

Alexis Sanchez nearly gave Chile a first-minute lead when his shot was turned away by David Ospina in the Colombia goal and he sent another effort narrowly wide with a shot on the turn just after the half hour.

At the other end, Jackson Martinez and debutant Daniel Torres both went close for Colombia, who were beaten 3-0 in Uruguay in their previous outing.

Chile, who had struggled to create openings despite having more possession, broke through in the 45th minute when Matias Fernandez floated over a free kick and Vidal took advantage of poor defending to head in his 13th international goal in 72 outings.

Muriel had been a surprise starter for Colombia, who were missing Radamel Falcao through injury, but inspired their revival in the second half as Chile decided to play a waiting game.

He set up one chance for Rodriguez, who wasted it with a weak shot at Bravo, and then saw an effort of his own deflected wide after a powerful run down the left.

Muriel’s persistence paid off in the 67th minute when he broke down the left again and while his cross was cut out, the clearance went to Rodriguez, who failed to control the ball with his first touch but regained control quickly and scored with a shot on the turn from 12 metres in the 68th minute.

The final 20 minutes was an end-to-end affair and Colombia nearly grabbed a winner when Bravo just managed to stop Edwin Cardona’s shot.

(Writing by Brian Homewood in Berne; Editing by Peter Rutherford)