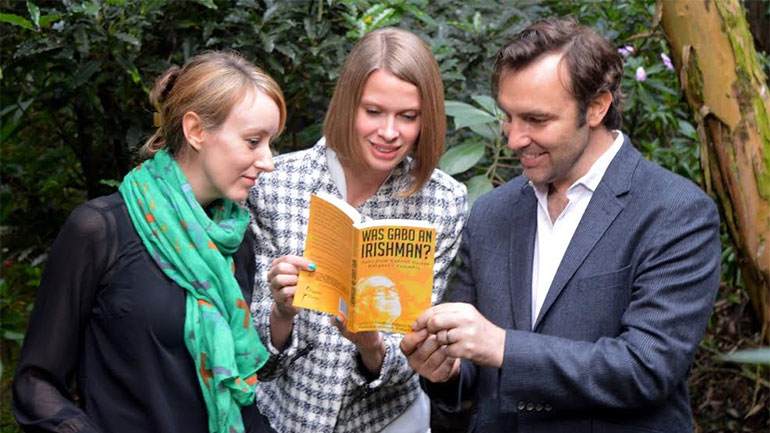 Review: “Was Gabo an Irishman?”

It is a brave person who decides to dissect the relevance of Colombia’s greatest literary icon in the immediate aftermath of his demise, but this is precisely what this courageous collective of British ex-pat writers based in Bogota chose to do when they compiled “Was Gabo An Irishman?“.

And the range of topics covered in the compendium is eclectic. McColl discusses the hazards facing the working journalist in Colombia in the shadow of Garcia Marquez’s masterly sinister “News of a Kidnapping.”

Barry Max Wills, “half Australian, half British and half Colombian,” demonstrates that Gabo’s much celebrated magical realism is alive and well and could be coming to a finca near you.

And Charis McGowan equates the chaos of the Colombian Caribbean coast to the meandering trajectory of a Garcia Marquez novel – both riddled with gossip and scandal where ‘the dead speak as loudly as the living and there is no such thing as silence’.

A point reinforced by Victoria Kellaway and her partner, the musician Carlos Mario Zabaleta, both of whom draw parallels between the narrative prose in the novels and the lyrics to traditional Vallenato music, the accordion-led soundtrack to life in Colombia.

As for Gabriel Garcia Marquez’s credentials as an Irishman, alas they amount to nothing more than a tantalising diversion – though there is no doubting that he had the gift of the Gab-o! Caroline Doherty de Novoa in her eponymous contribution points to the Irish love of gossip – a trait shared by the Colombian author. She quotes the Irish-American writer William Kennedy, in turn quoting Garcia Marquez: ‘I read all the gossip in all the magazines and I believe it all’ (he was reading a book about Jackie Kennedy’s chauffeur at the time).

Whilst in many people’s eyes, Garcia Marquez is synonymous with the spirit of Colombia, the writer spent many years living outside the country in Venezuela, in Spain and, finally, in Mexico. But like James Joyce – who found it necessary to leave Dublin in order to write about it – perhaps Gabo’s self-imposed exile simply served to reinforce his own devotion to the country of his birth and its spiritual heritage.

Largely raised and greatly influenced by his maternal grandparents, it was his grandfather (the ‘Coronel’) who instructed the young Gabo on the country’s history and its bloody political allegiances. From his grandmother came tales of the supernatural: premonitions and portents that tapped into the Colombian soul. Together, they combine the magical with the all-too-often shocking reality, which became the hallmark of Gabriel Garcia Marquez’s work.

And it is a reflection of Garcia Marquez’s ability as a writer to reach out to readers far beyond Colombia that such a disparate group of foreigners have been sufficiently inspired by his words to pay tribute to the great man in this absorbing book.