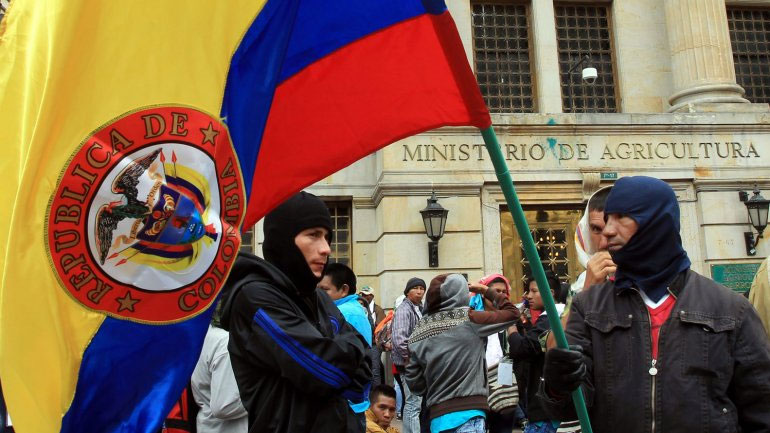 Some 100 masked protesters occupied the Colombia’s ministry of agriculture in the capital Bogota on Tuesday in an escalation of a demonstration by farmers that began on Monday.

The protesters blocked the entrance and exit to the ministerial building on Tuesday morning, demanding that the ministry “complies with agreed commitments and that President [Juan Manuel] Santos guarantees the right to protest”, a spokesperson for the group told Caracol radio.

The authorities said that they have since regained control of the building and evacuated the protesters.

The occupation occurred in the middle of a peaceful protest, which saw 5,000 farmers from rural areas arrive in Bogota on Sunday, demanding answers from Santos, who has failed to keep promises he made in negotiations to end a major agrarian strike in 2013.

That year saw Colombia’s biggest national agricultural strike of this century, in which 12 protesters were killed, nearly 500 wounded and six hundred were detained, according to reports.

The strikes were spurred by an agricultural crisis following decades of admitted government neglect of Colombia’s rural economy.

In order to end the strike that threatened urban food supplies, farmers’ organizations and the government agreed to a number of measures that would stimulate the rural economy and protect small farmers from competition with large multinationals.

However, claiming the government had failed to follow up on the made agreements, smaller strikes and protests emerged in 2014.

According to the groups involved in the current movement, less than 70% of over 200 agreements reached with the government in 2013 have been met.

Moreover, the protesters have said, the government has implemented policies that contradict the previously made agreements.