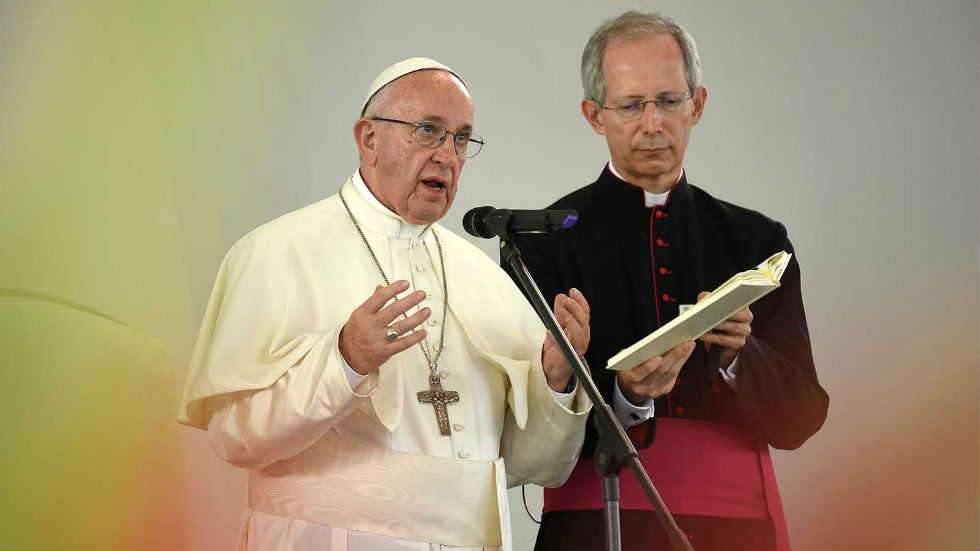 Pope Francis urged Colombians skeptical of a peace deal with guerrillas to be open to reconciliation with those who have repented, speaking hours after a top rebel leader asked the pontiff for forgiveness.

“Dear people of Colombia: do not be afraid of asking for forgiveness and offering it,” he said, at an emotional meeting that brought together victims of the 50-year civil war with former guerrilla and paramilitary fighters.

The Argentine pope, leader of the world’s Roman Catholics, is visiting Colombia with a message of national reconciliation, as the country tries to heal the wounds left by the conflict and bitter disagreements over a peace deal agreed last year.

Francis flew to the city of Villavicencio in Meta province, a vast cattle ranching area which was a hotbed of right-wing paramilitary and Marxist guerrilla violence during a conflict with successive governments.

As he arrived, former Revolutionary Armed Forces of Colombia (FARC) rebel leader Rodrigo Londono, now the head of a new political party, issued an open letter to the pope asking for forgiveness for the suffering the group inflicted.

“Your repeated expressions about God’s infinite mercy move me to plead your forgiveness for any tears or pain that we have caused the people of Colombia,” Londono, who goes by the alias Timochenko, said in the letter.

Tens of thousands of ecstatic people in this humid area of savanna and shantytowns packed the roads as the pope, riding in the front seat of a simple car, passed by on Friday morning after his plane arrived from the capital Bogota.

The pope’s afternoon prayer meeting in Villavicencio with about 6,000 survivors of the brutal conflict was the centerpiece of his five-day trip to overwhelmingly Catholic Colombia.

He listened to personal accounts from four people, including a woman who joined a paramilitary group when she was 16, a former FARC guerrilla, and two victims of violence between the guerrillas and paramilitary squads.

One of the victims, Pastora Mira García, told how she lost her father, husband and two children in the conflict. To great applause she urged forgiveness to “break the cycle of violence” and said she could now “name the unnamable and forgive the unforgivable”.

On the wall of the stage was a destroyed statue of Jesus Christ recovered from a church attacked by the FARC in 2002 in the rain forest village of Bojaya. About 80 people were killed as they sought refuge from rebel bombings inside the humble church.

The plaster figure, without arms or legs, has become an enduring symbol of the war.

“As we look at it, we remember not only what happened on that day, but also the immense suffering, the many deaths and broken lives, and all the blood spilled in Colombia these past decades,” the pope said.

Conflict between right-wing paramilitary squads, Marxist rebels, and government forces since the 1960s has killed more than 220,000 people and left millions more displaced.

Now Colombians are deeply polarized as they prepare to receive 7,000 former fighters, such as Londono, into society.

Many are furious that under last year’s peace deal, FARC leaders accused of kidnapping and murder will avoid jail sentences and may receive seats in congress as members of a new political party.

“Undoubtedly, it is a challenge for each of us to trust that those who inflicted suffering on communities and on a whole country can take a step forward,” he said.

“Let us heal that pain and welcome every person who has committed offences, who admits their failures, is repentant and truly wants to make reparation.”

As he left Villavicencio, he stopped to pray at the Reconciliation Cross, a memorial to survivors and those killed during the war, and planted a tree as a symbol of peace.

Earlier, Francis celebrated a Mass for hundreds of thousands of people on a muddy field to beatify Pedro Maria Ramirez, a priest who was killed in 1948 during a period of political violence known as “La Violencia,” and Bishop Jesus Emilio Jaramillo, killed in 1989 by the National Liberation Army (ELN) for suspected collaboration with the military.