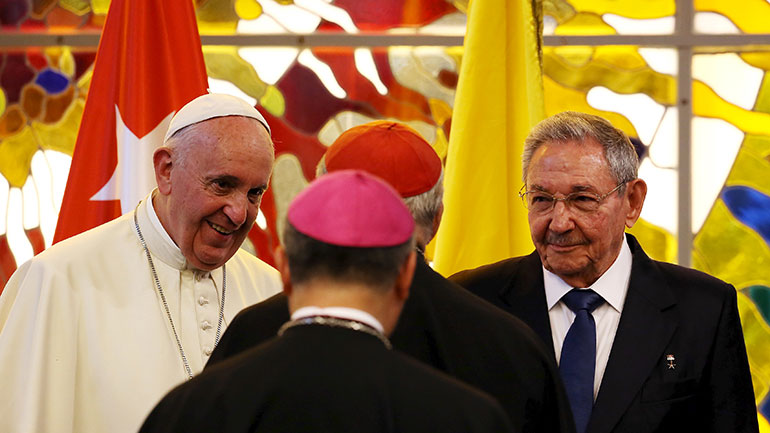 Fresh off his personal appeal to the U.S. and Cuban leaders to end their half-century of estrangement, Francis issued his plea to Colombia’s warring factions from Havana’s Revolution Plaza at the end of his Sunday Mass. Cuba has hosted peace talks for more than two years between the Revolutionary Armed Forces of Colombia and representatives of Bogota.

“May the blood shed by thousands of innocent people during long decades of armed conflict” sustain efforts to find a definitive peace, he said. “Please, we do not have the right to allow ourselves yet another failure on this path of peace and reconciliation.”

Colombian President Juan Manuel Santos, who has pushed the talks, issued a tweet in response to thank the pope “for your permanent prayers. We will continue on the road of peace and reconciliation.”

The FARC leader known by his alias Ivan Marquez quoted the pope in a tweet of his own: “As the pope said: We don’t have the right to allow another failure in this path of peace and reconciliation. We need a peaceful society.”

In his remarks, Francis added on a word of gratitude to President Raul Castro for his efforts to assist the negotiations; the appeal was followed by a round of applause from the crowd.

In more than two years of negotiations, rebel and government negotiators have reached tentative agreements on land reform, how to jointly combat drug trafficking and the future role in politics for guerrillas that lay down their weapons. The rebel movement, known as the FARC, in recent months also has largely adhered to a unilateral cease-fire, prompting the government to suspend the aerial bombing of guerrilla camps.

But despite the advances, a number of obstacles remain to ending the half-century conflict, chief among them the thorny issue of whether rebel commanders behind scores of human rights abuses will be punished with prison time.

Polls indicate most Colombians support a negotiated settlement but have increasingly little faith the FARC will deliver on its promises.

The FARC leader, Marquez, said in August that the rebels wanted to meet with the pope during his visit to Cuba, saying it would help reinforce the efforts of millions of Colombians.

But the Vatican made clear no such meeting would take place, given Francis wanted his visit to focus on Cuba. His appeal Sunday appeared to be a way to address the conflict without derailing his overall Cuban focus.