Bicentennial Park, set on the edge of Medellin‘s downtown area, offers sprawling green scenery with an impressive view of the surrounding hillside valley–a great urban space for social and cultural events in the heart of Colombia’s second largest city.

Parque Bicentenario as it is called in Spanish is located next to the Memory Museum in the eastern area of the La Candelaria neighborhood in the central District 10.

The park opened to the public in 2010 and serves as a commemoration of Colombia’s 200 years of independence.

Night and day, locals come to the park to sit on the concrete walls that surround the park. Many bring lunch and sip on aguapanela, a local juice made of sugar cane and lime. On hot days, you can find shadow under the trees by the Santa Elena creek.

La Playa before paving the creek

The park is a part of a fascinating piece of Colombian history as it runs linear with the Santa Elena creek. Historically the creek ran through the nearby avenue of La Playa — traditionally one of the main streets crossing the old city from east to west but was paved over in the 1930‘s.

Today the creek remains buried under La Playa except for the last open air basin which runs through the park, sometimes leaving a somewhat unpleasant smell. 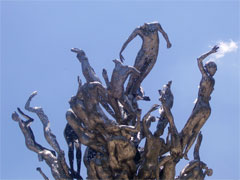 The Tree of Life

The Tree of Life

At the side entrance of the park stands the “Tree of Life.” The sculpture is constructed of 27,398 knives collected through disarmament in Medellin neighborhoods. Sculptor Leobardo Perez Jimenez molded the material into intertwining human bodies creating the shape of a tree.

The piece demands a second look as it represents the past and present struggles of Colombia. The winding compilations of weapons recalls a powerful symbol of  tragedy, yet also a token of reconciliation. The tree stands as a reminder to choose life over death and that a country’s past does not define it’s future.

An interactive cascading wall of water–the first of it’s kind in Latin America–faces La Playa and is often enjoyed by children playing under the jets of water. At night, colorful messages are normally projected onto the water screen.

Currently, the water is no longer running and it remains out of order. Nonetheless, one can still admire the dimensional architectural features of the wall.

Walk toward the Memorial Museum and you will find a generous donation from the Indian Institute for Cultural Relations in the form of a bronze statue of Gandhi. The statue also enhances the collective message of “peaceful coexistence,” a constant message highlighted throughout the park.

If in the area, take a stroll through the park, admire the architecture of adjacent Memorial Museum or simply lay in the grass and soak up the Medellin sunshine. It is undoubtedly worth a visit.