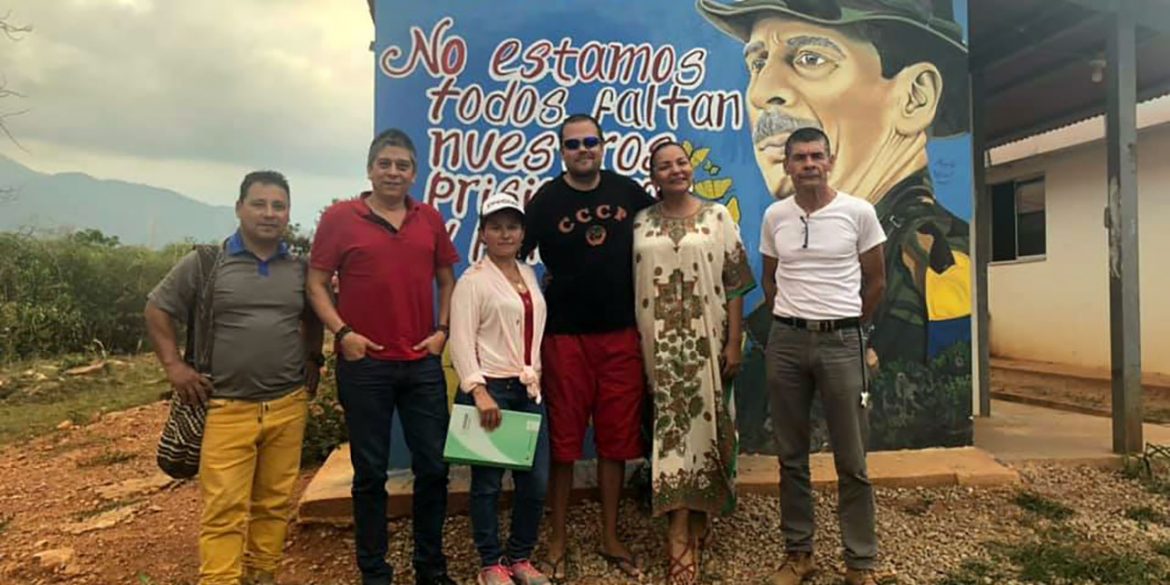 On holiday in Colombia with certified terrorists

I took a vacation with former FARC guerrillas, who are still considered terrorists by Uncle Sam despite ecotourism being their main occupation after a 2016 peace deal.

The getaway began on a hot, sunny day. We were picked up by two members of the security detail; pistols tucked under their shirts and a bulletproof vest in the back seat.

Our hosts have to hire private security for protection against paramilitaries. They don’t have as many problems in this part of the country, but you can’t be too careful.

We drove from the city of Valledupar in eastern Colombia, near the Venezuelan border, across dry, dusty plains that looked like the African Savannah, taking a left past an army checkpoint into the hills.

There, after driving along a bumpy path past tall trees and overgrown vines, we reached the rebel camp. 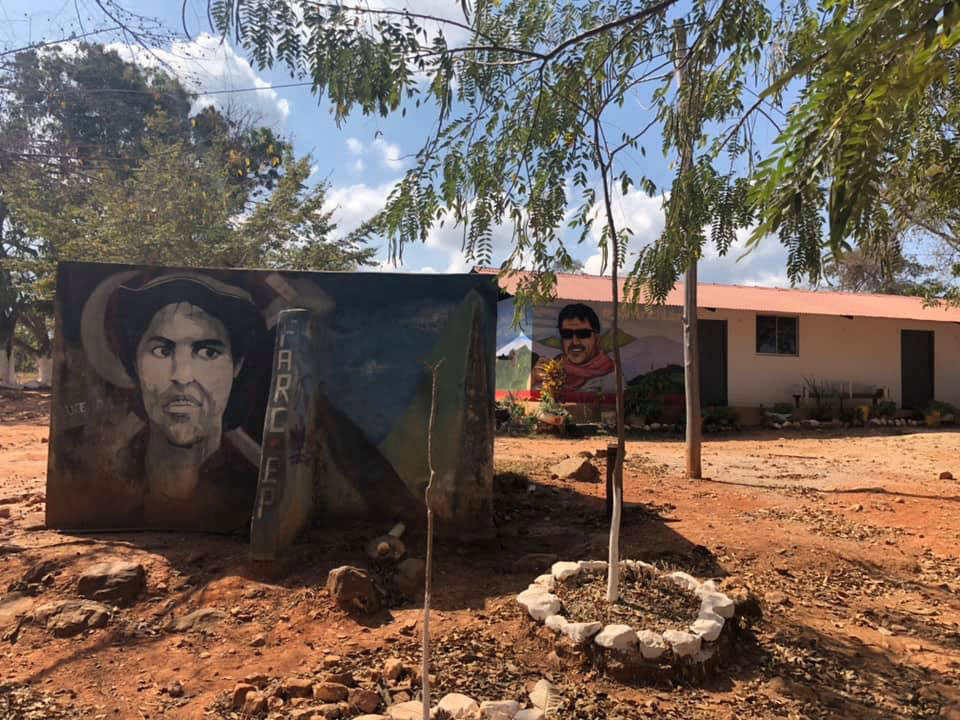 Since the days of Pancho Villa, the rugged, bandoleer-wearing Latin commando battling the military through the jungles of a corrupt banana republic has become the stuff of legend. For others, it conjures up images of blood and mayhem. But now, you can actually meet them.

In the 1970s and 80s, Central and South America was on fire. The Sandinistas were rebelling in Nicaragua; brutal juntas seized power in Brazil, Chile and Argentina; civil war in El Salvador; and Peru’s Shining Path had the most radical plan to remake society since Pol Pot brought Cambodia back to Year Zero.

Among these battle-scarred hives of destruction was Colombia, where drug lords, rebels, paramilitary groups and government forces made it the world capital for kidnapping and murder. In other words, not somewhere you’d want to spend your gap year.

The civil war’s been raging since 1964, when a peasant revolt morphed into the Revolutionary Armed Forces of Colombia, or FARC. It was the Cold War, and the rebels looked to the Marxist-Leninist principles of the Soviet Union to fight injustice and inequality. The landed gentry struck back, hiring ruthless death squads to terrorize the countryside.

In the late 80s a truce allowed the rebels to lay down their arms and go into politics. But the death squads, hell-bent on eradicating the commie threat, were lying in wait. Thousands of activists disappeared… permanently.

There were mass defections back to the armed wing of FARC and the uprising came back with a vengeance. It got to the point where the rebels controlled a territory the side of Switzerland, but with less cuckoo clocks and more Kalashnikovs.

That’s been changing in the last few years. Since a peace treaty was signed with the main rebel group in 2016, the murder rate’s fallen to its lowest point in decades, and gringo tourists have poured in to marvel at the rainbow-colored rivers, and the lost cities of the Sierra Nevada.

For the more morbid traveler there are the fascinating (if slightly tacky) Pablo Escobar tours, as well as an opportunity to stay over with the most elusive tour guides – the rebels themselves.

The rebels don’t advertise much (maybe it’s a communist thing?). 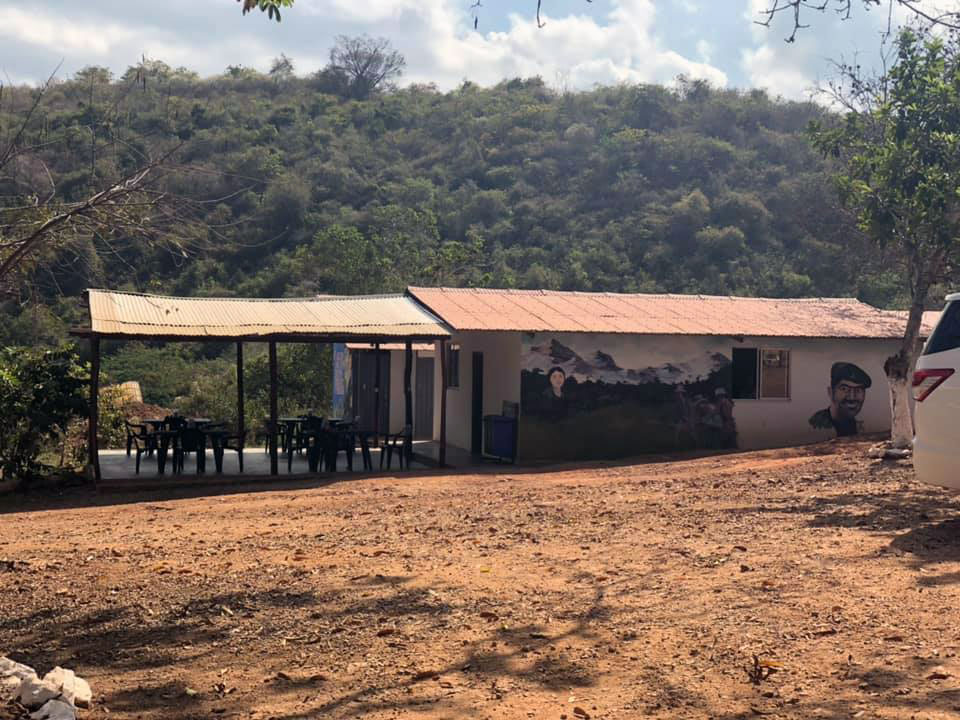 I only found about the Tierra Grata Ecotours after hours of pouring over the Internet, which led me to a WhatsApp number from the local tourist board.

When your daily life consists of shaking scorpions out of your boots between gun battles with heavily-armed soldiers it can be quite hard getting used to a 9-5, so they stay at these reintegration camps.

Some of the more enterprising of these camps have opened up to visitors, so you can have a taste of what life was once like. This camp, the Simon Trinidad Transitional Zone, hosts around 150 former combatants and their families.

“When I was six-years-old, my parents separated, and I grew up with my uncle,” said Felix, an ex-guerrilla in his mid-sixties who spent five years in jail for being part of the rebel movement.

I never had a strong mother or a father figure to teach me right from wrong. Then when I was twenty-two I met a girl, and she introduced me to everyone. In 1998, that’s when I joined the guerrillas.

Me and Felix talked over a meal of chicken, rice and sweet plantains. The reintegration camp is pretty modern, with electricity, running water and brick buildings adorned with murals of revolutionary heroes. The dining area had a breathtaking view of the Sierra de Perijá mountains, over which lay Venezuela.

“I was in a group of 500 fighters in the Magdalena region,” Felix continued. “We had our principal base, then we had to patrol for three days to watch out for the army and search for food. We’d rock up to these small towns strapped with our guns and that was usually enough for them to hand over their food. But these days it’s a lot easier. My worries before were looking out for helicopters; now I just worry about money.”

After our meal Felix took us through some woodland to see a recreation of the kind of camp they’d live in whilst hiding out in the jungle – makeshift wooden shacks, sticks and logs holding up camouflaged tent roofs. 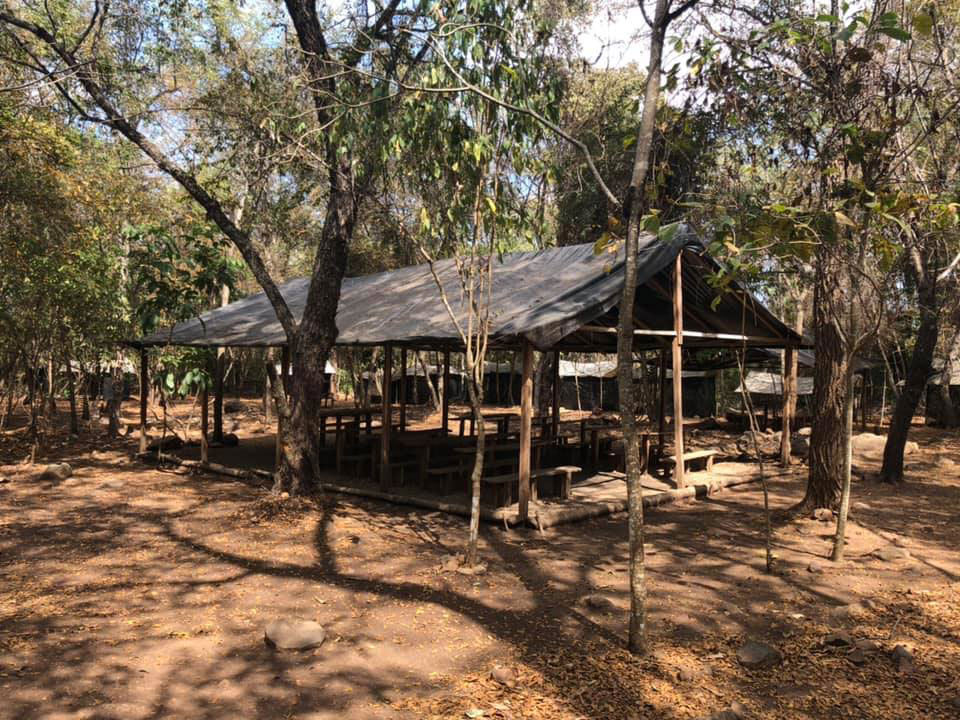 There, we were joined by two more rebels, Octavio and Cecilia. Octavio spent 24 years with the guerrillas, much of it in the Sierra Nevada mountains near Santa Marta.

“It was so cold up there you couldn’t move your hands,” he said. “You could see ice forming on top of the tent. But we had to keep moving. We didn’t recognize borders. One day we’d be in Ecuador, another we’d be in Venezuela. We’d walk for hours and hours. We couldn’t do anything consistently – we always changed our schedule.”

In the middle of the base stood an improvised classroom, where they’d hold meetings and classes in Marxism and hit-and-run warfare. Behind it was the kitchen, with a large, ‘Cuban-style’ oven where the chimney leads underground. This, Octavio explained, was so the smoke wouldn’t give them away.

Cecilia, meanwhile, was the battalion’s nurse, but she too wasn’t afraid to bust caps when things got hairy.

“Yes, once someone gets shot you use alcohol, just like in the movies. But you also use a lot of plants. That was my specialty. Marijuana, especially, has a lot of uses,” she said. “Small doses for pain are very effective.”

I should probably mention why I was in Colombia in the first place. I’d been trying to line up an interview with a FARC spokesperson for my book, Dopeworld, about one of this country’s most profitable business: cocaine. Then it got cancelled.

I soon found out why – a senior FARC leader had been accused of smuggling coke to fund the revolution, and the US wanted him extradited… bad. 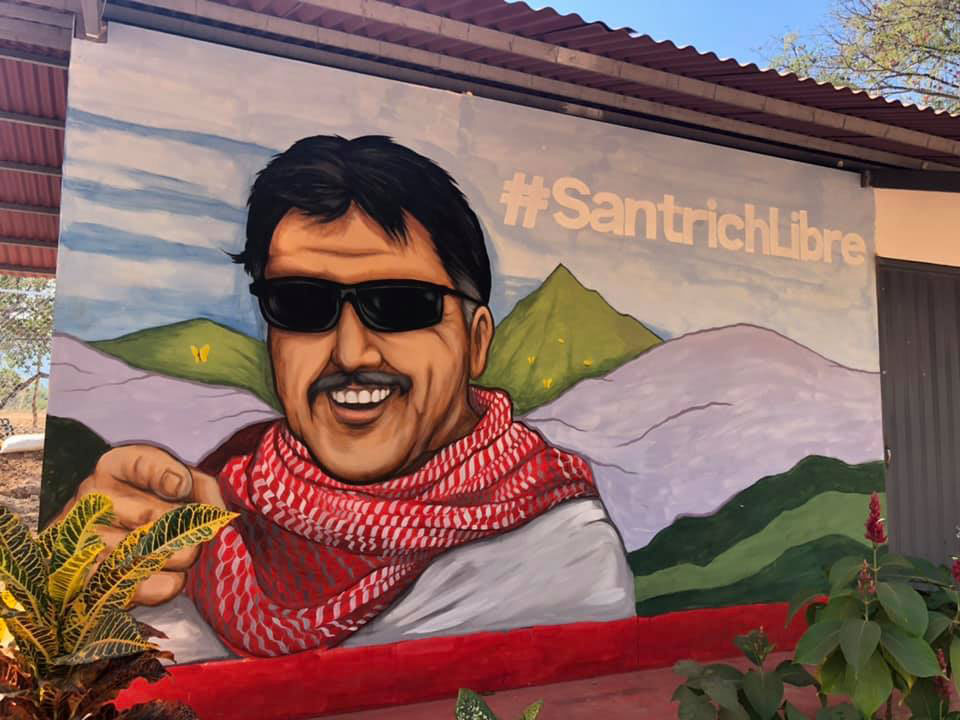 Colombia is the cocaine capital of the world, growing hundreds of thousands of acres of coca, the plant used to make the stuff. Suddenly no-one wanted to talk to journos, especially about cocaine.

But on our way back to the reintegration camp, I couldn’t resist asking the cheeky question.

“Yes, we managed the coca because it was a source of income,” said Octavio. “We didn’t smuggle it like the narcos, but we took their money and protected the farmers, and we laid out landmines to protect the crops.”

“For us it was forbidden to take any kind of drugs ourselves,” Cecilia quickly chipped in. “No marijuana and no cocaine; only on special occasions – alcohol. Then if we had a little party we put all our guns in one place and got someone to watch over them so we wouldn’t touch them if we were drunk.”

Now would be a good time to mention that Felix, Octavio and Cecilia aren’t their real names.

“For security, when you join the FARC you get a new name,” Octavio explained. For example FARC’s leader, Timochenko, is named after a Soviet general in WWII. “We had to change our names because if we used our real names, the government would kill our families. They’d go after our brother or sister.”

“Sometimes it’s hard for us to get back to our real names, because we’ve been living with these codenames for 20-30 years,” added Cecilia. “I couldn’t know his name, and he couldn’t know mine, in case we were captured.”

After spending decades running through the forests and dodging government troops, the fighters found it hard to adjust to everyday life. But they’ve got everything they need here – pool tables, a bar – so there’s no need to head down to the city.

“I like lots of discipline and order, and here it’s the same. I feel like I fit in here. I don’t really travel much to the city,” said Felix.

There’s even a football pitch where the rebels have a kick-around by themselves, with the police or people from nearby towns. That’s right – the police, once charged with hunting down terrorists, now play footie with them.

“We want to spread the message that it’s nothing like how we were before,” Cecilia said. “We want to show the people we want peace.”

The former band of jungle revolutionaries are trying very hard to be candid, generous and super-friendly, probably working hard to overcome their reputation for setting off bombs and holding guns to people’s heads. So here’s a question that begs asking – is this all ethical?

Some 260,000 people have died in Colombia’s armed conflict, with many more crippled and wounded.

While right-wing death squads were responsible for the bulk of the killings, the rebels have done their fair share, including a bombing at a Bogota nightclub that killed 36. You wouldn’t ride elephants in Thailand, so is it OK for us privileged gringos to go play Che Guevara in the woods and give these people money?

I’d say yes. The way I see it, you’re not rewarding their crimes, you’re chipping in to the peace process — a peace process the Colombian government has abandoned, leaving the rebels to fend for themselves.

Your money helps pay for the guerrillas to leave the run-and-gun lifestyle behind: Cecilia grew up in the jungle, and she never went to high school. Now, she’s in the tenth grade.

They get some money here and there, mostly from foreign governments, but soon that money’s gonna run out.

Then there’s another problem. In many parts of Colombia, hundreds of local activists, environmentalists and community leaders have been murdered on former FARC territory – a power vacuum filled by narcos, dissident rebels and paramilitaries, in cahoots with government forces.

Colombia’s president Ivan Duque is in no hurry to live up to his end of the peace deal. Then just a few months after I left, gunman attacked two people from the camp, a young couple, and killed their seven-month-old baby.

Events like this could disrupt the precarious peace process with the FARC. Despite all of this, Felix remains optimistic.

“We’re strongly behind the peace here,” said Felix, thoughtfully. “Right now I’m at peace too, at one with myself. I’m doing things that contribute to society. I’d like to travel, to go to other countries and share my story.”

OK, so a trip to a demobilized guerrilla camp isn’t exactly Disneyworld. But if there’s one thing that should allay your fears of ending up in a hostage video with a blindfold over your eyes it’s this — this rebel camp has a freakin’ gift shop.

You can book a trip with Tierra Grata Ecotours here.

Author Niko Vorobyov is a government-certified (convicted) drug dealer-turned-writer and author of Dopeworld, a book about the international drug trade. You can follow him on Twitter. Dean Underwood contributed to the reporting of this article.