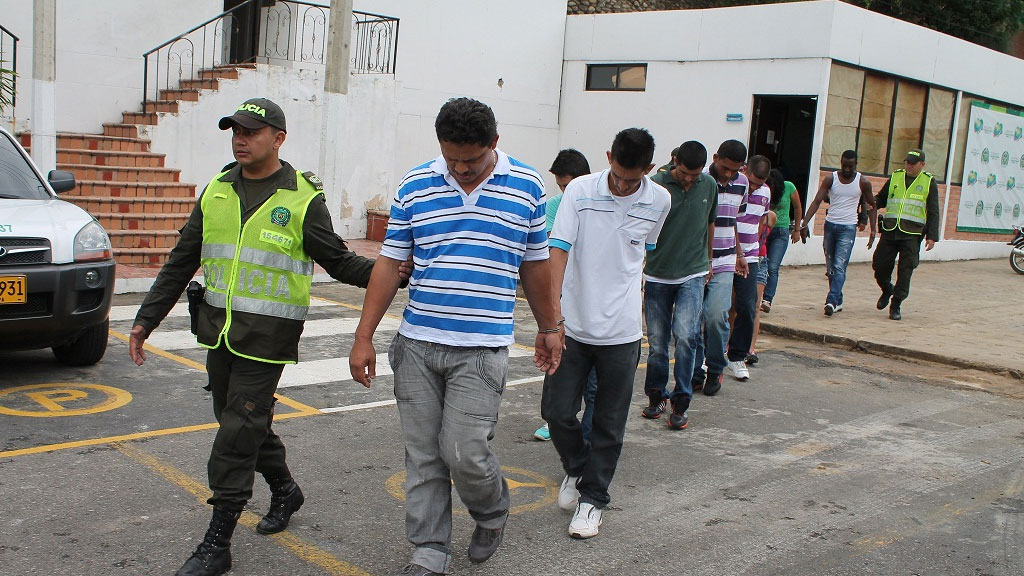 A major manhunt in the northwest of Colombia to catch Urabeños leader “Otoniel” has not led to the arrest of Colombia’s most prominent narco, but has resulted in the arrest if 72 alleged members of his neo-paramilitary group, authorities said Thursday.


Regarding the concern of whether alleged Ubreños leader, known only as his alias, Otoniel, has taken refuge in other countries, the Prosecutor General’s office has offered a $5 million USD reward to his capture in the United States. The same reward has been offered by the FARC, reported Medellin newspaper El Colombiano.

In reference to the capture of Otoniel, Minister of Defense Juan Carlos Pinzón said, “Sooner or later, he will fall. Sooner or later, his hour will come, and every blow gets us closer to that possibility,” according to Colombiano.

The 72 arrests are the result of an offensive launched in February by the National Police, by which they approved up to 100 arrest warrants and tripled the amount of police on the ground in search of Ubreño members.

Among the captured are aliases Rafa, Paula, Negro, Tito, Mandungo, and Napoleon, who were found in the municipalities of Antioquian Urabá, and Cordoba, reported Colombian newspaper El Espectador. Some 60 raids have taken place throughout the country since the offensive first launched.

The hunt for Ontoniel, reportedly the largest manhunt since Pablo Escobar. The Colombian government has been hunting for the rebels in “The Siege of Uraba” since the middle of February, with soldiers and policemen combing through the jungles and villages of northeastern Colombia weeks after authorities nearly nabbed the drug lord by accident.

The group is “a high value target and we will not stop until we have fully dismantled it,” Colombian President Juan Manuel Santos said in a speech given at the opening of the Regional Centre for Victims in Apartado, Antioquia, one of the Urabeños hotspots.

According to El Colombiano, this operation then extended to half a dozen other municipalities, all located around the gulf that’s been a key exit point for cocaine ever since the days of the Medellin Cartel in the 1980s and 90s.
Locals told Colombia Reports that the ground forces have received air support in Turbo, Chigorodo and Apartado.

The Urabeños maintain such freedom in the area thanks to “violent pressure on the community” and fragile non-aggression pacts with rebel group FARC.